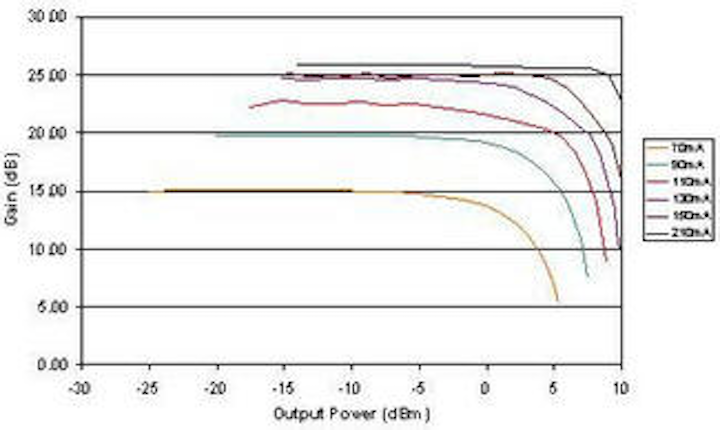 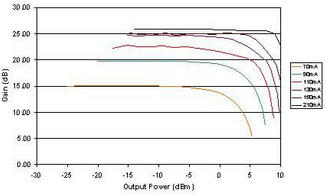 Figure 1. Gain as a function of output power for an SOA.

The intrinsic cost, size, and integration advantages will ensure that the semiconductor optical amplifier plays a key role in future metro networks.

The long-haul segment of the telecommunications infrastructure has huge bandwidth capability, and recent advances in the bandwidth available in enterprise networks (e.g., 10-Gigabit Ethernet) have shifted attention to the data "bottleneck" -- the metropolitan area network. Metro networks have to deliver multiple services at high capacity, over reasonable distances with maximum flexibility, and at low cost. This onerous requirement has until now resulted in difficult price/performance decisions, particularly concerning the use of erbium-doped fiber amplifiers (EDFAs) for amplification in WDM metro systems.

The requirement for low cost has also resulted in equipment vendors manipulating wavelengths in bands of, say, four or eight rather than individually, and designing static rather than dynamic systems. To enable the next generation of networks, a low-cost, compact amplifier is required that is able to amplify several channels simultaneously without interference, allowing more flexible and dynamic systems.

The semiconductor optical amplifier (SOA) is a highly versatile component that can be deployed to meet these expanding applications. The intrinsic cost, size, and integration advantages will ensure that the SOA plays a key role in future metro networks. Key requirements for the banding application are that the amplifier provides a fixed gain, independent of the number of wavelengths being amplified, and that this gain can be changed to provide flexibility to the system architect.

The SOA can be deployed in advanced networking scenarios in classic amplifier roles as long as operation in its linear regime is maintained. In this mode, it exhibits the characteristics of any linear amplifier, which permits its use in a wide variety of network applications, e.g., a receiver pre-amplifier.

To ensure linear functionality, one of the key operating issues with conventional SOAs is the management of the input power levels to avoid saturation. This is especially crucial in multi-wavelength applications where a band of channels are to be amplified, sharing the available output power. The gain of the SOA can be controlled by changing the bias current applied to the SOA. However, if the bias current is lowered to lower the gain, the saturation output power and hence the linear region also decreases, which in turn limits the dynamic range of the variation in gain for a certain output power (Figure 1).

In certain network applications the power level of each wavelength channel in a multiplexed signal is monitored throughout the optical path connection. Under theses circumstances, and as long as the input power levels of all the channels is sufficiently low so that when amplified the total output power requirement falls within the linear region of the SOA characteristic, each channel will suffer virtually no crosstalk.

As an example of this mode of operation, Figure 2 shows the output eye diagram for one channel (of four) of input power -20 dBm after amplification in a conventional SOA with a gain of 13 dB and output saturation power of + 5 dBm. This is a powerful route to bringing down the cost of amplification per wavelength channel, as the cost of a conventional SOA is shared over, in this case, four channels.

If the above operating scenario proves a significant overhead on the network management, then other SOA designs can be invoked based on gain clamping. Gain-clamping uses a laser cavity containing the active material of the SOA, but emitting at a wavelength outside the desired signal band. The lasing action in the cavity clamps the gain of the active material at the laser threshold, the clamped gain being imposed on the amplification of signals in the signal band.

Gain clamping occurs at the expense of gain variability in that the gain is clamped at a value fixed at the point of manufacture. However, there are many network application scenarios where it is desirable to provide a gain-clamped SOA characteristic for which the level of the clamped gain is controllable. The concept of gain clamping can be extended through the optical linear amplifier (OLA) design; this provides gain-clamping with variability of the gain at which clamping occurs, thus maximizing the saturation output power and linearity.

There is a growing need to manage increased loss budgets in metro networks, exacerbated by the introduction of optical nodes that facilitate and promote dynamic wavelength routing. These nodes are complex at the optical level and, in order to control costs, first-generation implementations are focussing on geometries that rely on the manipulation and switching of low-channel-count bands of wavelengths. SOAs provide a low-cost route to providing amplification in such scenarios.

The use of SOAs in multi-wavelength applications demands linear operation. Although dependent on the particular system design, the most straightforward route is to use a standard SOA, managing the power levels of the input multiplexed signal to maintain operation in the linear portion of the gain characteristic. 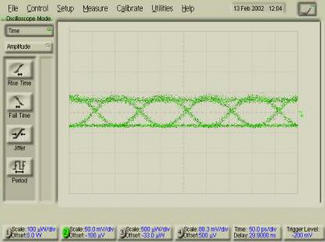 Figure 2. Output eye diagram for one wavelength channel from a band of four being amplified by an SOA. Input power per channel -20 dBm, gain 13 dB.
Latest in DWDM & ROADM