By ALISON MCCUAIG, Plaintree Systems--In fiber-based telecommunications, the LED is sometimes perceived as the poor cousin to the laser; however, most of the performance limitations associated with the LED are imposed by the fiber. 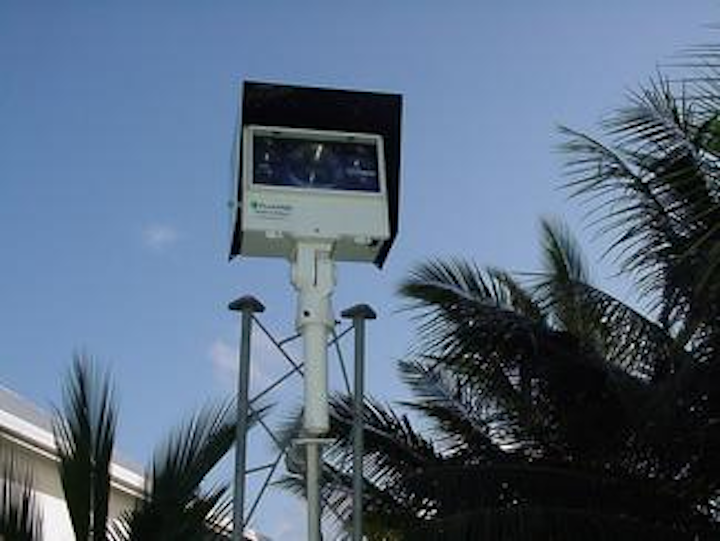 Dramatic growth of the Internet--and of the optical core network that supports it--has slowed, despite users' insatiable appetites for bandwidth-hungry services, particularly applications with video content. A lack of affordable, broadband transport facilities that extend optical rate connectivity over the last mile is a major reason.

Free-space optics (FSO) technology can provide the capacity of fiber in the last mile without some of the drawbacks and the high costs associated with ground operations (route planning, trench digging, and installation). Moreover, unlike other wireless technologies, FSO systems don't require spectrum licensing nor are they subject to frequency interference.

The source used in most FSO systems is either a laser, or a light-emitting diode (LED). In fiber-based telecommunications, the LED is sometimes perceived as the poor cousin to the laser. Most of the performance limitations associated with the LED are imposed by the fiber, however.

The LED emits light from an extended surface area in almost all directions and over a wide range of wavelengths. It is therefore a multimode, incoherent device and is similar in this way to the filament of an incandescent light with power efficiencies approaching 10%.

In contrast, the semiconductor laser emits light from a very tiny area in one direction at a single wavelength or a few wavelengths closely spaced together. It is a singlemode coherent device. The power efficiency can exceed 50%. Lasers can be modulated at very high rates (GHz).

The LED is a more reliable and robust device than a semiconductor laser because it uses much lower current and optical power densities, both of which are well under the stress limits of the materials. The operating device junction temperature is a critical consideration for device lifetime. A few extra degrees can reduce the lifetime by an order of magnitude.

To achieve a long life from a laser in a hot environment (equatorial rooftops), it must be actively cooled, a significant requirement to handle the sustained solar heat. The reliability of the cooler is likely then the limiting factor - a thermoelectric (Peltier) cooler consumes a high current.

Another way to increase the device's lifetime is by running it at a lower current with a lower output level. This is very effective with an LED where the output power is a direct multiple of the drive current. However, the laser is not able to benefit as much from this technique because it has a threshold drive current below which no light is emitted - unfortunately, the threshold current generates high current densities that reduce the product lifetime.

Easier on the eyes

Laser light can be far more dangerous to the eyes than LED light of the same power. This is because laser light can be focused to a very small spot several wavelengths in diameter where the light power intensity is correspondingly great on the retina. In contrast, LED light, which is from an extended multimode source, cannot be focused to less than the source area, typically more than 100 mm in diameter. For this reason, the potential retinal power density from a LED source is 3 to 4 orders of magnitude less than that of a laser source of the same power.

Standards bodies such as the IEC (International Electrotechnical Commission, Geneva) and ANSI (American National Standards Institute, New York) classify laser sources according to the level of risk. Most laser products are in a category where direct viewing of the source at close range for extended periods is considered dangerous and viewing the source using binoculars is dangerous even at extended ranges. Generally, the size of the transmitting lens is large enough to reduce the laser power density sufficiently to fall within a lower category of risk.

The range and availability of FSO systems is limited by atmospheric losses, especially fog. In the absence of fog, the atmosphere is generally clear, so a typical signal loss is only 0.5 dB/km.

Many narrow, high absorption wavelengths exist in the atmosphere, with pollutants, which can cause additional loss. These pollutants have little or no effect on visibility or on LED systems where the power is spread out over a spectrum about 50-nm wide. If one of these narrow absorption wavelengths corresponds with the wavelength of a laser system, the path loss may be significant, however. Lasers are generally not highly stabilized in wavelength, which can drift with operating temperature. Therefore, there is a probability that the laser's FSO system will drift in and out of absorption wavelengths resulting in reduced margins and availability.

To increase the amount of transmitter power and provide a soft failure mode through redundancy, some FSO systems use several lasers operating simultaneously. However, because lasers are highly coherent devices that are operated at nominally the same wavelength without wavelength stabilization, there will be occasions where two lasers have a wavelength difference so small that an interfering heterodyne beat frequency signal occurs in the receiver within the passband of the data. This will reduce the margin and availability of the system. A system with four lasers has six such potential problems. This same effect does not apply to LEDs because they are incoherent devices.

Diffusely reflected background sunlight can also degrade the margins of FSO systems. The sun can cause temporary outages when directly in the field of view of a receiver and there is a risk of permanent damage to devices.

The impact of sunlight can be mitigated by using a narrowband optical filter to pass the signal but block most of the sunlight. Because the laser has a very narrow spectrum, an optical filter for a laser system can be much more effective than a filter for an LED system.

Scintillation results from thermal gradients and turbulence within the optical path. These effects can cause different parts of a laser beam to travel slightly different paths and then combine. Because the laser is coherent, the recombination may be destructive or constructive at any particular moment. Typically, the laser beam cross-section profile will break up into dark and light areas changing rapidly with time. This results in recurring momentary losses of signal, degrading the performance of the FSO link. Being incoherent, the LED is far less susceptible to this effect.

While LEDs offer many advantages, there are instances when a laser source is the best FSO solution. Most commercial LEDs cannot be operated at speeds greater than 155 Mbits/sec. At this time, FSO systems requiring greater payloads--622 Mbits/sec and above--must use laser sources.

Alison McCuaig is in marketing at Plaintree Systems (Ottawa, Canada). The author can be contacted via the company's Web site at www.plaintree.com. 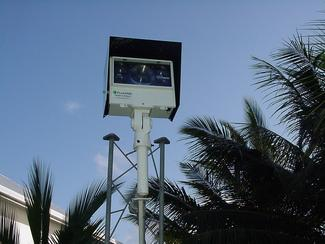 Plaintree's Wavebridge free-space optics system installed in the Maldives, southwest of India in the Indian Ocean.
Latest in DWDM & ROADM