The pairing of DP-QPSK and coherent detection has ushered in the era of 100-Gbps transmission. 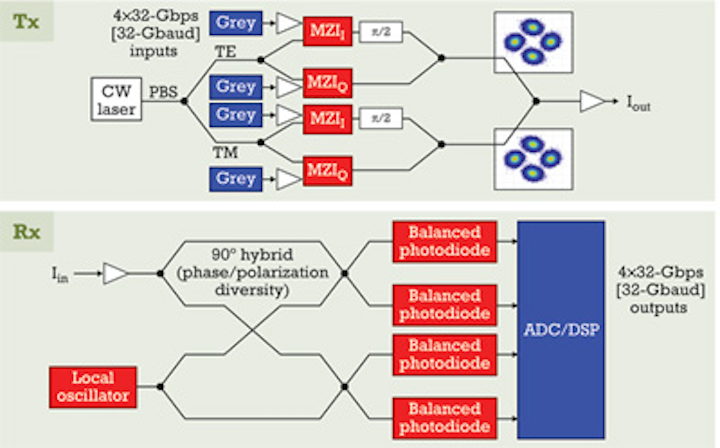 To keep pace with the rapidly growing volumes of data-network traffic driven by the growth of the Internet, service providers are always looking to increase the fiber capacity and wavelength spectral efficiency in their networks.

PSBT and DPSK offer increased spectral efficiency over OOK, while still coding 1 bit per symbol. DP-QPSK, on the other hand, codes 4 bits per symbol (in-phase and quadrature phase components of each polarization tributary). Coding more bits/symbol, enabled by the advent of digital coherent transmission, reduces the spectral width of the signal (to first order proportional to the baud rate). In fact, DP-QPSK is so spectrally efficient that it can propagate a data rate of 127 Gbps through many cascaded 50-GHz optical filters such as reconfigurable optical add/drop multiplexers (ROADMs). This higher 127-Gbps data rate not only allows payload transport of 100-Gigabit Ethernet (100GbE) traffic, but also OTU4 link management overhead and 20% overhead soft-decision forward error correction (SD-FEC) for high-performance applications.

Therefore, 100-Gbps transmission using DP-QPSK promises a good modulation format fit for DWDM networks operating on a 50-GHz grid. This promise was observed several years ago, which led the Optical Internetworking Forum (OIF) to make DP-QPSK its recommended modulation format for 100-Gbps line systems. The OIF’s recommendation focused investment and multisource agreements at the optical-component-and-module level and created an ecosystem that should accelerate network adoption of 100G DP-QPSK transmission.

Looking to the future, as Internet growth continues with expanding services such as high-definition video, mobile broadband, and telecommuting, the question is, how will optical transmission technology keep pace? Learning from other telecommunications fields such as wireless, satellite, radio, and DSL broadband access, we can say that all these media use coherent transmission and all increase transmission rates and spectral efficiency by coding more bits per symbol. For optical-fiber technology development, we should surely follow the lead from these other telecommunications industries.

But we in optics face some fundamental and unique challenges that make our life difficult:

Although these challenges appear daunting and formidable, it would be unwise to bet against human engineering ingenuity given time and money as history has proven. This area of optical communications research will be extremely fertile over the next decade and beyond.

The basic functional block diagrams for an optical coherent detection modulation scheme, with control of the amplitude of both in-phase (I) and quadrature phase (Q) components of the modulated signal, are shown in Figure 1. DP-QPSK codes 4 bits per symbol (for the I and Q components of each polarization multiplexed tributary), yielding a symbol rate of 32 Gbaud. The transmit side consists of nested Mach Zehnder modulator structures. The coherent receiver requires mixing the received signal light with a tunable-laser local oscillator. Polarization beam splitters and optical phase hybrids are included in the receive structure to provide polarization and phase diversity.

A key advantage is that the carrier phase estimator, polarization, and I&Q demultiplexing are all achieved in the electronic domain using very fast analog-to-digital converters (ADCs) and digital signal processing (DSP). This approach alleviates the traditional problem with optical coherent technology since this design does not require a highly stable optical phase-locked loop (PLL).

The critical enabling technology in this design is the digital coherent receiver (see Figure 2). The distorted signal coming from the four balanced photodiodes is first quantized using quad ADCs. The adaptive equalizer in the DSP then provides the equalization of CD, PMD, ROADM filtering distortion, and unwanted S21 transfer function imperfections in the Tx/Rx electro-optic drive chains.

Another critical enabling technology is next generation SD-FEC, enabling up to 3-dB higher coding gain than current state-of-the-art FEC. An FEC algorithm called low-density parity check (LDPC) is used, with increased overhead and soft-decision decoding of the input.

DP-QPSK at 100 Gbps offers the ultimate in optical performance and meets all the key market requirements dictated by large carriers. The challenge is that this modulation scheme is a much more complex than previous generations of optical transport equipment have used.

A high data rate can be achieved by coding multiple bits/symbol and using coherent detection and M-QAM modulation format. Present day optical transport data rates are limited by electronics speed; M-QAM enables data rates many multiples higher than the electronics speed. Although the use of QAM is well known in other industries like satellite and wireless communications, it has not been implemented to date for optical transmission.

A novel advantage of using M-QAM in DSP is that by enabling programmable modulation (e.g., from QPSK to 256QAM), the bit rate transmitted can be traded for optical reach, maximizing the data rate for any given link length and distortion properties of the channel. This capability is analogous to rate-adaptive DSL modems that maximize the data rate over local copper connections from local office to customer premises using a training sequence at installation.

Denser M-QAM constellations result in lower OSNR sensitivity and higher nonlinear distortion, resulting in reduced reach. Figure 3 shows the theoretical OSNR sensitivity achievable for different baud rates and M-QAM constellations. It should be noted that the achievable spectral efficiency is directly correlated with the number of coded symbols and the spectral width is directly correlated with the baud rate. For example, PM-16QAM@50 Gbaud and PM-256QAM@25 Gbaud both support 400-Gbps data throughput, but PM-16QAM@50 Gbaud occupies twice the spectral bandwidth.

The key optical component to help reduce nonlinearity is the optical fiber itself. New optical fibers with reduced attenuation, reduced nonlinear coefficient (n2), and higher effective core area would help to reduce nonlinearity and enable higher optical launch powers and hence increased reach. Such super-large effective area (SLA) fibers, which are already used in submarine network deployments, are a good step in the right direction. These fibers include Corning’s Vascade and OFS’s UltraWave.

Building on the foundation

The advent of coherent DWDM technology is enabling 100GbE transport over backbone optical networks with link engineering rules similar to 10-Gbps OOK channels. Coherent transmission enables a 10X scaling of network/fiber capacity without any change in DWDM channel spacing or DWDM common equipment design. The formation of a 100G DWDM ecosystem by the OIF in the infancy of this technology has helped focus R&D capital investment and should act as a catalyst toward early technology adoption by system vendors and service providers. Standardization by the IEEE of 100GbE and ITU on OTU4 encapsulation has also been critical in laying the foundation for this technology.

The migration to data rates beyond 100 Gbps faces some real challenges in terms of OSNR sensitivity and nonlinearity. Perhaps we will just use more wavelengths and fibers without increasing spectral efficiency. But that method will also run into scaling issues as fibers run out and managing too many DWDM overbuilds becomes unwieldy for carriers.

Coherent transmission certainly opens up the possibility of moving to higher order modulation formats and increased spectral efficiency. But to meet the optical reach requirements, we may need a fundamental improvement in optical fiber and/or optical amplification technology.

How to move beyond 100 Gbps will be a fertile area of optical research in coming years as engineers tackle how to scale optical transport data-carrying capability while staying within the fundamental constraints of Shannon’s Limit.