The factors that once drove networks from copper to multimode fiber are creating a demand for even newer alternatives. 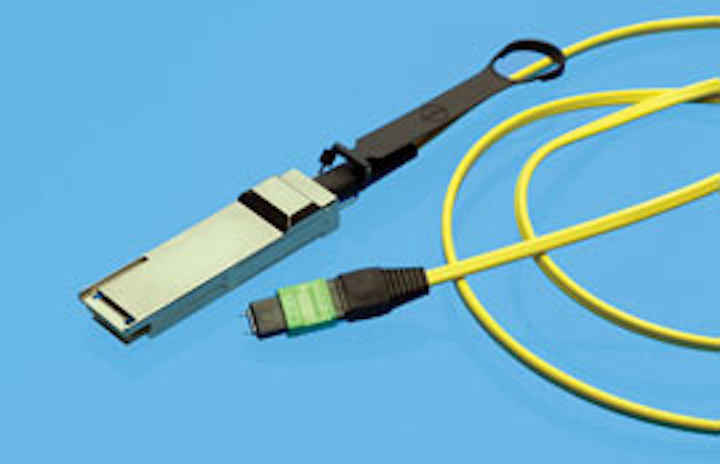 Multiple forces are driving the implementation of parallel singlemode quad (PSM4) and silicon photonics (SiPh) in next generation data-center designs and architectures. PSM4 and SiPh fill an important gap in data-center interconnect options -- the gap between the reach of 25G multimode options and that of long range (LR) optical approaches. Using pigtail designs with these technologies can ease implementation via easy mating to structured cabling. From a futureproofing perspective, PSM4 is an approach that can accommodate both current and future bandwidth upgrades.

The cloud. A 2011 study by IBM found that 70% of mid-sized businesses were using cloud-based analytics and 66% had already deployed or were planning to deploy cloud-based technologies.

Entertainment on-demand and mobile. Entertainment is transitioning to an on-demand/anywhere model. This requires large-scale infrastructure to store and support programming.

Big data. Recent advances in database management (most notably the development of Hadoop) enable large-scale data-based relational information, even where the data is in disparate types, formats, and across different systems. As a result, all data has begun to be stored indefinitely and mined for information and relationships. Due to all these factors, data centers are becoming larger and more distributed. Virtualization means that system architectures can be built with less equipment but with more interconnections. These next generation data-center designs typically require scalability and uniformity of performance coupled with low latency. Scalability is required to handle the expansion of services, addition of customers, and increase in data. Uniformity of performance is required to provide a smooth flow of data between nodes. The traditional three-tiered data-center architecture of core, aggregation, and access was well suited for traditional use of email, webpages, and traffic. However, new requirements for video and content delivery, virtual machines, cloud access, and social networking content assembly required low latency across the data center. Non-blocking bandwidth became both a requirement and technical challenge that demanded a new data-center architecture. "Spine-and-leaf" architectures resolve these issues. A central spine handles high-bandwidth data between leafs; each leaf controls the traffic flow between clusters of servers. The performance is thus balanced, while the structure supports the addition of leafs as the system scales. Traffic between nodes is balanced and accessible with low latency east--west traffic flow.

This type of architecture has many attributes; a physical one is the need for longer links. And that could mean a significant change in cabling.

Over the past decade, as data rates increased, the distances that copper interconnects could accommodate decreased to the point that alternative approaches had to be found. Each method came with increasing costs and implementation challenges. Ultimately, the crossover point occurred, and multimode fiber became the only viable solution for exceeding a certain combination of data rate and distance.

However, the same challenges have now arisen with multimode:

Each new upgrade requires significant data-center downtime, including additional price premiums for structured cabling. And the time between these upgrades is shrinking. 10 Gigabit Ethernet (GbE) is deployed, and 40 GbE systems are being installed now. We'll soon see 100 GbE begin deployment, and a consortium of suppliers announced an MSA for 400 GbE last year. Terabit Ethernet is on the horizon. The traditional economic model of replacing an outdated infrastructure and expecting payoff within a few short years is increasingly under pressure. In fact, at a time of increasing cost pressures, constant multimode cabling upgrades run counter to industry needs.

Distance. With transmission distances up to 4 km, they can accommodate most, if not all, new data-center requirements.

Power. SiPh-based active optical cables (AOCs) use basically the same power consumption as VCSEL-based products: under 1 W for a 10G QSFP+ AOC and 1.5 W at 25 Gbps.

Cost. The cost is roughly the same as VCSEL-based AOCs, but since they are singlemode, they use much less expensive singlemode cable. As speeds increase, VCSEL-based products require ever more expensive types of fiber. After most networks have upgraded to OM3, an upgrade to OM4 can be costly. And what comes after OM4, and how soon will it be needed? With singlemode SiPh AOCs, the fiber remains inexpensive singlemode -- and stays consistent as data rates increase.

Pigtail plug-in options for ease of installation and upgrades. PSM4 AOCs are available in pigtail versions. Here, one end is a traditional QSFP+ active interface and the other either MPOs or LCs. This enables a quick connection to structured cabling (so the AOC side doesn't have to be pulled long distances) and the ability to quickly upgrade as needed with no costly structured cabling upgrade and associated data-center downtime.

SiPh offers a path beyond 25G. VCSELs face increasing challenges as speeds increase. With SiPh-based systems, most modulating schemes have a clear and well-understood technology path to 50G, 100G, and beyond.

Singlemode SiPh bridges the gaps caused by the dual requirements of longer distances and higher data transmission speeds. With a broad base of products both available and being developed by multiple suppliers, PSM4 and SiPh AOCs can be deployed today to enable new data-center architectures, with the assurance that they'll provide a path to cost-effectively meet future upgrade requirements.