Superchannel 2.0: What comes next? 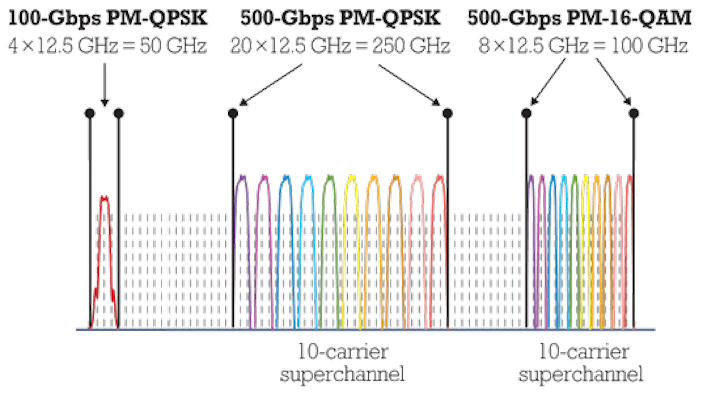 Coherent superchannels have already gone a stage further by implementing multiple coherent wavelengths on a single linecard for operational scalability. These linecards support multiple coherent modulation formats to enable service providers to balance reach and fiber capacity; they even offer an instant bandwidth capability where service providers can use as much of the superchannel linecard capacity as they need. According to a 3Q2013 optical report from Dell'Oro, photonic-IC-based 500G superchannels (the only type of superchannel shipping commercially at the time of this writing) now account for nearly one-fourth of all 100G wavelengths in the world and one-third of those outside of China.

So how does superchannel technology follow that kind of success? The remarkably consistent answer from customers is that they need even more fiber capacity and flexibility. To achieve these objectives, we must look in several development directions.

From fixed to flex grid spacing

One path toward meeting these objectives requires that we break away from the fixed DWDM grid (defined in earlier versions of ITU-T G.694.1) and move to a flexible grid that can be right-sized for a given superchannel spectral width.

Figure 1 shows how this would work. The latest version of G.694.1 defines a flexible grid that's based on building blocks of 12.5 GHz. On the left is a 100-Gbps single carrier signal that uses the most common coherent modulation type, known as polarization-multiplexed quadrature phase-shift keying (PM-QPSK). This modulation format is used in the vast majority of 100G applications because it offers an ideal balance between fiber capacity and optical reach. The resultant signal also fits into a standard fixed 50-GHz frequency slot, where it would be compatible with the installed base of reconfigurable optical add/drop multiplexers (ROADMs) that are based on wavelength-selective-switch (WSS) technology. WSSs deployed to date have been designed to operate on a fixed spacing, and 50 GHz has been the most widely used spacing for these ROADMs installed to date.

The center example in Figure 1 shows a superchannel that's about 250-GHz wide; it would be impossible to switch it through traditional ROADMs that are based on 50-GHz spacing. Instead, a new type of ROADM would have to be developed, "FlexROADM," which could be based on the new tighter grid spacing to enable 12.5-GHz granularity in channel spacing. Twenty of these building blocks are used in this example.

On the right side of Figure 1 is another example of a 500-Gbps superchannel, and notice that this only takes about half of the spectral width of the previous example. That's because it would use a more efficient modulation type called polarization-multiplexed 16-QAM. In this case, the superchannel should only require eight of the 12.5-GHz frequency slots.

The 16-QAM superchannel is good news if absolute fiber capacity is the goal, but that comes at a high price. Whereas PM-QPSK may have an optical reach of 4,000 km or more before regeneration is needed, PM-16-QAM may only be able to support a link of 700 km or less with standard operating margin. So that's twice the capacity but at just about one-sixth the reach.

As I had pointed out in Lightwave two years ago ("Superchannels to the rescue!"), superchannels overcome the problem that the performance improvements in serial electronics aren't able to keep up with the improvements in optical-component scaling by allowing us to go "parallel." Fundamentally, trying to bring a 400G, 500G, or 1-Tbps superchannel into production on a single carrier requires high-speed electronics that aren't in production today and won't be for several years. Hero demos, yes; production, no.

So today's production superchannels implement digital capacity in parallel to solve this problem using photonic ICs -- very similar to the approach that a processor with multiple cores implements. Figure 2 shows how that would work for a terabit superchannel with 1, 2, or 10 carriers, where the load on the electronic components is relieved by adding more carriers to the superchannel.

When the serial electronics for faster superchannel carriers becomes available, the next logical step is to double the capacity of the superchannel so it can produce 1 Tbps of DWDM capacity in a single linecard. Terabit-scale photonic ICs have already been demonstrated, and now the world is waiting for the electronic-component engineers to deliver the right combination of serial processing power, electrical power consumption, and cost per bit. What seems clear is that this 1-Tbps linecard must be implemented in a single card with the lowest possible space, power, and cost per bit.

Let's change gears for a minute and look at the platforms that have to host these DWDM linecards. First, very few of the 100-Gbps long-haul wavelengths deployed today carry a single 100 Gigabit Ethernet service. It's far more likely that they will be carrying 10G or even Gigabit Ethernet services in very large numbers -- well into the future, according to analysts. Therefore, for these massive pools of cost-effective capacity delivered by 100G, 500G, and 1T superchannels, multilayer bandwidth management will be required.

Not only is a ROADM important to optically switch 100G, 500G, or 1T superchannels filled with services that have the same endpoints, but there's a need for a subwavelength grooming function to handle the add/drop, multiplexing, and switching of lower-speed services. Figure 3 shows a highly simplistic example of network efficiency savings by combining DWDM transmission with Optical Transport Network (OTN) switching. Yet even in this trivial example, we see how switching produces equipment savings and more efficient use of backbone wavelengths.

In the upper part of Figure 3, the nodes have no subwavelength switching capability. That means two separate, partially filled muxponder cards are needed at node A. Moreover, two separate, partially filled 100G wavelengths are needed between nodes A, B, and C. In the lower part of Figure 3 the nodes have integrated OTN switching capability, which enables a single, fully filled muxponder at node A and only one fully filled wavelength between nodes A, B, and C. Only at node C is an additional wavelength needed to carry the relevant services to node Y.

In a real network, significant savings are possible by using OTN switching. However, implementing the switching capability in two separate boxes is not ideal -- imagine the explosion of fiber patch cables needed between the DWDM terminal and the crossconnect at each node. Instead, most leading DWDM vendors are implementing a single platform that merges high-capacity DWDM transmission with advanced OTN switching. A survey by Infonetics in 2013 indicates that 86% of service providers plan to deploy OTN switching and, of these service providers, 96% would prefer to implement this type of integrated DWDM/OTN platform by 2016.

The use of an OTN switching platform offers other benefits for superchannels, too. As a digital platform, it enables carrier-grade control planes such as GMPLS to automate the provisioning and restoration functions in the network of services inside the superchannels. And advanced restoration capabilities such as ITU-T Shared Meshed Protection (SMP) will allow dramatic savings in the network capacity needed for service restoration. By implementing SMP in dedicated hardware, it should be possible to achieve the "gold standard" of sub-50-msec protection in an arbitrary meshed topology.

So an integrated OTN platform enables lower data-rate services to be efficiently multiplexed and groomed into high-capacity superchannels and provides new opportunities for efficient service protection. But because of the very high data rates involved today at 500 Gbps and in the future at higher speeds like 1-Tbps superchannels, these switches have to be developed from scratch as a superchannel platform; they can't be "reverse-engineered" onto existing transmission or switching platforms without serious compromises.

Therefore, a key requirement to move to single card 1-Tbps superchannels is a transport system that can support 1 Tbps per slot and provide full access to a large non-blocking OTN switching function. It's incumbent on service providers to really push on this issue as they move to deploy superchannels, so they can ensure they're deploying systems that not only provide cost-effective linecard capacity today, but also deliver high per-slot backplane capacity to provide investment protection in the future.

With integrated digital switching available at many nodes, we've seen carrier-grade control planes such as GMPLS work very well in terms of automated provisioning and troubleshooting. But is there a way to enhance this architecture to encompass optical switching, too?

The next step in ROADM technology is already taking shape. As mentioned earlier, FlexROADMs are designed to operate with the new 12.5-GHz granularity, and the ultimate core switching platform is where colorless, directionless, and contentionless FlexROADM capability is combined with integrated DWDM superchannel linecards and non-blocking OTN switching.

A multilayer switching architecture (see Figure 4) would then enable service providers to construct superchannel express routes across their networks. These superchannel routes could be efficiently filled using OTN switching at the edges but could also be switched optically through the express nodes at the lowest possible cost per bit. A new IETF initiative known as Spectrum Switched Optical Networks (SSON) is aimed at extending the GMPLS framework and associated protocols (e.g., OSPF-TE and RSVP-TE) to operate with flexible spectrum superchannels.

GMPLS may be augmented by carrier software-defined networks in the future, which may have the ability to not only control Layer 0 and 1 at the transport layer, but also control Layer 2 and Layer 3 for a highly optimized overall network. Here, flexible grid superchannels and integrated digital and optical switching would deliver the most cost-effective network possible.

Coherent superchannels are a technology success story for the optical industry, and they will continue to support a large and growing percentage of the world's long-haul optical backbones. The logical approach for implementing superchannels is to use large-scale photonic-IC technology to enhance reliability and reduce power consumption and footprint to achieve dense cost-effective single linecard implementations.

Converged DWDM and digital switching platforms are the carriers' preference, and these systems also provide the ideal foundation for advanced carrier-grade control plane technologies like GMPLS. We will soon see the emergence of the next generation of flexible grid superchannels that will offer even greater fiber capacity and flexibility. And we'll see a new generation of FlexROADMs, which also will be integrated into the converged DWDM/OTN switching system.

GEOFF BENNETT is director of solutions and technology at Infinera.