Systems designers can use the models that standards committees have created to trade off performance and distance. 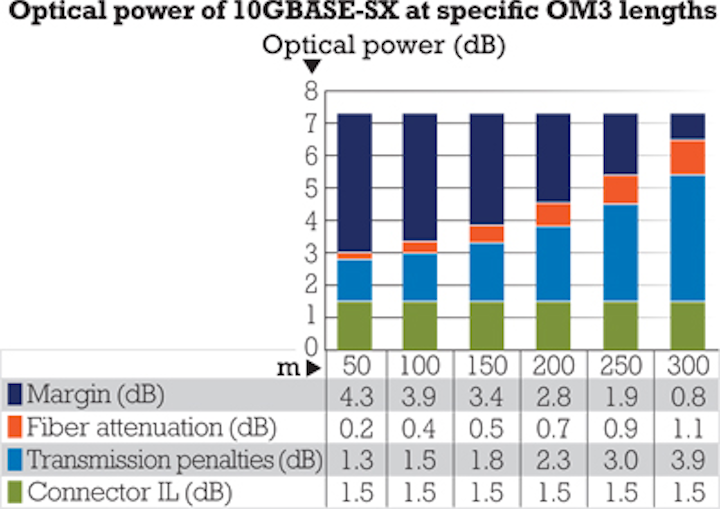 Systems designers can use the models that standards committees have created to trade off performance and distance.

By JENNIFER CLINE and BRIAN RHONEY

Structured cabling deployments often require elements that threaten the channel insertion loss (IL) budgets of a given application. As an example, crossconnects and optical taps can be valuable, even necessary, but result in increased IL.

Standards committees have created models that illustrate the tradeoff between power penalties and supportable distances at a given data rate. Using these models, along with consideration of the performance of the system components, system designers can successfully balance distance and loss in their networks.

What are fiber transmission theoretical models?

The inputs to these models include many key assumptions for the optical transceiver and cabled optical fiber. The cabled optical-fiber inputs include attenuation, dispersion, and bandwidth. Another physical parameter is the connector IL of the channel, since the use of connector patch panels in the link are assumed.

There are many transceiver parameters defined as well - for example, transmitter power, spectral width, and receiver sensitivity. The relevant standards committee defines the minimum values for each of these and other transceiver inputs. Each vendor must then ensure that its components will meet or exceed each of the values to ensure interoperability.

What does the model calculate and how is that interpreted?

A model calculates theoretical penalties based on the inputs provided. These penalties represent the degradation and distortion of the signal as it travels down the optical fiber. Hence, many of the penalties are length-dependent and accumulate as the length of channel increases. Length-dependent penalties include fiber attenuation, intersymbol interference (ISI), mode partition noise, and relative intensity noise.

There are also non-length-dependent penalties such as connector loss and modal noise. Since these penalties are primarily related to the quality and quantity of the connector(s) in the channel, their individual values are held constant in the model. Hence, the total insertion loss associated with these elements only increases as more connections are added in the link.

The calculated power penalties are subtracted from the overall system power budget to determine if an acceptable (positive) margin remains. From the input transceiver parameters, an overall power budget is established. For instance, the power budget for 10GBASE-SR (10 Gigabit Ethernet short reach multimode) is 7.3 dB. At a specified distance, the power penalties can be calculated using the model then subtracted from the overall power budget to determine the unallocated margin of the system. This calculation is repeated with increasing length values until the unallocated margin approaches zero. The length at which the unallocated margin approaches zero would be used as the maximum achievable distance of the system, while maintaining an ISI penalty of <3.6 dB. 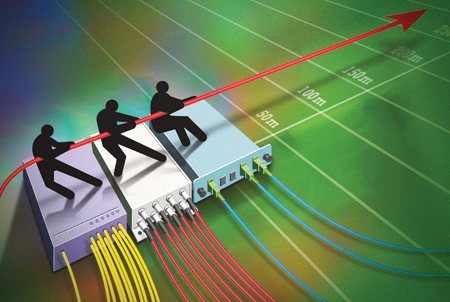 As noted, the overall power budget of an optical system is consumed by attenuation of the fiber, connector IL, and transmission-related penalties. The achievable distance of that link is determined by maintaining positive margin.

The chart in Figure 1 depicts the 10 Gigabit Ethernet (GbE) model output for OM3 multimode fiber. The graph shows the various penalties that accumulate over distance. First is the connector loss, which for the standard is assumed to be 1.5 dB to account for the two connector patch panels, with a maximum loss of 0.75 dB per mated pair. Both the fiber attenuation and transmission penalties increase with distance. At each distance listed in the graph, the remaining power is shown as margin. At 300 m, almost the entire "margin" has evaporated.

How is the model's output published?

The output of a model is typically published in tabular format within the standard. With both connector loss and length as input parameters, it's difficult to show all the possible combinations. Therefore, each standards committee must select how to display the output.

For Ethernet, the IEEE document assumes a system link containing two connector patch panels. The standard multimode maximum connector loss per TIA-568C.3 is 0.75 dB, resulting in an overall connector loss of 1.5 dB for the link. From this assumption, a maximum achievable distance can be calculated by using the model. For example, the IEEE states the maximum reach of OM3 fiber at 10GBASE-SR is 300 m with an overall channel budget of 2.6 dB. This value is a great guidance tool for providing a snapshot for a single system configuration. However, optical links are configured with various lengths of cabling and number of connector panels, splices, and designs. Guidance in these situations requires a closer look into the model.

What is the value of margin?

Having the additional channel loss, or margin, available is significant, since it lets the system engineer include various value-added features in the cabling design.

A traditional point-to-point channel consists of cabling terminated at each end into patch panels (see Figure 3). An example of a value-added feature would be the addition of a crossconnect in the cabling infrastructure. That would result in four connector patch panels in the channel. The crossconnect introduces flexibility into the physical cabling to allow "any port" to "any port" connections.

In environments such as the data center, where Fibre Channel directors and other high-port-count chassis switches are deployed, it can be advantageous to implement port replication via a crossconnect patching field to create a flexible environment. An example of the cabling connectivity when deploying a crossconnect is shown in Figure 4. In this scenario, the system has a maximum connector loss of 2 dB (0.5 dB per cassette/module is assumed). Using the table in Figure 2 for 8G Fibre Channel, the maximum supportable channel distance is 160 m over cabled OM4 fiber.

The use of unallocated margin is not simply for the implementation of crossconnects. This margin can be used to absorb the connector IL associated with other design variables as well, like zone distribution, harness cabling, and extension of point-to-point links. Additionally, the application of unallocated margin can aid the implementation of other technologies within the link, such as optical taps.

The use of optical splitters (taps) for network monitoring is becoming more common. However, taps introduce additional loss by stripping 30% to 50% of the transmission power for analysis. The splitter loss can range from 1.8 to 3.8 dB depending on the split ratio and performance or type of splitter used.

Figure 5 shows a two-patch-panel cabling link connecting two devices. On one end of the channel an optical tap has been introduced in the link to enable monitoring of the network traffic for security and performance. A 50/50 splitter placed in this channel would cause an additional loss of 3.8 dB due to the optical split.

The question is, how can a channel with a specified allocation of 1.5-dB connection and splice loss support 10 GbE transmissions with this additional power penalty of 3.8 dB, plus the loss of the additional LC matings at the tap? The answer is to reduce the system length, freeing some of the unallocated margin, which can then be used for the tap IL.

To take the use of system modeling one step further, the performance characteristics for the optical-fiber cabling and the loss performance of the connectivity to be deployed can be adjusted in the models. The output of the IEEE and INCITS models, available from structured cabling manufacturers, enable system designers to incorporate flexibility and futureproofing into cabling designs without sacrificing the ability to support bandwidth needs over distance.

Use of low loss, high performance components in the structured cabling reduces the impact of the loss experienced from introducing crossconnects (additional connector matings) or technologies such as optical taps. The result is longer distance (reach) for the system. For instance, the standard assumes a maximum loss of 0.75 dB per connector pair; however, the use of low loss components reduces the actual insertion loss incurred in the overall power budget. Taking advantage of this enhanced performance enables that portion of the connector loss power penalty to shift to the "unallocated margin." Because the actual loss is now less, the channel distance can be extended versus what it would be if "standard" performance values were used in the model. Alternatively, this additional margin could be applied to create headroom for additional connector pairs in the channel.

Flexibility in cabling infrastructure design is not something to fear. While standards define maximum distance capabilities and loss budgets, they also provide guidance that enables variation in design, recognizing that the needs and applications across data-center environments can be very different.

Understanding the relationship between insertion loss and distance, a designer can implement a cabling infrastructure that supports current and future needs while allowing flexibility in operations as well as support of new technologies and architectures. The combination of the use of these models along with high performance system components will enhance the capabilities of the infrastructure and provide a backbone to support enterprise and data-center networks as well as SANs for many years to come.