The impact of lightning strikes on aerial fibers was long considered a non-issue, based mainly on the experience of insensitive 10-Gbps transmission. However, with the move to polarization-multiplexed 100-Gbps transmission, aerial transmission cables began to experience recurring, signal-affecting events that could not be explained by the previous channel modeling for coherent transmission. The hunt for an explanation and a solution was on. 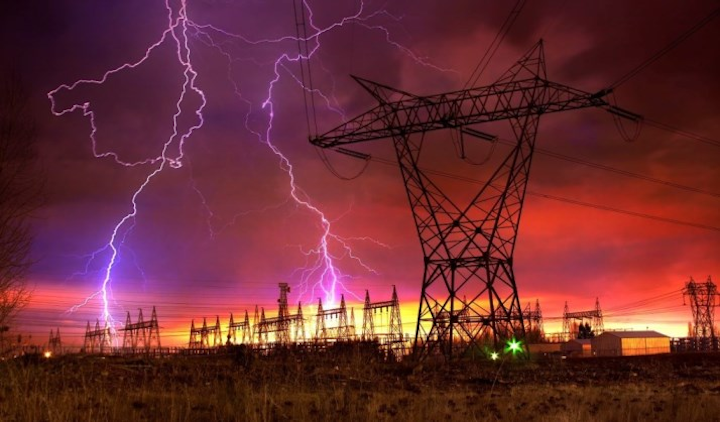 Better well-borrowed than badly invented – this was the original theme of coherent digital signal processors (DSPs) during the rise of 100-Gbps transponders in optical core networks. The polarization multiplexing modulation scheme was a familiar technology that came from microwave communications, and the algorithms used for signal demultiplexing borrowed heavily from wireless textbooks of the 1980s and 1990s. However, the fiber medium and underlying optical components were not without unexpected effects that challenged the robustness of 100-Gbps transmission.

For instance, a problem with a precedent in microwave transmission found its way into coherent optics – i.e., some first-generation narrow-linewidth external cavity lasers (ECLs) proved to be sensitive to vibrations, leading to fast carrier frequency changes after the faceplate of a transponder was hit or a neighboring card inserted.1 Some DSPs could not track the fast change of frequency, leading to severe traffic hits.

Another failed textbook approach happened when a proprietary 100-Gbps training sequence led to power fluctuations of the overall signal envelope. The fluctuations caused greatly increased non-linear cross-phase modulation on all the neighboring channels, and thus a reach reduction. Similarly, some soft-decision forward error correction codes showed an error floor in the presence of 10-Gbps neighbors – something that could not possibly be emulated down to a confidence level of less than one error in a quadrillion bits (1 with 15 zeros) during the design phase.

Designing a communication system at this extremely high confidence level becomes even more demanding when the fiber-optic transmission medium experiences not only rare, but also not well-understood effects. For example, the impact of lightning strikes on aerial fibers was long considered a non-issue, based mainly on the experience of insensitive 10-Gbps transmission. However, with the move to polarization-multiplexed 100-Gbps transmission, aerial transmission cables began to experience recurring, signal-affecting events that could not be explained by the previous channel modeling for coherent transmission. The hunt for an explanation and a solution was on.

Aerial fibers are a very cost-effective alternative to buried cables, as operators can use existing pole infrastructure and avoid digging up earth to lay cables into ducts. When deployed along overhead transmission power lines, the fiber can be part of the optical ground wire (OPGW; see Figure 1)2 or all-dielectric self-supporting (ADSS) cables. The OPGW has a metal coating that is designed to attract lightning strikes to avoid any damage to the power lines, while ADSS cables are built using non-conductive material.

In the age of 10-Gbps, where data transmission resembled the ancient Morse code, the signal integrity in OPGWs was never seriously questioned, although naturally aerial fibers are more strained than buried cables due to the exposure to extreme weather conditions.

With the advent of coherent transmission, the industry began to observe recurring effects on aerial fiber transmission, with not only all DWDM channels on the fiber affected in short bursts, but also both transmission directions affected simultaneously. Dr. Henry Yaffe, a renowned expert on the polarization effects in fibers and president of New Ridge Technologies, says, "I get a fair number of confidential phone calls and e-mails reporting coherent receivers unlocking due to very fast state-of-polarization (SOP) transient events. These transients can be hundreds of thousands of radians per second, even over 1 million radians per second, within tens of microseconds, followed by a slower relaxation in a few milliseconds."3

After analyzing the list of all potential root causes and correlating the traffic affecting events with external data, researchers singled out lightning strikes into or around overhead transmission lines as the most likely cause of this phenomenon (Figure 2).4

Jean-Sébastien Tassé, product line manager at EXFO, a test and measurement company, mentioned: "We are aware of a few cases around the world where lightning strikes are a highly probable cause of increased bit-error rate (BER) in coherent systems. We believe the telecommunications industry should try to better understand the physical phenomena at stake in these lightning-related network failures, develop testing methods to prevent such issues, and introduce coherent systems more robust to lightning."

What are the physics behind these traffic-affecting events? First, mechanical perturbations to the OPGW due to direct lightning strikes can lead to a mechanical and thermal shock on the scale of a few milliseconds. This might affect the fiber in the OPGW and introduce fast changes of polarization-mode dispersion (PMD) within the fiber.4 While 100G DSPs do not have issues dealing with slow-changing PMD distortions, a sudden PMD change might overload legacy DSP designs, putting a lot of strain on the tracking capabilities of adaptive equalizers.

A second and more severe negative impact comes from magnetic fields induced by lightning into and around OPGWs. Because the conductor elements of OPGWs are twisted like a wire cable, the current flows with a spiral component, which induces a magnetic field in the OPGW in the same direction as the optical fibers, causing a Faraday Effect on the propagating light.5 We can attempt a first assessment of this phenomenon based on limited measurements in the laboratory and in the field, as well as taking into account the statistics of current flows during lightning strikes.

According to the available literature data, we derive a first approximate assumption that 50% of all direct lightning strikes into OPGWs could generate angular polarization speeds of more than 400 krad/s. Meanwhile, the top 1% of strongest lightning strikes might generate rotational speeds even higher than 2 Mrad/s. Indirect lightning strikes around aerial cables would have smaller impact, with a first, time-limited, study reported in Reference 6 showing angular speeds up to 100 krad/s.

How does this relate to 100G DSP capabilities and the requirements these were originally designed to meet? Yearlong measurements in buried fiber cables showed angular polarization speeds below 20 krad/s. The most severe impact was recorded in the laboratory for mechanical shocks on dispersion compensation fiber spools (a.k.a. the screwdriver test) with speeds up to 300 krad/s.

Professor Peter Krummrich from the Technical University of Dortmund led the research on polarization changes in the presence of mechanical vibrations before the age of coherent optics. He says, "The speed of polarization rotations due to mechanical vibrations and the impact on transmission has been analyzed in the context of optical PMD compensation several years ago. It was cumbersome to collect the necessary data and it took some time. Analyzing the impact of lightning on systems with coherent detection and DSP feels a little bit like a déjà vu but with much higher speed of the polarization rotations. Again, the investigation is not trivial but necessary to guarantee error-free transmission with new transponder types."

Lightning strikes occur with a strong regional dependence, as shown in Figure 3, with tropical and rain forest regions naturally showing a higher frequency. However, even a lower frequency of traffic-affecting lightning strikes eventually will have an impact on client service quality in core networks, leading to loss-of-frame events affecting guaranteed service-level agreements (SLAs). In Europe, there are on average 30 direct lightning strikes per 100 km of OPGW per year.

To derive requirements for polarization and PMD tracking of coherent receivers, or to simply analyze and record the ultra-fast polarization changes lightning causes, a suitable polarimeter is needed for long-term testing. The industry has seen progress in this area, including the introduction of ultra-fast polarimeters that can capture even the fastest lightning-induced events.

With time, the industry will be able to collect more statistics on the polarization rotation speeds coming from lightning strikes and verify the current assumption of 2 Mrad/s as the top 1% angular speed for direct lightning hits. Meanwhile, optical communications technology vendors are developing DSPs with faster tracking speeds. Systems are now available with DSPs that can track speeds of more than 3 Mrad/s for 100-Gbps transmission.

As with all black swan events, only long-term testing in the field can show whether such an improvement in adaption speed would result in full robustness against lightning strikes. Going from 100G QPSK modulation to 400G using 8QAM, 16QAM, and beyond, signal processing will become even more susceptible to lightning-induced polarization rotations. This poses a serious challenge for DSP designers and needs to be addressed in all of our future networks.