Advanced Modulation for DCI Applications — And the Winner Is?

Driven by the massive traffic growth Internet content providers (ICPs) experience in their networks, data center interconnect (DCI) has become one of the most prominent buzzwords in the optical communications industry. Yet its definition requires further explanation: Connectivity inside the data center (intra-DC interconnects) has to be distinguished from connectivity between data center sites (inter-DC interconnects) as the options for the two application spaces are very different. 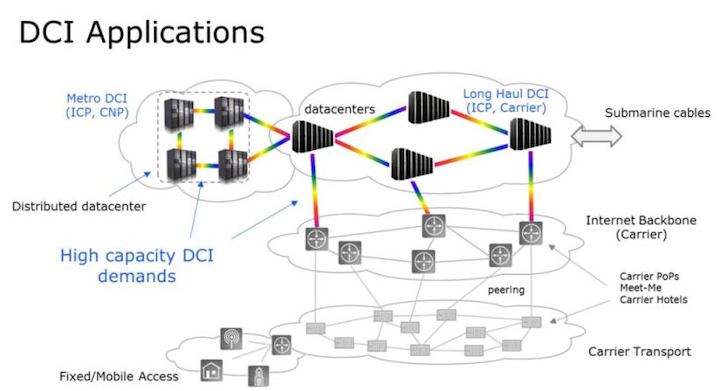 Driven by the massive traffic growth Internet content providers (ICPs) experience in their networks, data center interconnect (DCI) has become one of the most prominent buzzwords in the optical communications industry (Figure 1). Yet its definition requires further explanation: Connectivity inside the data center (intra-DC interconnects) has to be distinguished from connectivity between data center sites (inter-DC interconnects) as the options for the two application spaces are very different.

For intra-DC interconnects, rack space, power consumption, and cost-effectiveness are of primary concern, while fiber exhaust, spectral efficiency and long reach are less so. Pluggable optics in QSFP28 form factor using four parallel fibers (SR4, PM4) or CWDM channels (CWDM4) are the preferred solutions for 100-Gbps data rates and distances up to 2 km. While non-return to zero (NRZ) or on/off-keying (OOK) have long been the modulation format of choice, higher-order modulation (HOM) is now paving the way towards implementations with fewer optical carriers at higher bitrates. This is particularly relevant for higher speed transceivers but can also be an enabler for lower cost transceivers at or below 100 Gbps.

The IEEE P802.3bs Task Force has recently selected 4-level pulse amplitude modulation (PAM4) for 400 Gigabit Ethernet (GbE) transmission over single-mode fiber (SMF), extending the PAM4 ecosystem being formed around electrical interfaces such as the 400-Gbps attachment unit interface (CDAUI-8) and the OIF CEI-56G-PAM4 interfaces into the optical domain. Three optical interface classes have been defined: 4x50-GBaud parallel fiber transmission over 500 m (400GBASE-DR4) as well as 8x25-GBaud WDM transmission with 800-GHz carrier spacing over 2 km (400GBASE-FR8) and 10 km (400GBASE-LR8), all in the 1.3-μm wavelength region. A 4x50-GBaud WDM transmission has been discarded for the first version of the 802.3bs standard, but is considered a future option once the component technology matures.

PAM4 is advantageous for transmission over band-limited channels and facilitates the use of lower bandwidth components. It incurs a 5-dB sensitivity penalty over NRZ transmission at the same symbol rate, though, requiring forward error correction and higher launch powers to achieve the necessary link budget of the target applications. Multiple demonstrations at this year's OFC have shown feasibility of the described approaches and commercial pluggable optics products can be expected shortly.

For inter-DC interconnects, transport of individual 100-Gbps or 400-Gbps channels over a single fiber pair becomes increasingly uneconomic with distance, and optically amplified DWDM systems are typically required. Different application classes can be identified. Connectivity over metro and regional core networks uses very similar approaches as in communication service provider (CSP) networks. The national or international scale has traditionally been the domain of high-capacity leased lines, but an increasing number of ICPs are also looking at building some of these connections on their own. Connectivity is established between the top-level IP routers, so latency is not so critical but cost-effective capacity of course is.

A coherent optical layer with ROADMs and 100-Gbps DP-QPSK modulation at 25 GBaud is common practice in this area to provide high fiber capacity and adequate performance. An additional choice of DP-16QAM and DP-8QAM modulation allows 200 Gbps and 150 Gbps per optical carrier to be transported over roughly a quarter and a half of the DP-QPSK distance, respectively, thereby lowering the network cost and increasing the overall network capacity by about 30%. Next-generation coherent approaches aim to double the symbol rate to further reduce the cost per bit, rack space, and energy consumption in the future.

Another very important inter-DC interconnection class is point-to-point links with typical lengths up to 80 km. In classical enterprise networks they are used to connect twin data centers for business continuity and disaster recovery purposes. Low latency is a critical parameter to allow synchronous mirroring between sites.

Such links are also of huge importance in ICP networks. Due to the sheer size of web-scale data centers, compute and storage functions need to be distributed over geographically dispersed colocation zones for capacity and availability reasons. Because of massive cross-sectional fabric bandwidths, multi-Tbps DWDM links are necessary to establish inter-site fabric interconnects. While coherent DWDM optics could in principle be used for this purpose, the performance and spectral efficiency of today's coherent solutions are not required for the application and their cost and power consumption can be prohibitive.

Consequently, there is a growing interest in leveraging the IEEE 802.3bs ecosystem along with 25-GBaud DWDM transmitters for a cost- and power-efficient direct-detect alternative. Operating in the 1.55-μm transmission window, optical booster and pre-amplifiers can be used to reach the required link budget. The chromatic dispersion can be dealt with through a combination of electronic equalization and bulk optical dispersion compensation. As the cost of the amplifiers and any optical dispersion compensation is shared across all DWDM channels, it is negligible when compared to the aggregate cost of the optical transceivers.

Direct-detect 100-Gbps optics for inter-data center interconnects (100G metro) have been available since 2011 in 4x25-Gbps configurations. By increasing the bit rate per optical carrier to 50 Gbps, higher-order modulation now offers the possibility to achieve 100-Gbps and 400-Gbps direct-detect solutions at even lower cost and power. Different modulation formats have been considered for this purpose. PAM4 and discrete multi-tone modulation (DMT) have attracted most attention (Figure 2).

We at ADVA have investigated both approaches over the last few years and found that they can deliver comparable performance. PAM4 can better cope with non-linearity in the transmitter and receiver chain. DMT, especially when combined with vestigial sideband (VSB) modulation, can alleviate the need for optical dispersion compensation.

The joint optimization of optics and electronics is critical for achieving adequate performance with either method. As such, the choice of the optical and RF electronics are one of the most important discriminating factors for the selection of the modulation format. The extension of direct-detect capabilities from 50 Gbps to 100 Gbps per carrier will rely on components with sufficiently large bandwidth. What is more, practical deployments require a sufficiently large receiver dispersion window. Without additional means, the dispersion window will shrink by a factor of 4 when doubling the bit rate.

So when it comes to advanced modulation for DCI applications, who is the winner? As always, this depends on the application. Inside the data center, PAM4 will make its inroads and gradually replace OOK on single-mode fiber links. Metro core, regional, and even larger networks will be dominated by coherent optics. Point-to-point DWDM DCI links are an attractive playing field for higher-order direct detect — and this will continue to be the case as long as such approaches can leverage their cost and power consumption advantage over their coherent counterparts.