Passive optical LAN (POL) technology platforms optimized for enterprise LAN environments have become available only in the last couple of years from such companies as Tellabs and Motorola (recently acquired by Google). Yet, this technology – which enables a singlemode fiber-to-the-desktop architecture for the LAN – is quickly gaining traction in the market. 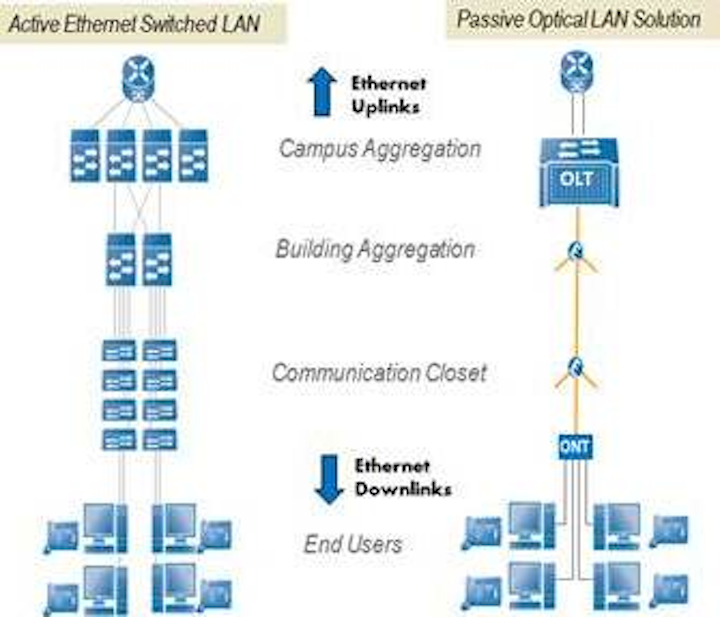 Passive optical LAN (POL) technology platforms optimized for enterprise LAN environments have become available only in the last couple of years from such companies as Tellabs and Motorola (recently acquired by Google). Yet, this technology – which enables a singlemode fiber-to-the-desktop architecture for the LAN – is quickly gaining traction in the market.

POLs are finding their place deeper within the LAN to meet the needs of very large and demanding Layer 2 switched applications. And it’s easy to see why1:

Decision makers are increasingly choosing to forgo the status quo and take advantage of what POLs have to offer for the long-term benefit of their organizations.

Mature and reliable technology
POL network equipment is compliant to the ITU-T G.984 Gigabit Passive Optical Network (GPON) technology standard. PON technology was developed for and deployed in the U.S. by Verizon (for FiOS triple-play services) and by many other telecom operators around the world. The FTTH Council Europe estimates that PON architectures currently make up 20% of FTTP/H access networks around the world, and that number is growing.2 And in the U.S., over 64% of broadband FTTH deployments use PON technologies, 51% of which is GPON.3

A typical large Layer 2 switched Ethernet campus network (as depicted on the left side of Figure 1) requires multiple levels of aggregation at the campus distributor, building distributor, and floor distributor/communications closet. Multiple layers of switches are required to aggregate the traffic back to the core-routed network. The layers are also required because the various cabling media choices used with traditional active Ethernet networks are limited in performance over a specified distance due to signal attenuation and other performance parameters (as per IEEE and TIA standards specifications). Cat 6A copper cabling for the horizontal links, for example, is specified to support 1 or 10 Gigabit Ethernet up to a 100-m limit (328 ft), while multimode dual fiber connections for the backbone links can support 10 Gigabit Ethernet up to 2 km.

In contrast, a POL network (depicted in on the right) does not require any active components on any floor or even in each building. This is because singlemode fiber communications media can support very high transmission speeds (in the terabits) over much longer distances – up to 20-30 km (over 12 miles) per industry standards specifications. Only a simple passive (non-powered) optical splitter is needed to distribute and branch the communications signals to the optical network terminals (ONTs) located in or near the work areas. The ONTs (also known as the workgroup terminals) come with various port configurations to support all services required, such as VoIP or POTS, IP/Ethernet data, analog or switched digital video, etc. For example, an ONT (shown in Figure 2) has four service ports of 10/100/1000 Base-T with IEEE 802.3at compliant Power over Ethernet (PoE) supported. Local AC power with optional battery and UPS can also be provided.

Instead of installing the typical two to four home-run copper cables from the communications closet to every work area, now only one lightweight, small-diameter single-fiber cable can be installed to the ONT, enabling considerable savings in infrastructure materials and installation labor.

High-bandwidth connectivity and considerations for POL
With regard to bandwidth management, the POL system offers a unique, efficient, and optimized way to provide guaranteed bandwidth for various services while allowing up to 1-Gbps Ethernet connectivity and burst rate for many users. The POL system northbound connections to the core-routed network are provided as multiple 1-Gbps or 10-Gbps Ethernet aggregated links up to 40 Gbps, while the service ports for the endpoint devices are typically standard 10/100/1000 Base-T Ethernet interfaces connecting to devices via regular RJ-45 copper patch cords (no PC fiber NIC cards required).

Due to the inherently variable patterns required for different communications traffic as well as the specific bandwidth requirements based upon service types, Ethernet connections may at times require only low-bandwidth transmission, while at other times may require much more. The POL system enables network managers to specify and ensure a guaranteed bandwidth by the system via the committed information rate (CIR) setting to assure quality communications for real-time services. At the same time, the POL platform allows specified flows to burst up to the peak information rate (PIR) setting, which optimizes the dynamic distribution of bandwidth for each PON port (2.4 Gbps down/1.2 Gbps up) between many users, typically up to 32 or 64. The optical line terminal (OLT) aggregation switch provides for non-blocking wire throughput of all the traffic across the LAN. The aggregated uplink connections to the core-routed network from the OLT are then chosen and sized to accommodate the guaranteed overall CIR for the system.

Stringent security required for the government
POL technology uses the highly secure Advanced Encryption Standard (AES) 128-bit protocol as well as other advanced identification and authentication features. The POL platforms from some vendors have already passed the extensive information assurance test requirements of the U.S. Department of Defense Joint Interoperability Test Command (JITC). These tests evaluate security features of the network equipment and assess their ability to support critical and highly secure military and government agency networks. Focused government entities were, in fact, the initial requesters of the POL technology and were early adopters of it, beginning in 2009.

Meeting TIA standards
POL is now supported by the Telecommunications Industry Association (TIA) 568-C.0 Generic Cabling Standards. On August 14, 2012, the TIA cabling standards organization approved and published Addendum 2 to the TIA-568-C.0 Generic Telecommunications Cabling for Customer Premise standard. In this officially approved update to the cabling standards document, the GPON approach has been added and categorized as a supported singlemode fiber application for the LAN. The standard’s channel definition now includes support for passive optical splitters, which are a key component of the architecture. The Addendum 2 update calls for an optical attenuation budget for the GPON Channel infrastructure of 13 to 28 dB, corresponding to the ITU-T G.984 GPON standard compliance requirements relative to the Class B+ optical transmission characteristics.

In addition, according to the ANSI/TIA 568-C cabling standards, copper cabling requires measured verification of no less than seven technology parameters for confirmation of the installed copper infrastructure performance characteristics. Testing is required for installed copper home-run cables to each and every Ethernet device. On the other hand, POL infrastructure deployment requires only half to one-quarter the amount of horizontal runs and only one measured test parameter (optical attenuation). Therefore, it will be far easier and take far less time to install and test than traditional balanced 100-Ohm copper structured cabling.

Who can benefit from POL?
POL is best suited for larger LAN deployments, where the scalable and immediate cost savings and longer-term operational benefits compound most greatly. Verticals that could most benefit from POL include:

Disruptively low total cost of ownership
Until recently, the high cost of a future-proof, fiber-to-the-desktop LAN architecture kept it out of reach for many organizations. However, today, capital expense related to POL equipment and infrastructure can be 40% less than the traditional active switched Ethernet approach.4

In addition, deploying a POL system can result in 50% to 70% savings in system operational expenses compared to a copper system due to less energy consumption, reduced HVAC and UPS cooling requirements, and lower monitoring and maintenance costs.4 This disruptively low total cost of ownership savings along with the many other benefits of the future-proof fiber infrastructure accounts for why POL is gaining traction in the market.