New coherent transmission modulation formats, with their advanced coding and forward error correction (FEC), are bringing networks closer to the Shannon limit, defined as the maximum achievable capacity. Skirting this limit to extract the maximum utilization for real networks with complex topologies and traffic requirements requires additional consideration of network planning and management. 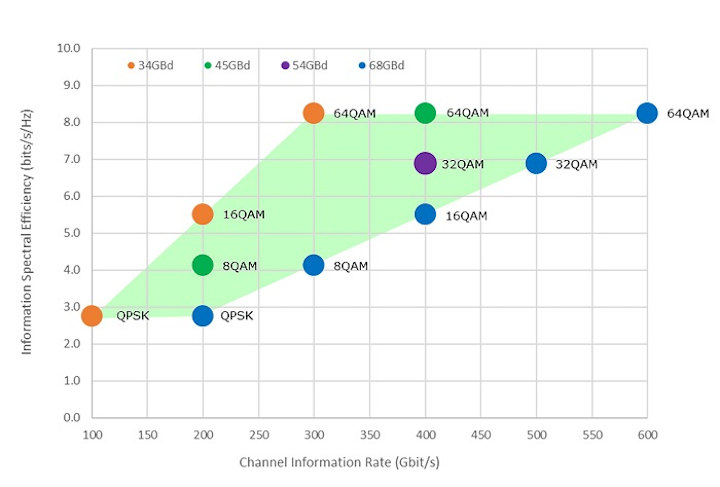 Operators have rapidly adopted coherent transmission since the first deployments of DSP-based coherent technologies to long-haul and submarine networks in the early part of this decade. Coherent technology is now being extended throughout the metro and soon will be deployed in access networks to meet the inexorable demand for bandwidth. Where 10-Gbps wavelengths were deployed in 50-GHz grid WDM systems, 100-Gbps wavelengths implemented with around 32-Gbaud symbol rates have been deployed on the same multiplexers and amplifiers with greater reach and enhanced impairment tolerance, thereby simplifying capacity migration. More recently, second-generation flex-coherent modulation enabling 200-Gbps wavelengths with 16QAM or 8QAM modulation, and now the first 400-Gbps wavelength deployments at higher baud rates, are being deployed.

Investments in DSP technologies with ever higher CMOS integration will shortly enable a new generation of up to 600-Gbps wavelengths with highly configurable baud rates and modulation up to 64QAM with a large degree of modulation control. Beyond this we can expect to see 800-Gbps or even 1.2-Tbps wavelengths in the future, with higher baud rates to enable 400-Gbps quantization of the wavelength capacity.

The new modulation formats, with their advanced coding and forward error correction (FEC), are bringing networks closer to the Shannon limit, defined as the maximum achievable capacity. Skirting this limit to extract the maximum utilization for real networks with complex topologies and traffic requirements requires additional consideration of network planning and management.

Such modulation flexibility is new to optical network design. For many years fixed parameters, including bit rate and channel spacing, simplified network planning, but also led to unused margin and thus capacity on the network. Providing highly flexible coherent modulation with wavelength-based optimization for multi-point networks is the key to extracting the maximum capacity at the lowest dollar per bit. Naturally, this goal is now the focus of a number of optical network operators.

We can consider the fundamental parameters at the channel level to be the baud rate (or symbol rate), the equivalent QAM that affects spectral efficiency (SE), and the information coding with FEC. At the network level, metrics of fiber capacity and bandwidth quantization (number of managed channel entities) are relevant, which then determine overall cost per bit for incremental service additions and for the aggregate network.

While it is tempting to think maximum SE is always desired, if this comes at the expense of optical reach with additional regeneration requirements, network costs may increase. Both reach and SE are thus parameters to be jointly optimized for specific network objectives. Firstly then, it is important to understand the flexibility of the new generation of coherent DSP and optical interfaces.

How much control of SE and baud rates per channel is available and which combinations best suit specific network objectives? Varying approaches to modulation exist between vendors. Figure 1 is an example representation of the latest flex-coherent DSP capabilities showing SE versus channel information rate supporting up to 600 Gbps per wavelength. For simplicity, the figure shows a 100-Gbps granularity modulation combination; intermediate points at sub-100-Gbps granularity in the shaded area will also be possible, with various formats in different DSP implementations providing high flexibility. 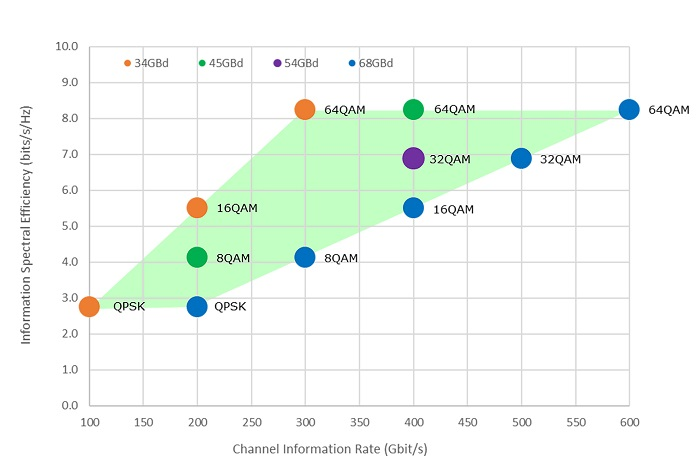 What we see in the figure is a range of combinations of baud rate and QAM order leading to different channel capacities. So, which combinations should you choose? Well, that depends on your network objectives. Typically, a given application will only use a small subset of the options available. Short, high-capacity networks will favor high QAM. Highest baud rates will be favored except in cases where granularity is too coarse for specific network traffic patterns.

Not shown in the chart but also highly relevant is the reach characteristics for different modulation configurations. To first order, this is determined by the modulation format or equivalent QAM. For example, 16QAM signals will have comparable reach independent of the baud rate when limited by typical transmission impairments. What changes is the channel capacity and thus cost per bit and overall spectrum use, which then determines quantization of bandwidth on the fiber. Network planning and optimization tools can assist operators in determining the optimum configurations.

Let us look at the requirements of a few network operator types to explore how they may use this new generation of flex-coherent technology and how it may be implemented in typical network deployments.

When discussing very high-capacity modulation, one of the first applications that comes to mind is hyperscale metro data center interconnect (DCI), which requires very high capacity over relatively short distances. This is a natural application for the highest QAM constellations – packing the largest number of bits into a symbol as possible for lowest cost. This approach may come at the expense of coarse bandwidth quantization, but deployments are generally in terabit-per-second bandwidth chunks or greater.

Today’s networks are deployed with 100-Gbps or 200-Gbps coherent interfaces or 100-Gbps PAM4, and in the near future with 400-Gbps to 600-Gbps wavelengths. In the medium term 400-Gbps wavelengths with 16QAM modulation provided by 400G ZR coherent pluggables for use directly on packet switches will be favored by some; although others no doubt will seek maximum SE with 64QAM for highest fiber capacity. Still, for the metro DCI application, a high degree of flexibility is not required; rather, the goal is lowest dollar per bit with a sufficient level of SE to meet the optimal capacity per fiber according to the available fiber plant.

Carrier networks, on the other hand, are typically multi-point ring or mesh topologies that in general support a mix of circuit types with a range of paths, including pass-through at multiple intermediate ROADM locations. This can be metro, regional, or long haul in scale. OTN provides effective sub-wavelength aggregation for individual connectivity services in the 10-Gbps to 100-Gbps range in the near term. Packet aggregation from core switches is also used for MPLS backbone transport.

Bandwidth quantization becomes more of an issue here, as 400-Gbps and 600-Gbps waves may be too coarse for individual path connectivity; 200-Gbps or 100-Gbps channels may be preferred with higher connectivity. We may thus expect to see a range of modulation types with combinations of baud rate and QAM for optimization of reach and to enable a larger number of end-to-end circuits on the network. Backbone DCI will show less dependency on quantization and service types, but still will require path optimization through multiple ROADM nodes and to avoid regeneration – so it will share some of the same optimization criteria as carrier networks.

Primary modulation optimization metrics are baud rate, modulation format (QAM), and channel spacing or channel passband. Secondly we may consider coding and FEC overheads. Figure 2 is a schematic representation of the three primary modulation adjustment “knobs” that will be used for network optimization. We see that baud rate and equivalent QAM specify the channel rate, which directly correlates with cost per bit at the incremental channel level. Equivalent QAM and channel spacing or passband specifies the overall fiber capacity, which determines aggregate cost per bit. Baud rate and channel spacing/passband specify bandwidth quantization or the number of distinct routable channels available for connectivity.

Referring to the applications above, metro DCI will be optimized with maximum fiber and channel capacity. This implies the use of the highest QAM and baud rate, with the resultant passband typically 75 GHz for ~66-Gbaud channels. Carrier and other longer-reach multi-point applications with varying quantization requirements are optimized with combinations of baud rates and QAM. Flexible passbands on intermediate ROADMs tailored to the baud rates and also accommodating bandpass narrowing through multiple ROADM cascading will enable multiple channel rates. Aggregating multiple wavelengths into densely packed superchannels is another option to limit the impact of bandpass narrowing. Use of superchannels may further improve SE, although again at the expense of granularity and bandwidth quantization.

In practice we might expect a stepwise approach to spectrum management in more complex networks. It is easy to see that optimizing individual passbands in a multi-baud-rate network gives the most control over bandwidth quantization and spectral narrowing. However, lack of coordination across a multi-point network can result in spectrum fragmentation and blocking. To avoid these headaches and simplify spectrum management, a network operator may initially choose a small number of passbands to manage, such as 50 GHz, 75 GHz, and 100 GHz. With evolved planning and control methods the operator may choose to extend to more passband options to optimize quantization and ROADM passband narrowing on a per-path basis to use spectrum to the fullest extent. 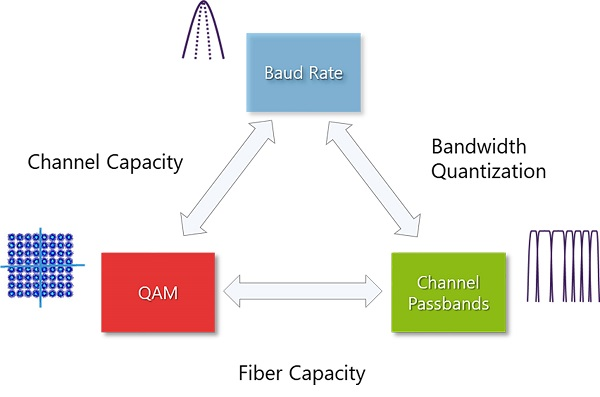 SNR defined in unitary bandwidth on the receiver therefore provides an additional performance metric useful for characterization of networks with multiple baud rates. As to first order, it shows achieving a specific SNR will enable similar reach independent of the baud rate for a given modulation format or QAM. Although it may sound counterintuitive to maintain the same reach when we double the channel capacity, it is similar to two channels being supported over the same distance with double the spectrum usage.

The following is the simple conversion to SNR on the receiver from a given OSNR, which is still the metric for optical link amplifier noise characterization:

Where the constant is derived from 0.1-nm bandwidth used for OSNR, BR = signal Gbaud per second, and the RxdB is an electrical receiver impairment.

The SNR increases with OSNR, as expected, but decreases with baud rate. However, increasing the channel power in proportion to the baud rate (constant PSD) enables OSNR to increase approximately in proportion and maintains the same SNR and reach.

We have seen above how multiple controls now available on flex-grid ROADMs and coherent interfaces enable a much higher degree of optimization capability for networks than was available in the past. What this advance means in practice is that operators can maximize spectrum resources for lowest cost per bit and maximum scalability on the network.

Operators can do this with consideration of the bandwidth quantization needs of their network. This is easy to see for static optimization, but the prospect of elastic networks with dynamic optimization looks even more tantalizing. Static optimization trades excess start-of-life margin for capacity and lower cost per bit. Dynamic optimization could enable compensation for impairments that would otherwise be assigned aging margin on the network, including fiber repairs, component aging, etc. Such compensation could be applied either with user intervention or via automated network processes – hence using SNR as the primary resource to maximize bandwidth utilization and lower network costs. For DSP-based adjustments, such dynamic control would typically affect service and would generally require reconfiguration of user services. Still, as control methods evolve we may expect to see such techniques used in the future.

Dr. Paul Morkel issenior director of product management at ADVA Optical Networking. He has more than 30 years of experience in optical transport and is responsible for optical product planning and management within ADVA.