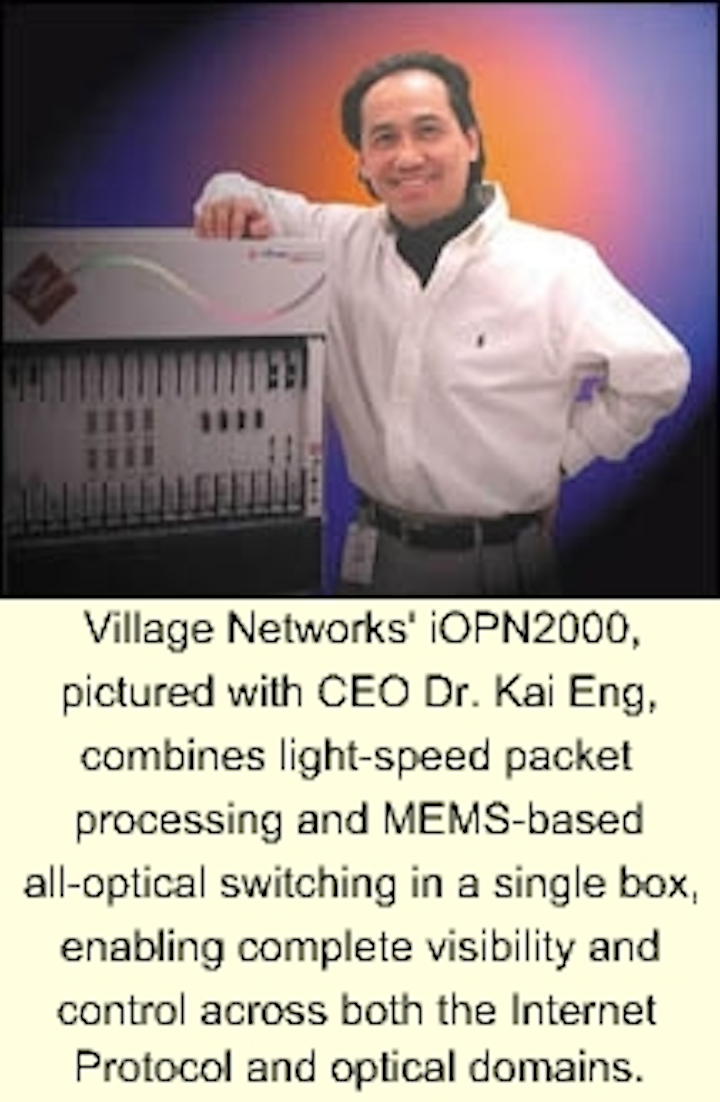 The concept itself is not new or revolutionary: Simplify the network by creating a seamless integration and communication between the Internet Protocol (IP) layer and the optical layer. What is new, however, is a product designed to meet this goal by combining packet processing and all-optical switching into a single box. 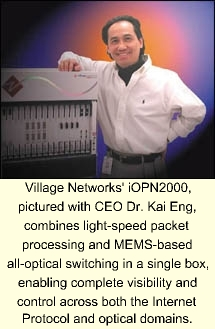 The iOPN2000 (pronounced "eye-open 2000") delivers what Eng calls unbreakable optical IP flows, which are essentially IP conversations. "When you click on your PC," he explains, "you initiate conversation to somewhere else, and that conversation is merged with millions of other conversations in the optical network. If there's an optical fiber cut, your conversation is lost along with everybody else's." The iOPN2000 enables carriers to identify, isolate, and control each individual conversation-up to 64,000 in a single chip or anywhere from a half a million to eight million per system-which allows them to offer different shades of services, including nearly instantaneous restoration of high-priority traffic. A unique attribute of this control mechanism is that it enables packets from a single data stream to be mapped across multiple wavelengths to support quality of service (QoS) and service-level agreements.

The second major benefit is packet or data beaming, an idea that came to Eng while he was watching a late-night rerun of Star Trek. "In Star Trek, they beam people from starship to starship," he explains. "In our case, the packets are actually beamed directly into the optical network." The iOPN2000 eliminates the need to two-layer multiplex packets into a fixed-size channel and then onto the optical network; instead, packets are mapped directly into the optical domain, which allows carriers to create bandwidth anytime, anywhere, according to customer demand.

Finally, Village Networks promises its solution will radically simplify the network. Today's carriers and service providers must manage four layers-IP, ATM, SONET/ SDH, and optical-and each layer has its own management system, its own complexity, its own challenges. The iOPN2000, "takes the bull by the horns and takes care of all the layers all in one shot," explains Eng. "Conceptually, we have collapsed all those layers into a single layer from a management viewpoint. Customers can solve the problem end-to-end in a complete way."

The iOPN2000 contains two engines: the packet engine and the optical engine. The packet engine consolidates the functions of an IP router, a digital crossconnect, a SONET/SDH add/drop multiplexer, a DWDM multiplexer, and an optical crossconnect in one platform. It supports standard interfaces, including OC-3 to OC-192, packet over SONET, SONET/SDH, ATM, and Gigabit Ethernet. Its functions include per-flow identification and queuing and light-speed packet forwarding or routing at 2.5 to 10 Gbits/sec-scalable to 40 Gbits/sec-in a single customized ASIC.

Both engines are integrated and controlled by a proprietary operating system, which supports all the standard IP routing protocols: open shortest path first, RIP, BGP4, IS-IS, and Multiprotocol Label Switching (MPLS). The VISION IMS, or Integrated Management System, can control not just one iOPN2000, but a network of the devices.

Central to the VISION IMS is "one-click" provisioning. Explains Eng, "You can walk up to the software GUI and open up the interface and see the entire view of the network and individual elements. You can click on them and they provide the details. You can then provision any connection with the appropriate QoS, MPLS, or other parameters, all in one shot." The VISION IMS also enables multilevel flow restoration via a proprietary algorithm Village Networks calls Layer 3 FastForward Rerouting, which enables carriers to choose how to restore their networks.

The industry as a whole has already recognized the potential benefits of an IP and optical integration. "I think that's the whole reason why ODSI [Optical Domain Service Interconnect] got started," says Christine Heckart, president of TeleChoice Inc. (Tulsa, OK).

Eng and the folks at Village Networks have decided not to wait for the industry's official green light, however, choosing instead to "leapfrog the standards activities, " explains Eng, to offer customers the benefits of seamless integration as soon as possible.

While Heckart believes that carriers looking for real-time provisioning, management, and quality capabilities at both the IP and optics level will certainly consider the iOPN2000, she cautions that it may be some time before the product is wholeheartedly embraced. "There are some service providers who have a religious bent toward keeping sublayers like optics and routing separate," she says.

Village Networks' success, then, is contingent on its ability to convince carriers and service providers that it has a viable product to offer-which may not prove to be much of a challenge. Global Crossing (Hamilton, Bermuda) is already sufficiently convinced to beta test the iOPN2000 platform. Additional U.S. and international carriers are also testing the product, which is scheduled for commercial availability within the next six months.