Softswitching is the architecture for the new public network 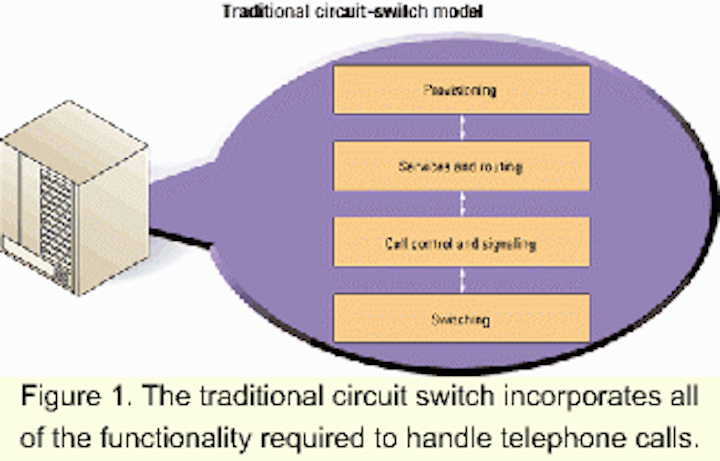 Network architectures based on packet voice infrastructures may transform the way we make a telephone call.

Circuit switching, the dominant technology of the public-switched telephone network (PSTN) for the first 100 years of its existence, was not designed to handle today's vast amounts of heterogeneous traffic traversing the public network. To accommodate the exponential growth in data traffic-driven by the Internet-carriers have built out sizable packet backbones, often based on the latest fiber-optic technologies.

Maintaining these two distinct, separate networks has proven extremely costly and complex for carriers, and it is now recognized that packet (not circuit) switching is the technology of choice for building data and voice networks. The transition to the new public network, a converged network that will carry both voice and data traffic, has significant ramifications on how carriers are building network infrastructures.

Over the past few years, it has become apparent that packet telephony will enable the convergence of the voice and data worlds, ultimately allowing service providers to enhance their competitive position. In just this short period of time, the industry has seen an evolution in the architectures and solutions that are the underpinnings of the packet-telephony model, moving from early "science experiments" to solutions that are truly carrier-class and can be deployed in the world's largest service-provider networks.

Early on, basic connectivity was provided via Sun or Microsoft Windows NT servers outfitted with Dialogic or Natural Microsystems voice-over-IP (VoIP) cards. These solutions served to advance the market, while delivering "proof of concept" that packet telephony would actually work. However, it was quickly seen that these first solutions were not the types of products that carriers would use to build out the new public network. These solutions lacked the carrier-class capabilities that service providers were looking for, including 99.999%, or five-nines, reliability and the highest levels of scalability. Moreover, from a financial perspective, that was not a cost-effective platform.

The second type of solution that emerged was based on traditional remote-access platforms. Remote-access vendors added VoIP capability into their existing remote-access-service (RAS) platforms, which was considered a logical extension, since the RAS box was already handling Internet calls. However, these platforms were designed with modem traffic applications in mind and as such could not meet the scalability requirements of service providers-these products typically top out at a few hundred ports. The RAS devices generally did not support signaling systems, since these products were not designed for VoIP applications from inception and could not leverage the signaling and control provided under the PSTN. The RAS platform with VoIP may have been suitable for small Internet service providers (ISPs) but was not robust enough to address carrier-class requirements, particularly when an entirely new voice network was being deployed. 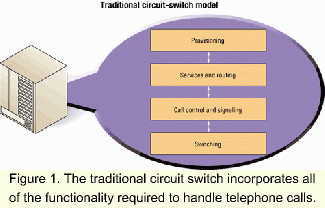 Figure 1. The traditional circuit switch incorporates all of the functionality required to handle telephone calls.

Over the past two years, the telecommunications industry has evolved to a new architectural model that bridges the gap between the voice and data worlds-the softswitch model. Traditionally, circuit switches have included all of the functions necessary to handle calls-switching, call control and signaling, services and routing, and provisioning (see Figure 1).

In the softswitch model, the proprietary circuit switch is "disaggregated" into separate components, which provide all the functionality of the traditional voice network but offer carriers improved economics and increased revenue opportunities. The softswitch model consists of the following components (see Figure 2):

Early response to this new architecture has been extremely positive, and over time, the industry will see all carriers moving to this model. Certainly, all service providers are planning for packet voice, and many are either testing these solutions in trials, or have actually selected platforms and begun deployment of packet voice infrastructures. 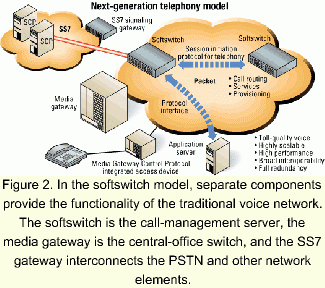 Figure 2. In the softswitch model, separate components provide the functionality of the traditional voice network. The softswitch is the call-management server, the media gateway is the central-office switch, and the SS7 gateway interconnects the PSTN and other network elements.

Leading next-generation carriers such as Global Crossing, Williams Communications, and XO Communications are deploying next-generation packet-telephony solutions throughout their fiber-optic network backbones. Global Crossing, for instance, is building a worldwide packet voice network that will integrate all of the carrier's voice traffic by the end of 2002. Williams will leverage its 33,000-mile, 125-city fiber-optic infrastructure to deliver an array of VoIP services such as 1+ dialing, 800 services, and calling-card services, as well as an array of enhanced services. XO Communications plans to use the softswitch architecture to support traditional and enhanced local and long-distance services.

Why has the softswitch architecture met with success, while previous packet-telephony solutions were not accepted into carrier environments? A major factor is that the solutions forming the softswitch model have been designed to meet the stringent requirements of service providers:

Today's softswitch model of services provides carriers the ability to protect their legacy equipment investment and reap significant cost benefits. However, these cost savings are only the first steps. The savings allow a service provider to stay ahead of the ever-declining price for basic voice but do not improve its competitive position. To take a leadership position, a carrier must offer premium services that businesses and consumers are willing to pay for to bring the right mix of services to market as quickly as possible. The softswitch architecture makes carriers more competitive in two ways. First, it can facilitate applications that are difficult or impossible to deploy when voice and data ride separate networks. Second, it can actually enhance time-to-market for new applications.

Carriers will need to continue to offer the services that customers have already grown accustomed to having in the voice network: voicemail, call-forwarding, caller ID, etc. But the explosive growth of the Internet also demands services that integrate voice and the Web. Examples of such services include unified communications, Internet "click-to-talk," and enhanced voicemail. In the past, these types of enhanced services have been slow to develop, partly because of the separate voice and data networks. It is a widely held belief that network convergence will eliminate the barriers and yield a flood of innovative new services, many of which have not yet been conceived.

The softswitch model of services also speeds the application development cycle. Developing applications for the PSTN has traditionally been a slow and costly process. Services are implemented either in the circuit switches or in separate processors called service control points (SCPs). In the past, carriers have been dependent on switch vendors for enhancements, with changes taking up to several years and costing millions or tens of millions of dollars. And when the carrier received the new service, it would receive it in a general product release along with all of its competitors, losing any advantage the new service may have offered.

In contrast, in the softswitch model, Internet applications are developed very rapidly on inexpensive, standard hardware platforms using commercially available tools. By enabling the implementation of voice applications on standard IP-based servers, the softswitch allows carriers and third-party developers to take advantage of a simple and open development environment. That enables carriers to build new, highly differentiated services in weeks, rather than months or years.

The softswitch model allows carriers to employ "best-of-class" services from many sources. Examples of possible service options include the following applications:

Just over two years ago, the term "softswitch" hadn't yet been coined. Now, this new architecture stands to transform the way the world makes a phone call. The combination of next-generation packet-telephony solutions and new Internet-style applications will have a profound impact on the telecommunications industry. Not only will it improve service providers' competitive positions, it will offer users access to applications that will enhance their business and personal lives.