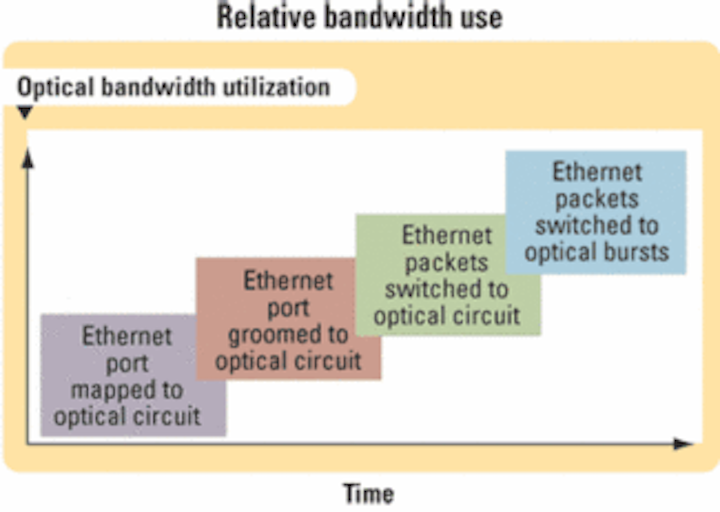 Investment in optical network systems is shifting from SONET/SDH to Ethernet over WDM. Ethernet over WDM is now the preferred approach for scaling transport networks for emerging applications such as Carrier Ethernet and triple play. To implement this approach, next-generation network planners can choose from among several technology options that combine the efficiencies of Ethernet switching with the enormous bandwidth of WDM optical transport ­technology. 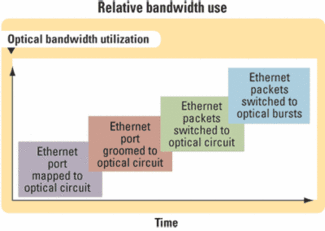 Several factors combine to drive this shift. The meta trend is the dramatic increase in IP over Ethernet packet traffic relative to TDM traffic. SONET/SDH is optimized for point-to-point TDM and is inefficient for Ethernet aggregation. Another key factor is the advent of inexpensive 10-Gbit/sec Ethernet interfaces. 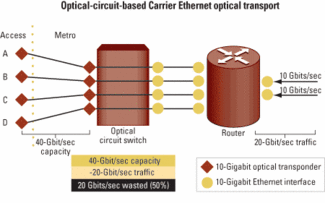 Until recently, carriers had been willing to pay more for Ethernet-over-SONET/SDH equipment to get the benefits of a deterministic network, sub-50-msec recovery, and robust operations, administration, and maintenance (OA&M). As network traffic demands grew beyond SONET/SDH’s maximum capacity of OC-192 (10 Gbits/sec per ring), WDM optical circuit switches were introduced to allow stacking of multiple SONET/SDH rings on a single fiber. Stacked-ring architectures are expensive because of the number of non-revenue (non-customer facing) ports that must be deployed to transport packet service traffic.

The ITU-T Optical Transport Network (OTN) G.709 standard was developed early this decade to enable interoperability of optical multiplexers on point-to-point spans. OTN provides robust OA&M and forward error correction (FEC) along with support for Fibre Channel, ESCON, SONET/SDH, and Ethernet. Unfortunately, OTN is not optimized for Ethernet transport. The OTN-1 container is defined with a 2.5-Gbit/sec payload, so a Gigabit Ethernet port may be mapped to an OTN-1, but with a lot of waste.

Many existing and emerging standards focus on transforming Ethernet from an enterprise-class protocol to a carrier-grade service and transport engine. 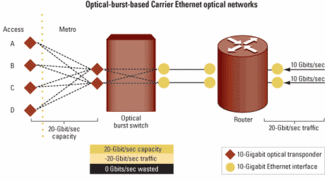 In 2004 the Metro Ethernet Forum (MEF) published technical specifications for carrier-grade Ethernet service definitions that bear considerable resemblance to the very successful Frame Relay service standards, albeit at much higher data rates than T1 or DS3.

The MEF’s Ethernet Private Line (EPL) service is defined as a point-to-point, private Ethernet circuit with a guaranteed data rate called committed information rate (CIR). EPLs are offered by many carriers today over existing SONET/SDH and OTN transport systems since they are essentially circuits, with no Ethernet aggregation, switching, or need for fine-grain quality-of-service control.

The MEF’s Ethernet LAN (E-LAN) service is defined as a point-to-multipoint Layer 2 Ethernet service. Market research firm Vertical Systems Group forecasts that E-LAN will be the fastest-growing Ethernet service as enterprise subscribers transition from Frame Relay to Carrier Ethernet services. A problem this creates for network operators is that E-LAN optical transport is expensive to implement with optical circuit technologies, since traffic for each E‑LAN access line must be backhauled to a Layer 2 switch for connectivity, which wastes capacity and increases costs.

E-LAN services are commonly used as the underlying infrastructure for higher layer services such as IPTV. In this case, however, the emulated broadcast domain is implemented over a series of point-to-point connections, which results in an inefficient solution.

Recent proposals from the ITU-T and IEEE take packet optical transport to the next level. Transport MPLS (T‑MPLS) is an emerging ITU standard specifically defined to provide transport-grade MPLS functionality, focusing on aspects such as OA&M and protection switching for the packet transport network.

Figure 2 shows an optical circuit system that maps Ethernet ports to optical circuits. In this example, 20 Gbits/sec of traffic is coming from the core; the router delivers the traffic to the access nodes across the metro Carrier Ethernet optical transport network. The figure shows how optical circuits result in over-provisioning of capacity to transport the offered load. Since 2.5-Gbit/sec wavelengths will not be enough, 10-Gbit/sec wavelengths must be deployed, which results in idle capacity and increased costs.

As with the other Ethernet-over-WDM approaches, OBS offers sub-50-msec recovery and provides deterministic, circuit-like transport of Ethernet packets. Figure 3 illustrates the relative bandwidth utilization of OBS.

Networking expenses traditionally are broken down into capital and operational expenses, and together they compose the total cost of ownership for Carrier Ethernet optical networks.

Ethernet-over-WDM systems that provide Ethernet port grooming and Layer 2 switching reduce the number of non-revenue Ethernet ports that face the router by increasing the connectivity within the optical circuit switch.

Ethernet-over-WDM optical-circuit-based platforms require two dedicated transponders for each point-to-point connection, whereas optical burst systems share transponder capacity across all nodes on the ring. As a result, OBS networks typically require about half the number of transponders and associated packet switch ports that an optical circuit architecture requires.

Network planners should consider both the mix of Ethernet services currently offered (most likely just EPL) and the inevitable request from marketing to offer additional E-LAN services from a common transport network. The more E-LAN services sold, the more complex the transport design becomes with optical circuit systems, as point-to-multipoint connections must be backhauled over optical circuits through non-revenue ports.

Ethernet over WDM is now the preferred approach for scaling transport networks for emerging applications such as Carrier Ethernet and triple play. Several alternatives are available with differing degrees of bandwidth utilization and cost structures. By combining the efficiency of Ethernet with the circuit-like controls of T-MPLS or PBT and the enormous bandwidth of WDM, Carrier Ethernet optical transport grows more ­affordable.

Mark Showalter is director, product marketing, at Matisse Networks (www.matissenetworks.com). With more than 20 years of experience in carrier data communications networking, he has helped drive the transformation of public networks from circuit based to packet based, with an emphasis on optical, IP, and Ethernet network technologies during his career at Pacific Bell, Ascend Communications, and other telecom equipment startups.