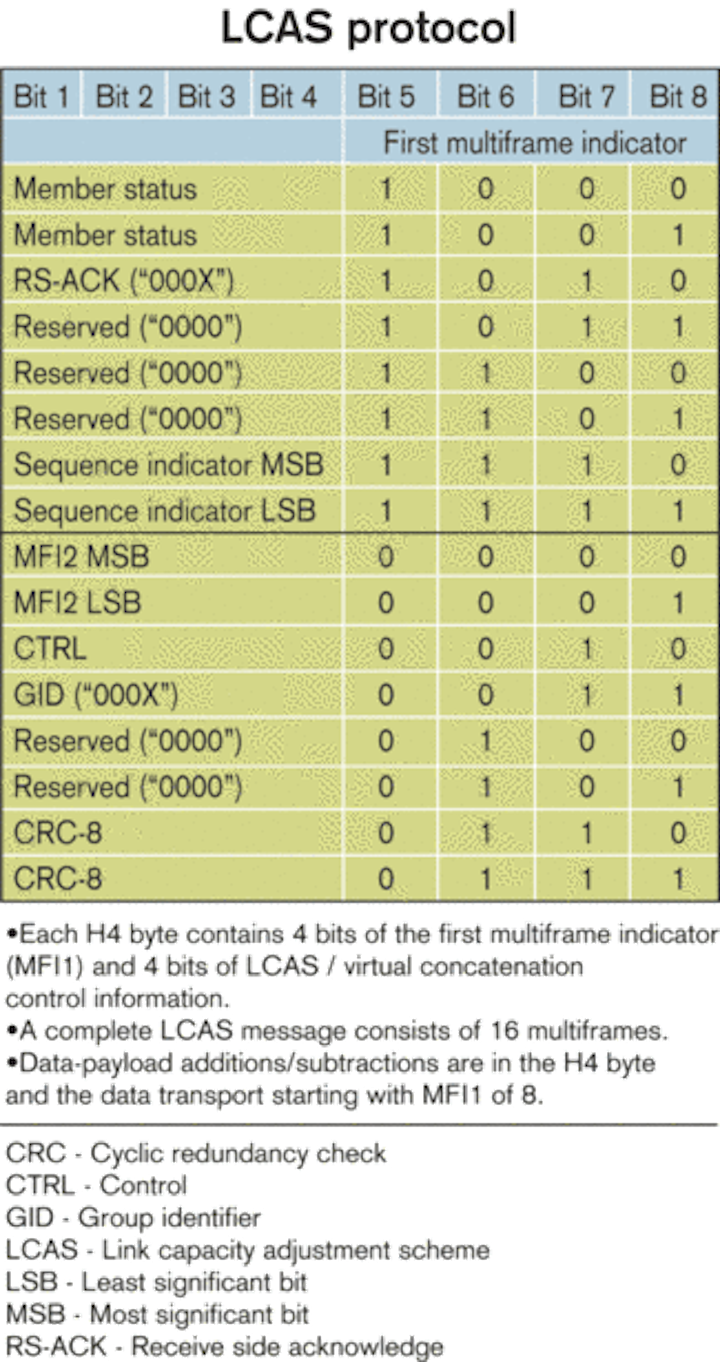 Ethernet over SONET/SDH (EoS) capabilities will serve as a cornerstone of next-generation systems. These capabilities are also being added to virtually every type of existing SONET/SDH equipment. Virtual concatenation (VC) and generic framing protocol (GFP) are the protocol foundation upon which these capabilities are built. Another EoS protocol that is attracting a great deal of interest is link capacity adjustment scheme (LCAS), a method of using SONET/SDH overhead to communicate the status of a VC connection. It allows resizing of link capacity without traffic loss. A key enabler of EoS networks, LCAS is the most challenging protocol to implement from a silicon and system standpoint.

This difficulty of implementation is leading some vendors whose products lack LCAS capability to downplay its importance, primarily because carriers cannot provide dynamic bandwidth on demand services to customers today. Those particular vendors focus on the best-known feature of LCAS, disregard how LCAS is currently deployed, and ignore the other benefits the protocol brings to carriers. 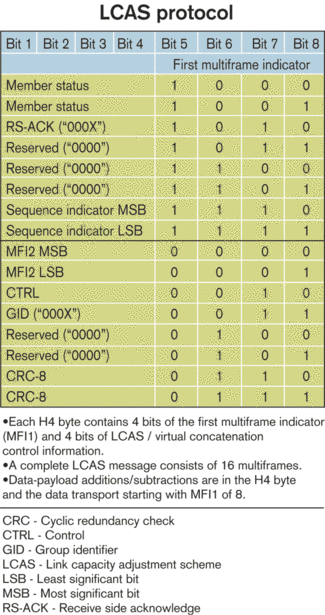 Figure 1. SONET/SDH path overhead bytes provide performance-monitoring statistics on the status of the virtual concatenation connection, allowing both links to check the health of the new connection before a data transfer is activated.

LCAS-enabled bandwidth on demand is touted as the killer app for VC because it allows an Ethernet subscriber to dynamically change the amount of bandwidth available without incurring a traffic loss event, also known as "hitless" reconfiguration. Additional STS-1/VC-3 or VT1.5/TU-12 tributaries can be added or subtracted from a connection through the use of bidirectional LCAS communication. The SONET/SDH path overhead bytes dedicated for this communication carefully arbitrate the change in bandwidth to ensure not a single bit is discarded during this operation and provide vital performance monitoring statistics on the status of the VC connection (see Figure 1). These performance monitors allow both links to check the health of new connections before they are activated for data transfer and quickly detect failures to smoothly decrease the size of the connection by discarding tributaries with a high bit-error rate.

Bandwidth on demand is possible without LCAS, but the hitless nature of connection resizing is forfeited. LCAS critics opine that data connections can survive a small temporary hit. They believe LCAS does not provide sufficient incremental value to justify its complexity. From the perspective of a single subscriber, they are probably correct, but this argument ignores how carriers are deploying LCAS today.

LCAS is not deployed as a subscriber interface today. The provisioning and billing infrastructure does not yet support it. Instead, LCAS is deployed within the metro core of the network, allowing carriers to reprovision the size of data transport pipes within their own network (see Figure 2). During the day, the majority of bandwidth demand within a metropolitan area will be concentrated around the business parks, and during the evening it will shift toward the residential areas. LCAS allows carriers to dynamically resize the connections to their edge equipment (DSLAMs, cable equipment, next-generation SONET/SDH equipment) that serves a varying time-of-day subscriber load. These resizing events must be hitless, since potentially thousands of subscribers can be affected. 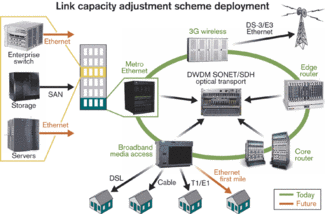 Figure 2. Today, link capacity adjustment scheme (LCAS) is deployed in the metro core allowing carriers to reprovision the size of their own data transport pipes. In the future, LCAS likely will be extended beyond the carrier network to allow individual customers to self-provision the capacity of their own connection.

Once management, provisioning, and billing systems of the carriers are upgraded, it is likely that LCAS will be extended beyond the carrier network to allow individual customers to self-provision the capacity of their own connection. The main challenge that carriers face while deploying these new services based on these standards (GFP, VC, and LCAS) is the software effort required to upgrade the network and element management system (NMS/EMS) in a standardized and compatible manner. Efforts are underway in standards bodies to address these problems, such as the G.ASTN (global automatically switched transport network) initiative at the International Telecommunication Union and the Generalized MPLS initiative of the Internet Engineering Task Force.

It is likely this capability will be extended only to larger customers—those that currently purchase leased-line TDM and frame relay (FR) connections. Those customers with DSL or cable modems at home or even direct Ethernet in the first mile customers in Asia are not likely to have LCAS anytime soon. Layer 2 traffic management, shaping, and policing within the cable headend or DSLAM will provide the dynamic flow control necessary to guarantee a specific data rate to residential users.

Traditional SONET/SDH concatenation requires that contiguous timeslots be available to establish a connection such as an OC-48c (2.4 Gbits/sec) or OC-12c (599.04 Mbits/sec). Over time, this requirement results in what carriers refer to as stranded bandwidth. There may be two fibers interconnecting two points with a total of 12 STS-1 timeslots unused, but for an OC-12c connection to be carried, these timeslots must be on the same fiber as well as adjacent to each other. Previously provisioned connections that are established cannot be relocated from one fiber to another to create room for the OC-12c without interrupting service. VC eliminates the requirement that these timeslots be contiguous; the individual timeslot connections don't even need to be on the same fiber or take the same physical route between two points. This feature is called diverse routing.

Diverse routing is further enhanced by LCAS. Carriers can hitlessly reroute the traffic through their network to eliminate stranded bandwidth. Provisioned connections can be moved from one geographical path to another to create space for legacy voice services or avoid specific fiber runs that will be brought out of service. LCAS allows carriers to eliminate the stranded bandwidth that traditional concatenation creates and support dynamic load balancing and route optimization. VC and LCAS are also deployed in applications outside EoS, specifically core and edge routers that traditionally used multilink point-to-point protocol, FR, and packet over SONET with traditional fixed concatenation. The ability to dynamically resize pipes is not the key feature—provisioning flexibility is.

New service models are enabled by the capability to hitlessly tear down and reestablish different geographic routes for SONET/SDH data connections. Bandwidth previously reserved for SONET/SDH protection can be included in the provisioning pool for use by "gray" bandwidth, or low-priority interruptible traffic. Bidirectional line-switched ring (BLSR) protection schemes require that 50% of the bandwidth be interruptible at any point, and unidirectional path-switched ring (UPSR) protection schemes waste 50% of the bandwidth to provide 50-msec recovery times. There are no alternatives for fixed TDM data, but the provisioning flexibility of VC and the performance monitoring of LCAS open up several powerful scenarios.

A well-engineered LCAS implementation with the proper silicon and software can detect failures and remove failed members in <100 msec, approaching SONET/SDH protection speeds. This quick recovery allows the use of the gray bandwidth available in BLSR rings and in some circumstances could replace UPSR protection, recovering 50% of the transport bandwidth in the network by carefully routing traffic through different geographic nodes and usin n+1 protection rather than 1+1 protection.

Another model not currently in use in transport networks is the concept of asymmetrical connectivity. DSLAMs and cable headends can use asymmetrical line rates to communicate primarily with households whose demands for downloading currently (and in the future) exceed the demand for uploading bandwidth. The SONET/SDH transport network was designed around voice traffic, which is bidirectional. The performance monitoring capabilities within LCAS enable asymmetrical connections, allowing DSLAMs to transmit with thin pipes and receive with fat pipes—something not previously possible.

Even though it receives the majority of the attention when people talk about EoS and VC, bandwidth on demand from a carrier to a subscriber using LCAS is not something we will see in the near future. That does not mean LCAS is not useful-rather, this protocol is emerging as a valuable tool for simplifying the provisioning of carrier data networks. LCAS allows carriers to dynamically change the routing and capacity of their data connections, which is especially important as optical networks reach further into office parks and pedestals containing DSLAMs and cable headends. LCAS is also a potential tool for enabling new service models and someday bandwidth on demand to offices and homes.