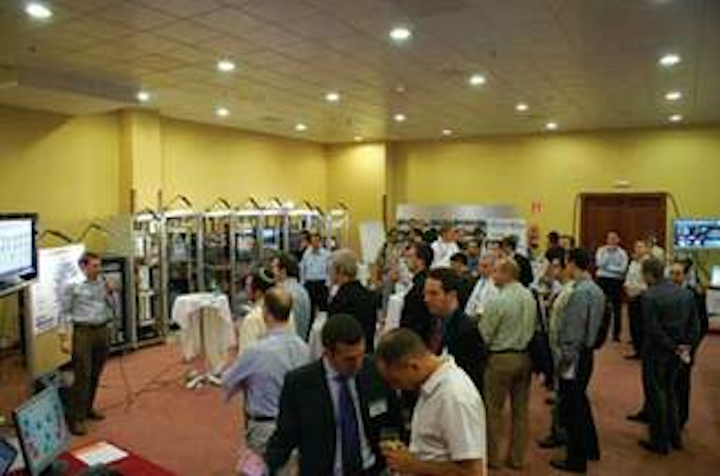 The Carrier Ethernet World Congress (CEWC)-the official annual event of the Metro Ethernet Forum (MEF) that is organized by IIR-attracted more than 450 industry senior professionals to Madrid this past October. It’s still early days for Carrier Ethernet, but the 30% increase in delegates from last year’s event mirrors the equally high interest, ambitious market forecasts, and future potential for this networking approach.

Ethernet is in its fourth decade of existence, and proponents have their sights firmly set on the carrier domain to drive further expansion. Holding the flag is the MEF, which presides over a range of technical specification, certification, and award activities for both vendors and operators to accelerate Carrier Ethernet adoption.

The MEF has a new focus on gaining service provider members and even certifying services, marking its progress as a mature cross-functional industry forum. The Carrier Ethernet European Service Provider of the Year awards were presented in Madrid by the MEF to COLT Telecom and Orange Business Services for their respective achievements in innovation and business.

The limitations of Ethernet for carrier networking have been widely apparent since the turn of the century, triggering many standardization and commercial initiatives intended to address the problems. CEWC is an ideal annual milestone to understand what the industry has achieved and since 2005’s event, it’s clear that decisive progress has been made toward Carrier Ethernet.

Ethernet has long been promoted as being simple, cheap, and ubiquitous-at least in enterprise networks. As Ethernet transforms itself into a carrier technology, the priorities change to manageability, economy of scale, and interconnection. A scorecard over the past year might award the industry as follows:

Manageability: Grade A+. Manageability, particularly Ethernet operations, administration, and maintenance (OAM) tools, has achieved strong progress. This was the number one issue at CEWC 2005, but with the approval of ITU-T Y.1731 and the IEEE 802.3ah OAM standards, the imminent approval of 802.1ag, and widespread vendor support, Ethernet now has a model OAM toolkit. In parallel, virtual private LAN services (VPLS) are being deployed and are becoming established as a mainstream approach to provide managed scalability for Ethernet VPN services and infrastructure for IPTV.

Economy of scale: Grade B-. Carrier network protection, traffic engineering, and quality of service (QoS) are dependent on the transport layer, whether SDH, MPLS, Ethernet, or WDM. With continuing debate on capex and opex, two new technologies for Carrier Ethernet have been added to the list of choices: Transport-MPLS (T-MPLS), defined by ITU-T, and Provider Backbone Transport (PBT), proposed by Nortel. How the Carrier Ethernet industry will offer best economy of scale to carriers with so many choices available remains unclear. 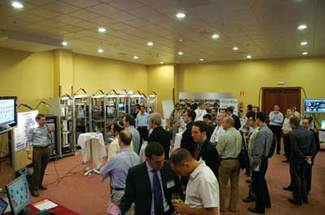 The interoperability showcase at CEWC 2006 featured a wide variety of vendors. The demonstration showed significant progress from last year in the areas of multivendor OAM and link aggregation, as well as successful testing of MEF bandwidth profiles and service performance. (Photo courtesy of EANTC)

Interconnection: Grade C. Much remains to be done before Ethernet can be treated by operators as simply as an E1 or DS1 circuit. Equipment certification is well in hand thanks to the MEF’s initiatives, and the door is opening to multivendor network management with some capabilities demonstrated at CEWC’s interoperability showcase. However, it’s early days for service provider interconnection and interworking, particularly across heterogeneous networks. Standards are not yet developed to help solve what is perhaps the biggest challenge facing service providers.

In general terms, the demonstration network consisted of an IP/MPLS core supporting PWE3 and VPLS and a VLAN-based aggregation domain using Ethernet, SDH, resilient packet ring (RPR), and T-MPLS with fiber, radio, and copper access technologies. The showcase at last year’s CEWC uncovered many problems, including a lack of implementation of resilience and OAM mechanisms and a lack of end-to-end provisioning and fault management. In 2006, successes included multivendor OAM and link aggregation, and successful testing of MEF bandwidth profiles and service performance. MPLS was judged a mature and reliable approach with no issues supporting basic Ethernet services.

Ethernet scalability has been a recurring problem for operators for many years, and while IEEE’s 802.1ah draft Provider Backbone Bridge (PBB) standard aims to fix this once and for all, perhaps this standard is just too late to catch the market momentum. Carriers can’t wait; they feel an urgent need to roll out Ethernet services and IPTV video services, and VPLS/MPLS is proving an effective Carrier Ethernet platform in line with their existing IP/MPLS convergence strategy.

Two new packet transport technologies were actively debated at CEWC: T-MPLS and PBT. T-MPLS has been defined by the ITU-T to align MPLS with SONET/SDH/optical transport network (OTN) architecture and so offer simpler packet networking that is lined up with the existing multiservice network. Nortel proposes that PBT will make Ethernet into a managed, connection-oriented approach with stronger protection and QoS attributes-more like SONET/SDH, in other words.

The backers of T-MPLS aim to repeat the mainstream success of next-generation SONET/SDH, while Nortel will want PBT to avoid the fate of RPR, which was scarcely mentioned during the entire congress. In the big picture, T-MPLS might be seen as broadening the network scope of MPLS, while PBT-however valid the concept-unfortunately adds to the number of Ethernet factions vying for carriers’ attention.

It’s clear that choices are still multiplying in Carrier Ethernet and there is danger in complexity since this will slow carriers’ potential investment. Carrier Ethernet is still a young market, and over the next year we should naturally start to see more clarity as to future market direction. If the cost promise of Ethernet is to be achieved, the industry needs fewer choices, implying more standardization. Indeed, wider adoption with economy of scale almost certainly depends on establishing more consensus on the optimal approach, which implies that the window of opportunity for new technologies is closing.

With video services widely seen as the industry driver, and next-generation network transformation forming a strategic backdrop, there is plenty of commercial imperative for Carrier Ethernet deployment. And with the recent multi-100-Gbit/sec transmission demonstrations by Lucent and NTT, it’s clear that the next much anticipated 10× jump in Ethernet speed is actually feasible. Carrier Ethernet will have a bright future if the progress demonstrated over the past year can be sustained.

Ethernet has a track record of being a networking chameleon. It is rapidly changing its colors to become Carrier Ethernet. Exactly what blend of color it will eventually become remains to be seen-tune in next year to CEWC 2007.

Mark Lum is an independent consulting analyst working in optical, WDM/OTN, SDH, and Carrier Ethernet markets (www.marklum.net). His clients include equipment vendors, service providers, and the investment community. He was also opening chairman at the Carrier Ethernet World Congress (CEWC).