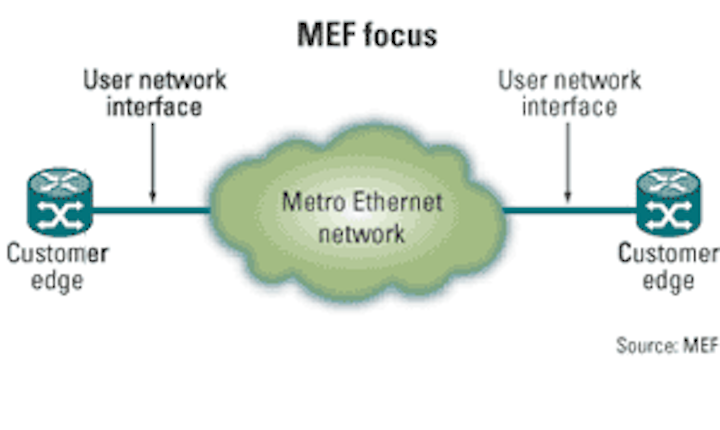 Standardized more than 25 years ago, Ethernet has enjoyed unprecedented growth and dominance within corporate networks worldwide. Over the last decade, speeds have increased exponentially from 10 Mbits/sec to 10 Gbits/sec.

Ethernet has recently reached beyond the enterprise with successful and profitable deployments in domestic and international access and metro networks. Two primary factors have contributed to this trend. First, interoperable, cost-effective optical transceivers, at speeds of 100 Mbits/sec and higher, are available from multiple vendors. These transceivers have evolved from bulky, fixed pin-in-hole components to small-form-factor, pluggable modules that support transmission distances useful in today’s metro networks.

Very low-cost 10- and 20-km optics enable large-scale, diverse topologies for varied geographies and customer types. As Moore’s Law drives component and system costs down over time, the cost of optical transceivers has increasingly become a larger portion of the total link cost. Advances in materials engineering and assembly techniques have contributed to the aggressive prices on the market. As a result, Ethernet provides the best cost-per-bit of any networking technology, wherever it is deployed.

The second factor involves a shift in thinking about ­Ethernet’s capabilities and potential role in service provider networks. Historically, Ethernet has been associated with a particular data-link layer (Layer 2 in the Open Systems Interconnection reference model) media access mechanism, a frame format, and a set of port types (e.g., 10Base-T). However, vendors began adding more sophistication to Ethernet switch/routers, such as traffic queuing, resiliency mechanisms, and simpler management interfaces. Ethernet was now primed to be offered as a service to business and residential customers.

A number of vendors and service providers banded together to develop standards and implementation agreements associated with “Ethernet services.” Known as the Metro Ethernet Forum (MEF), its mission is to “accelerate worldwide adoption of carrier-class Ethernet networks and services.” Its work toward the development of “Carrier Ethernet” promises to transform service provider networks around the world.

Figure 1 represents an initial area of focus for the MEF in its development of Carrier Ethernet. By defining a user network interface (UNI) and distinct minimum requirements of customer equipment (CE) and provider equipment (PE), the MEF overcame the missing definitions in the market. Now vendors-and, more important, service providers-have a common lexicon for specifying, requesting, and delivering Ethernet services.

The MEF recognized the gap in the industry for developing, marketing, and selling Ethernet services. In its mission statement, MEF has coined the term “Carrier-class Ethernet.” This is essentially enterprise Ethernet with enhancements that enable carriers to reliably deploy, manage, troubleshoot, and operate Ethernet services in large-scale networks. Some of the significant improvements are listed below:

• Resilience-While Ethernet has superior multicast and broadcast capabilities, if loops are accidentally connected, Ethernet packets will continuously multiply and loop forever. Traditional Ethernet relied on nonoptimized loop-prevention mechanisms that often required seconds or even minutes to resolve. Carrier Ethernet defines the requirement for SONET-like sub-50-msec failover and restoration performance. Specifically, some vendors have enhanced the performance of the Rapid Spanning Tree Protocol (RSTP) to meet this requirement. 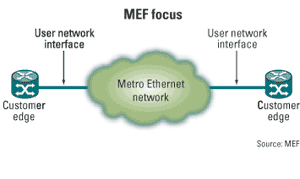 Figure 1. The MEF started its work by establishing definitions that vendors and service providers can use to describe and specify requirements and services.

• Operations, administration, and maintenance (OAM)-Troubleshooting conventional Ethernet networks often involved a walk to an equipment room by support staff after someone placed a complaint. Now, Carrier Ethernet is deployed at the customer premises, in remote terminals, street-side pedestals, remote central offices, and other diverse, unstaffed locations. As a result, the IEEE and MEF defined a set of protocols and tools to enable remote troubleshooting, diagnostics, and monitoring capabilities to reduce truck rolls and lower operational expenses.

• Quality of service-Carrier Ethernet networks transport voice, standard- and high-definition video, and broadband data services to a mixture of end customers. Consequently, MEF specified the requirements for sophisticated handling to ensure service levels and minimize frame delay and frame-delay variation (also known as latency and jitter). Figure 2 represents a sampling of services that can be transported over metro networks.

The term Carrier Ethernet embodies a select but growing number of Ethernet devices certified to provide resilient, efficient, guaranteed, scalable Ethernet services. A number of vendors have rallied around this initiative to provide gear that is compliant to the MEF standards. Similarly, vendors both domestic and international have embraced the unified definition of Carrier Ethernet. In fact, many service providers have directly contributed to the development of the standards-a very important fact. With both equipment vendors and service providers cooperating, the resultant gear supports the demand for Ethernet services and meets market needs. 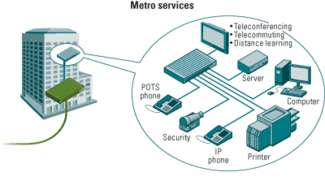 Figure 2. To be an effective metro transport protocol, Ethernet must support a range of voice, video, and data services.

It’s clear why service providers have helped the MEF in its work. Carrier Ethernet enables lower overall capital expenses. Ethernet’s long-standing characteristic has been its cost-effectiveness. It won the enterprise with superior price and performance and is poised to repeat that success in the access and metro spaces. Markets such as Ethernet with multiple interoperable vendors competitively drive prices down. As a large, growing market, Ethernet enjoys volume advantages over other competing technologies.

While capital expense is an important factor, often the recurring operating expenses determine profitability. Traditional Ethernet was often confined in a single building or campus with dedicated staff for management and troubleshooting. Alarms were indicated by flashing LEDs, easily visible when the staff was dispatched to a wiring closet. In access and metro networks spanning tens and hundreds of kilometers, truck rolls become cost-prohibitive. Recognizing this limitation, Ethernet was enhanced to include OAM capabilities as part of the IEEE 802.3ah Ethernet in the First Mile project. The OAM project defined the protocol and mechanisms for communicating diagnostic and troubleshooting information.

By establishing well-defined Ethernet services, service providers can communicate requirements to vendors and establish primary and secondary sourcing agreements-an obvious benefit to those investing capital. But what are the advantages for end customers?

Legacy circuit-based services such as Frame Relay and time-domain multiplexing (TDM) offer committed information rate (CIR) guarantees with no burst capabilities. Ethernet, on the other hand, is a packet-based technology and supports both committed and excess information rate (EIR) capabilities. Customers can order a service with committed bandwidth and the possibility for excess capacity, if available. Ethernet’s packet-based nature also affords service increments ranging from 64 kbits/sec to 1 Mbit/sec and more. Customers can more easily fine-tune bandwidth requirements as business use grows. A number of Ethernet service offerings provide customer portals for self-provisioning and configuring new services. Gone are the days of waiting three months for a lowly T-1 line.

Another benefit is being able to directly connect the office LAN or router to the customer edge device via Ethernet. Avoiding a protocol translation reduces frame delay (latency) and improves service efficiency.

Customers can use a single Ethernet connection from a service provider to connect to the Internet, connect via Layer 2 virtual private network (VPN) to other sites, and also have voice-over-IP (VoIP) and IPTV services simultaneously. Often, services are partitioned logically using virtual LANs (VLANs) and treated uniquely within the provider’s access and metro network. Many vendors support Ethernet frames up to 9 kB in length, capable of supporting lower-cost IP-based storage networks and remote backup solutions necessary for meeting Sarbanes-Oxley regulations.

The availability and proximity of fiber drops for business customers is a limiting factor on the uptake of Ethernet services today. Carriers worldwide are investing in fiber deployments and this hurdle will be lowered over time.

CFM, for instance, is another Transport Services Layer protocol. Further advances are coming for performance monitoring. 802.1ag frames will be able to contain timestamps and measure frame delay and frame-delay variation of services. These metrics will enable performance measurement across access and metro networks spanning multiple links. 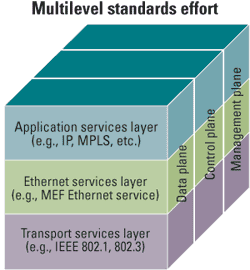 Figure 3. The creation of a complete set of Carrier Ethernet specifications has required the work of several standards bodies and the leveraging of a variety of technologies.

The already SONET-like RSTP performance attained by some vendors will be further enhanced by IEEE 802.1aq Shortest Path Bridging. This project will improve failover performance for the increasingly complex mesh and ring topologies popular in metro networks.

Carrier Ethernet is poised for explosive growth internationally. In addition to becoming the de facto connectivity approach for business services, Carrier Ethernet will also serve as the transport means for other technologies and services. For instance, fiber-based Gigabit Ethernet serves as the backhaul for IP-based DSLAMs and mobile base stations.

Economic and technical developments have contributed to the rise of Carrier Ethernet deployments globally. Service providers are lured by the cost advantages for both capital and operating expenses. End customers desire higher bandwidth and reliable services that support a wide variety of applications. Due to the broad industry support and continued investment in performance and management enhancements, Carrier Ethernet is poised to deliver today and in the future.

Kevin Daines is chief technology officer for World Wide Packets (Spokane, WA; www.worldwidepackets.com). He has an extensive background in Ethernet technology, with more than 15 years of experience in engineering and networking. Daines was appointed to the role of CTO at World Wide Packets after 5 years as vice president of hardware engineering. Prior to joining World Wide Packets, he worked for Grand Junction Networks (Cisco), DiviCom (LSI Logic), and Packet Engines (Alcatel).