The Rise of SDN in Open Optical Networks

With all the buzz about the promise of software-defined networking (SDN), it’s easy to miss the real-world impact that the technology is starting to have. But dig below the hype and you see many major operators starting to seriously explore SDN-based solutions. Some have already begun turning their network into a programmable resource under central software-based control. 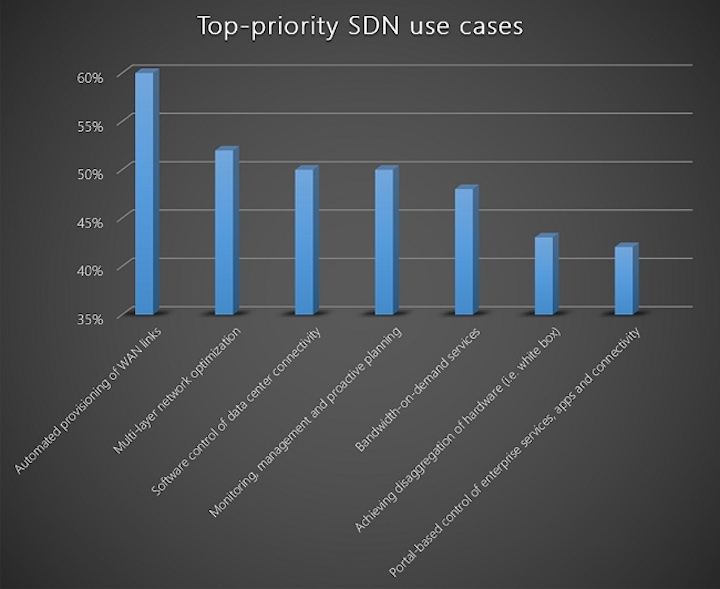 With all the buzz about the promise of software-defined networking (SDN), it’s easy to miss the real-world impact that the technology is starting to have. But dig below the hype and you see many major operators starting to seriously explore SDN-based solutions. Some have already begun turning their network into a programmable resource under central software-based control.

Service providers, enterprises, and Web 2.0 companies across the world are right now pursuing solutions that meet changing customer needs with automated equipment provision driven by service-level requests. What’s more, many are choosing to implement SDN through open standards for simplified network design and operation, with instructions provided by SDN controllers instead of multiple, vendor-specific devices and protocols.

What’s the fuss about?

Key drivers for SDN include the need for greater operational efficiency to enable the delivery of self-provided bandwidth services and cloud-based hosting services that require real-time connections. The requirement for interoperability to enable layered architecture featuring open interfaces and automated control is another compelling reason to leverage SDN. And, of course, SDN turning the transport network into a programmable resource creates the ability to offer a host of lucrative new services that would never previously have been possible.

Heavy Reading’s 2017 carrier SDN survey of 142 network operators around the globe found that the top three priorities for use cases were: 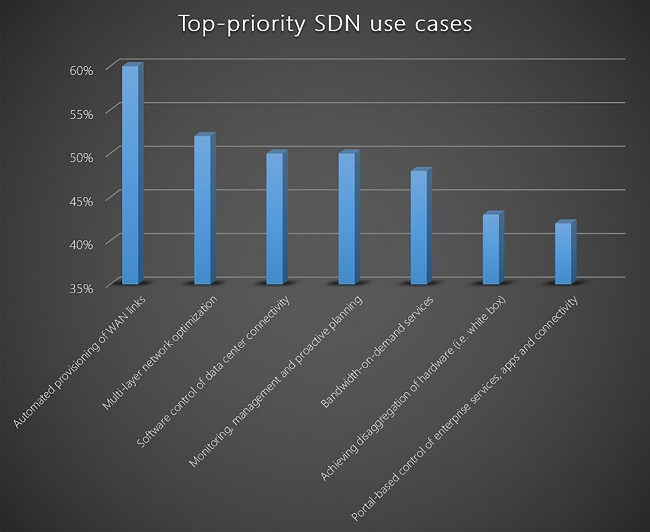 Clearly automation as a means of driving down operational expenditures is a significant driver for many end users. DCI networks can range from the simplest point-to-point links to complex national and international networks. Even for the simplest links, application programmable interfaces (APIs) are required to simplify network operations and automate connectivity. Such solutions are often coupled with another growing trend, zero touch provisioning (ZTP), which further reduces human touch/interaction time with networking equipment. ZTP enables newly installed equipment to be turned up with the absolute minimum amount of human intervention. The goal here is to be able to scale deployment capability without having to equivalently scale the operations team’s size.

The ability for SDN-enabled equipment to continuously report network performance and telemetry data to a centralized controller for analysis, delivering network optimization insights, is also now being coupled with another growing trend, the use of artificial intelligence and machine learning (AI/ML). In one example, utilizing advances in AI/ML technology, networking data can be assessed to determine if deployed routes have sufficient margin to increase transmission rates (i.e., margin mining), with the SDN controller then automatically optimizing the traffic rate of any transceivers.

Multi-layer traffic analysis requires complex algorithms to determine optimum traffic maps. SDN interfaces have enabled controllers to interface with equipment in a multi-vendor environment, often with one vendor used in Layer 1 and a second vendor used in Layers 2/3. The ability to gather and analyze data in a multi-vendor/multi-technology scenario enables the operator to squeeze the maximum amount of revenue out of deployed network assets and is a primary business driver for many SDN deployments.

How SDN will keep pace

So what are the next steps and is the pace of SDN deployments ever going to pick up to match the hype? Well, the key to answering these questions is to look at why progress has been so much slower than many first thought, and that’s in large part down to the wide and growing range of APIs that today’s vendors are forced to support. These software intermediaries are essential to enable services to interact. But there are currently several of them competing to be the most popular model for optical networks, and no clear front runner has emerged so far.

There are probably four serious contenders leading the device/network API pack, each with strengths and weaknesses for SDN implementation.

Of course, it’s a different picture for service level APIs, where there is one clear leader. Launched in January, MEF’s LSO Presto has been at the heart of several tests looking to transform Ethernet service. It’s also being defined for transport networks.

So there’s certainly a lot of progress being made in API definitions. But what the industry’s really looking for next to accelerate adoption of SDN-driven networking is for the market to select one or two APIs as the winner. When vendors are clear which will take center stage, it will become a great deal easier to build bespoke solutions tailored to specific operator use cases. Only then will operators start to reap the benefits they desire from the primary use cases offered by SDN-supported solutions that are so tantalizingly close at hand.

Watch this space. In the next couple of years, we’re likely to see SDN coupled with other industry mega-trends, namely ZTP and AI/ML, to open up additional operations cost savings and revenue opportunities.

Niall Robinson is ADVA’sVP of global business development, specializing in moving cutting-edge technology from the lab into the network. He has played an instrumental role in transforming the data center interconnect (DCI) market, working with companies such as Facebook to create open optical packet transport systems. Niall has spent more than 25 years in the telecommunications industry and has worked at all levels, from service provider to component provider. During the course of his career he has generated 20 patents. He has an M.Sc. in microwave and optical communications from University College London and a B.Eng. in electrical, electronics, and communications engineering from the University of Newcastle.