Why Ethernet is still the answer for new network requirements 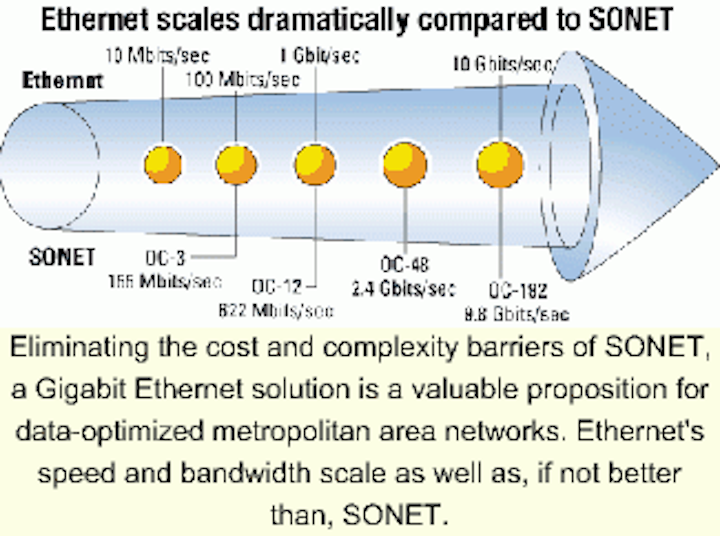 Promising technologies of the past have given way to a new industry convergence toward Internet Protocol, Ethernet, and switching to deliver a simplified, high-performance network.

The explosive growth of the Internet economy has been fueled by both existing and new markets, including the traditional small, medium, and large enterprises and the new-age service providers, Web content providers, and application service providers.

Mission-critical Web applications-server collocation, enterprise resource planning, e-commerce, voice-over-Internet Protocol (VoIP), and private intranets-are redefining how business is conducted. Information is available from multiple sources, network traffic is unpredictable, and performance demands are great. Change is rapid and constant, and the emergence of newer applications will keep the momentum of change moving for some time.

New requirements for the Internet infrastructure are surfacing constantly. Technology focus and direction has shifted in the past few years to IP and Ethernet-based switching networks to deliver a simplified, high-performance network architecture to meet existing and future application requirements. ATM and other promising technologies of the past have given way to this new industry convergence toward IP, Ethernet, and switching.

But for today's service providers and large enterprises, their bottom line depends on how well their network infrastructure is built to meet their application requirements. As a result, when we talk about optimizing performance of the network for improving the bottom line, we can more easily visualize overall performance if we think of it as a three-legged stool. Each leg represents an area that can become the bottleneck-in this case, overall performance is only as good as the weakest leg.

We can think of each of these three legs as represented by central processing unit, input/output (storage), and network performance. The network has typically been perceived as being the weak link, always having to play catch up. But since we started with the Ethernet evolution seven years ago, Ethernet has scaled from 10 to 100 Mbits/sec, then quickly to 1 Gbit/sec. Now, with 10-Gigabit Ethernet on the horizon, network performance will no longer be the bottleneck. 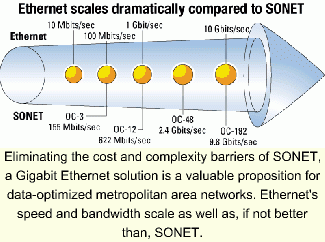 Eliminating the cost and complexity barriers of SONET, a Gigabit Ethernet solution is a valuable proposition for data-optimized metropolitan area networks. Ethernet's speed and bandwidth scale as well as, if not better than, SONET.

The 10-Gigabit Ethernet Alliance was formed in January 2000 to help accelerate the standards development effort. By providing a forum for building consensus on technical proposals, the alliance supplements the IEEE efforts by facilitating the convergence of ideas. Once a consensus is built within alliance members, proposals are presented at subsequent IEEE meetings. Since the technical committee of the alliance can meet as needed to work out technical issues, consensus can be built much more quickly and timely.

The design objectives of the IEEE 802.3ae 10-Gigabit Ethernet Task Force include the following:

The 802.3ae efforts are very focused, making the minimal changes required to the Ethernet standards to scale Ethernet to 10 Gbits/sec. The delivery of the LAN PHY will operate at full 10 Gbits/sec and allow the creation of an all-optical, end-to-end Ethernet-based network that will easily connect the LAN to the MAN and WAN over a single, consistent Ethernet infrastructure. The inclusion of the WAN physical layer at the SONET/SDH rate of 9.584640 Gbits/sec allows service providers to initially leverage their existing SONET/SDH infrastructure by delivering 10-Gigabit Ethernet services over it.

The 802.3 task force is well on its way to implementating the draft specifications. New 10-Gigabit Ethernet prototypes and perhaps even products from various vendors will begin to appear on the market in the first half of this year.

An end-to-end-Ethernet network is inevitable. It is the only approach that makes a lot of sense from a simple performance standpoint as well as the price/performance/management perspective. But the migration paths to a 10-Gigabit Ethernet "Ethernet-everywhere" infrastructure-uniting the core networks with the edge networks-will take several different routes, depending on application and how quickly the migration needs to happen.

The enterprise is already an Ethernet-everywhere environment. With 10-Gigabit Ethernet, however, enterprise managers will be able to leverage their existing Ethernet investment while increasing network performance. They will have next-generation speed at their disposal, allowing them to scale everything up without having to change topologies or equipment. This capability will deliver tremendous advantages as LAN bandwidth requirements continue to soar with the increasing adoption of bandwidth-hungry applications like VoIP and PC-based videoconferencing.

Initially, 10-Gigabit Ethernet will be used for providing high-speed connections between large-capacity switches on the LAN backbone, aggregating or transporting huge flows of Gigabit Ethernet traffic coming from the increasingly gig-attached server farms. Broadband-gulping enterprise applications and the growth of the residential broadband market (via DSL and cable modem) have led to skyrocketing demand for broadband in the MAN. Pioneer Consulting (Cambridge, MA) expects the metropolitan optical IP market to grow from an expected $110 million in 2000 to $1.08 billion by 2004.

There are two migration paths for the MAN. The simplest belongs to the greenfield ventures, which lease dark fiber and build their own networks from scratch, completely bypassing pre-existing SONET/SDH and ATM infrastructures. With Layer 3 switches, these 10-Gigabit Ethernet greenfield operations will enjoy several advantages right out of the gate:

The other more complex migration path is for pre-existing SONET-based networks that require more bandwidth for data traffic. Theirs will be a staged migration.

The first step will entail encapsulating Ethernet within a SONET wrapper for end-to-end communications via dark fiber or dark wavelengths over a DWDM system-not because it is necessary but because these network managers are already using SONET infrastructure. The second step of the migration for pre-existing networks, however, is to run native 10-Gigabit Ethernet over all-optical networks. With tens of thousands of fibers being laid in the trenches, it is a simple matter to light up a different fiber for each bit stream, with separate fibers for voice, text, and video.

In fact, the network performance advantage swings firmly into Ethernet's corner with the introduction of 10-Gigabit Ethernet. While OC-192 (10 Gbits/sec) is the fastest flavor of SONET, OC-48 (2.5 Gbits/sec) is still the dominant version outside of the primary backbone network. That means long-haul carriers continuing to build out their networks can gain both cost and performance advantages by working directly with 10-Gigabit Ethernet, providing more efficient and less costly connections between carrier-class switches and routers. Ultimately, WAN managers are simply going to strip out the SONET and packet-over-SONET layers and run Ethernet directly over the fiber.

Ethernet's simplicity of design and operation has caused the technology to be thoroughly embraced as the foundation for LANs. The fact that Ethernet has managed to avoid becoming much more complex throughout its evolution has only strengthened its appeal. Its relentless adherence to open standards, as established by the IEEE, has accelerated Ethernet's acceptance by supporting full interoperability and a variety of migration paths (see Figure).

The eventual rollout of 10-Gigabit Ethernet will profit not only from this constancy of design and mechanics, but also from the continual innovation that has allowed Ethernet to overcome its limitations without fundamentally changing it. This technology, after all, started out as a shared media, running at 10 Mbits/sec over coaxial cable. To overcome the deficiencies of being a shared media, it evolved into a hubbed 10-Mbit/sec network running over copper wire. To ramp up its speed, it then developed into a switched 100-Mbit/sec network. Then came Gigabit Ethernet to provide still higher speeds.

Now, 10-Gigabit Ethernet promises to extend those benefits further into the MAN and out into the WAN environment-and not a moment too soon. Internet traffic is increasing by an order of magnitude every year. Yet, the cost and complexity of building out the backbone to keep up with the runaway demand for bandwidth has resulted in network architecture and business models of equal vulnerability.

With 10-Gigabit Ethernet, however, carriers and service providers now have a technology that not only offers extraordinary scalability and ease of provisioning, but also has the ability to interoperate with existing SONET-based networks at OC-192 rates. In addition, Ethernet throughout the network provides the first platform for unifying LAN, MAN, and WAN over open standards for unprecedented performance.