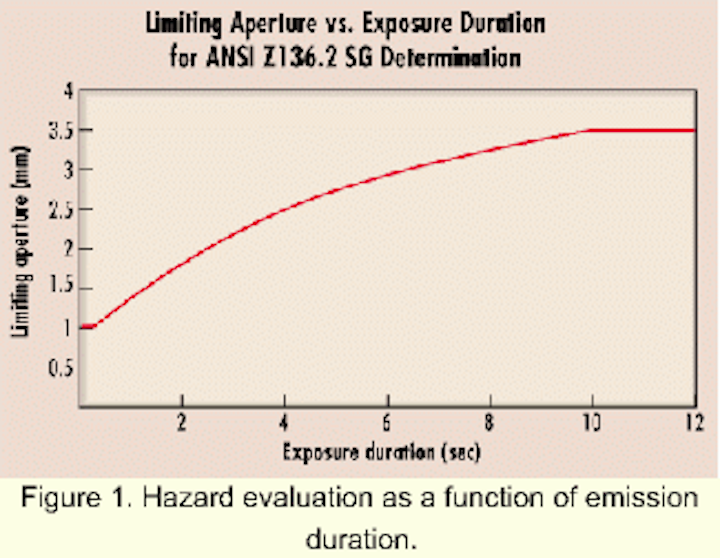 With transmission powers and the number of wavelengths increasing, the difficulty of operating optical-networking systems safely becomes significantly more complex.

As the deployment of all-optical DWDM networks quickly evolves, the possibility of personnel being exposed to harmful amounts of radiation increases, unless user organizations establish adequate protection and controls. This is not only due to increases in the output powers of C-band (1,530-1,560 nm) erbium-doped fiber amplifiers (EDFAs), but also due to the commercial availability of L-band (1,570-1,610 nm) EDFAs and Raman amplifiers (RAs) operating over the entire EDFA bandwidth. With the advent of bi-directional systems and amplifiers in the S+ (1,450-1,480 nm) and S (1,480-1,530 nm) bands, personnel will not only have to be concerned with high optical powers, but also with the fact that emissions can (1) be over a wide range of wavelengths and (2) originate from both directions. 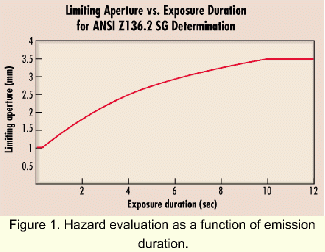 Figure 1. Hazard evaluation as a function of emission duration.

Commercial DWDM systems and network configurations have evolved to operating powers well beyond 17 dBm. In accordance with the American National Standards Institute (ANSI) Z136.2 and the International Electrotechnical Commission (IEC) 60825-2 standards, if these systems do not have an automatic power reduction/ automatic shutdown (APR/ASD) feature, the user organization will have to implement numerous costly programs such as a designated laser safety person, extensive safety training, eye examinations, and administrative programs. These requirements are well beyond general laser safety training, labeling, and the usage of eye protection when viewing emissions with a microscope or eye-loupe.1, 2

Let's look at the current laser safety standards with respect to high-powered DWDM systems, user organization responsibilities, and suggestions to ensure a safe working environment. Note that even though we focus solely on 1,550-nm emissions, due to the usage of EDFAs and RAs in this wavelength region, the same safety principles will apply to 1,310-nm systems, but at lower power levels.

ANSI publishes the standards that are followed by the U.S. Food and Drug Administration and that are, in turn, followed by the Occupational Safety and Health Administration and other legal entities in the United States. In accordance with the ANSI Z136.2-1997 document ("American National Standard for Safe Use of Optical Fiber Communications Systems Utilizing Laser Diode and LED Sources"), the following are the definitions for the Service Group (SG) classifications for optical-fiber communication systems (OFCSs).1 Note that laser module emissions are classified as an ANSI Class 1, Class 2, Class 3a, Class 3b, or Class 4, if it is within the accessible emission limits (AELs).

SG1: The total output power of the OFCS is less than the AEL for Class 1 and there is no risk of exceeding the maximum permissible exposure (MPE) (ANSI Z136.2) when viewing the end of a fiber or connector with a microscope, an eye-loupe, or with the unaided eye. Thus, the system is not considered to be hazardous with or without eye aides.

SG2: An OFCS that emits energy at wavelengths between 400- and 700-nm and is potentially hazardous when it is viewed for more than 0.25 sec with the unaided eye.

SG3b: An OFCS that may be hazardous when viewed with the aided and unaided eye, but its scattered radiation and diffuse reflections are not considered hazardous.

SG4: An OFCS in which direct and indirect viewing is considered hazardous. 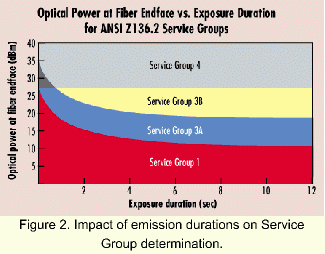 Note that these figures assume a viewing duration of >10 sec. If the time duration is less, then the heating spot formed on the eye is smaller. Thus, the amount of power from the fiber end can be greater. The ANSI Z136.2 standard accounts for this by varying the "affected spot" or limiting aperture (d0) for hazard evaluation as a function of emission duration. This relationship for the 1,400- to 2,600-nm region is shown in Figure 1 and Table 2.

The impact of these durations on SG determination is shown in Figure 2. From this graph, it is evident that any optical emissions >27 dBm (500 mW) are in SG4, regardless of the APR/ASD "reaction time." If an OFCS can perform an APR/ASD function within 0.1 sec, it can be classified as an SG1 system up to the >27-dBm power level. However, if the APR/ASD function fails, then the equipment can be within the SG3b category if the power level is between 18 and 27 dBm. In this case, emissions may be harmful to the eye.

From the IEC 60825-2, "Safety of laser products, Part 2: Safety of optical fibre communication systems" (4.4.1), the "Hazard Level" is defined as "The potential hazard at any accessible location within an optical-fiber communication system. It is based on the level of optical radiation which could become accessible in reasonably foreseeable circumstances, e.g., a fiber cable break. The methods for determination of compliance with the specified radiation limit values are the same as those described for classification in the IEC 60825-1."3 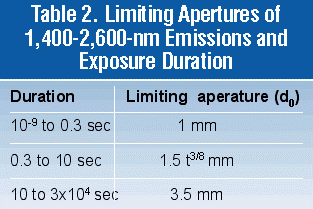 The IEC 80625-2, Amendment 1 mentions that Hazard Level evaluation may be different from the IEC 80625-1 classification.2 This may be due to:

1. The IEC 60825-2 standard also has a "k x 3a Hazard Level" that is in between the 3a and 3b levels. "For purposes of the k x 3a Hazard Level evaluation, Class 3a AEL table is used and the minimum measurement distance shall be increased to 250 mm (25 cm) from the apparent source and the time base used shall be 10 sec, provided longer viewing durations are not reasonably foreseeable." Note that for other hazard assessments, the distance is 100 mm (10 cm).

Note that the Hazard Levels are slightly lower or the same as the AELs of the ANSI service groups, with the addition of the k x 3a Hazard Level.

In Amendment 1 (D.5.3.2) for connectorized systems, it is assumed that "human accessibility to the energized fiber would not occur until 1 sec after the disconnection. As a result, the power- reduction duration specified would be increased by 1 sec for this application."2 This enables the power limit for the Hazard Level to be increased in a similar manner as indicated in Figure 2 for the ANSI Z136.2 standard. 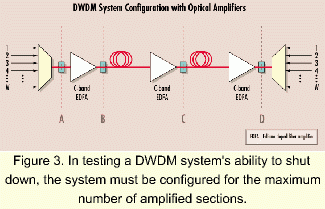 Figure 3. In testing a DWDM system's ability to shut down, the system must be configured for the maximum number of amplified sections.

An extensive reliability analysis on the APR circuitry is given in Amendment 1; however, it is mentioned that, "No system is 100% fail-safe since there is always a nonzero probability that failures will occur." Amendment 1 also mentions that "a circuit design with less than 500 FITs is achievable, which translates to an occupational risk of less than 5 HITs, which the U.K. health and safety executive considers an occupational risk of less than 5.43 HITs for accidents to be 'trivial.'"2

The ANSI and IEC standards enable manufacturers to use an ASD or APR mechanism to reduce the hazard level, since eye injury is dependent on the radiation-exposure duration. Thus, high-powered DWDM systems (>17 dBm) may be designated as be ing within the ANSI SG1 or 3a/IEC Hazard Level 1 or 3a categories even though their operating powers are significantly higher. All of the standards emphasize that the user organization is responsible for the potential safety hazard, including the reliability of the APR/ASD mechanisms and implications if the APR/ASD system can be manually or remotely overridden.

For DWDM systems operating at powers >17 dBm, the following items are suggested features and practices for a safe work environment:

For DWDM products operating at >17 dBm, most vendors use some form of APR/ASD. However, they have slightly different ways of implementing these safety mechanisms. The DWDM system should automatically reduce power or shut down if the input power to an optical amplifier is too low or a fiber breaks or is cut or if a connector is disconnected.

Some methods used to determine the presence of these scenarios are:

In testing the ability of the DWDM system to automatically shut or power down, it is necessary to configure the system for the maximum number of amplified sections (see Figure 3). Next, insert the test configuration in Figure 4 around the section to be tested. Simulate a failure by decreasing the input power to the section under test with an attenuator. Do not simply disconnect a connector to simulate a failure. Monitor the input and output power levels of the failed section on an oscilloscope. 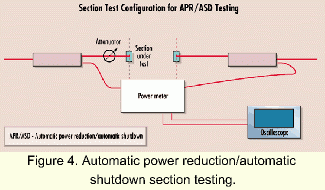 The input power level that triggers the APR/ASD, the output power level before, during, and after the APR/ASD; and the reaction time of the system are measured. Since all equipment vendors use different methods of detecting scenarios that require APR/ASD, it is necessary to perform this testing near both end-terminal locations (sections AB and CD) and at least one optical amplifier site (section BC).

The precise methods in computing the actual hazard before, during, and after the APR/ASD procedure are described in ANSI Z136.2 and IEC 60825-2. Note that the current ANSI Z136.2 requirements are shown in Figure 2 for a 1,550-nm emission from an 11-micron fiber, for quick reference.

Next, a test of the operation of the APR/ASD feature when associated card units are removed (instead of attenuating the power) should be performed in the same manner as discussed previously.

As networks evolve to include high-powered C-band, L-band, and Raman amplifier-based products, the optical power level per fiber increases. This in turn increases the need for precautions to be taken to ensure a safe work environment for installation, operations, and maintenance personnel.

To maintain this safe working environment, network operators must use multiple features and precautions, such as APR/ASD, interlocks, safety connectors, etc. Also, it is important that the performance and reliability of these network features be checked for user-specific deployment scenarios. If a network is unable to reduce power or shut down quick enough, then potentially hazardous emission levels may be present.

Beth Koelbl currently consults for NuLight Optics (Fairfax Station, VA). She can be reached at nulight@att.net or http://home. att.net/~nulight. Curtis Hill is a senior specialist for Bell Atlantic. Jeff Youdes is a corporate manager of new technology introduction for Southwestern Bell Corp.

Thanks to the National Telecommunications Alliance, Doug Teller of Bell South, Booker Tyrone and Bernie Cross of Southwestern Bell, and Jason Ackerman of US West for their invaluable inputs.