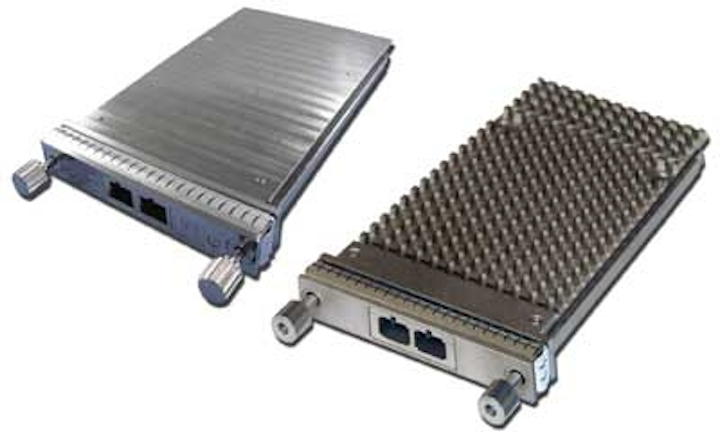 The IEEE 802.3bg Task Force is currently defining a serial 40-Gigabit Ethernet technology that will be optically compatible with the carriers’ installed base of 40-Gbps client interfaces and enable the development of a common tri-rate module.

THE DEVELOPMENT of an Ethernet standard at 40 Gbps was somewhat controversial when it was originally added to the IEEE 802.3ba Ethernet standards activities. Conventional wisdom stated that its application would be limited to rack-to-rack and shelf-to-shelf applications in data centers, and the carrier community, bullish on 100-Gigabit Ethernet, was reluctant to embrace the slower speed.

Fast forward several years, and the carriers are looking at 40-Gigabit Ethernet (40GbE) with renewed interest as an interconnection between their transport networks or as an uplink interconnection from enterprise networks, data centers, and other network operators into their transport networks. In fact, the new, swiftly moving IEEE 802.3bg 40-Gbps Ethernet singlemode fiber PMD task force is hard at work defining a serial 40GbE standard ailored specifically for the carriers’ needs.

“We’re seeing [40GbE] as sort of coming after 100 Gig, more as a backfill,” reports Mark Nowell, senior director of engineering at Cisco and chair of the IEEE 802.3bg task force. “The data centers and the enterprises are starting to look for uplinks into [carrier] networks. The carriers are very aware of 40-Gigabit Ethernet, and they want to be prepared for it when it comes. But they have also been very consistent over the last number of years that their main interest and focus has been 100 Gig.”

Nevertheless, the members of the IEEE 802.3bg task force are committed to a serial 40GbE implementation and working diligently to get the standard ratified in record time. Barring any major hurdles, the standard should be completed in June 2011, a mere 18 months after the original call for interest (CFI) in November 2009.

It is this third objective—optical compatibility—that ultimately led to the formation of the IEEE 802.3bg project, which will be published as an amendment to the 802.3ba Ethernet standard.

Because 40GbE was originally perceived as a data center/enterprise technology, the 802.3ba Ethernet standard reflects the particular needs of that market, which is and always has been very cost sensitive. Though the group ultimately settled on a 4x10-Gbps CWDM implementation (known as 40GBase-LR4) that leverages lower-cost 10-Gbps components, a contingent of members, Cisco among them, pushed for a serial implementation as well. Their rationale was simple: For 40-Gigabit Ethernet to penetrate carrier transport networks, it must easily interface with their existing 40-Gbps SONET/SDH and OTN infrastructures.

“There was a lot of passionate discussion around price curves and how a single laser is always going to be cheaper than four lasers, and while CWDM may be cheaper, there could be some crossover point in the future,” Nowell recalls. “But what happened in the end was the [802.3ba] 40GbE group chose to go with CWDM as their main proposal, and that’s what came to be.”

As it is currently defined in the IEEE 802.3ba Ethernet standard, 40GBase-LR4 is optically incompatible with the carriers’ installed base of 40-Gbps client interfaces, which includes the OC-768/STM-256, 40-Gbps packetover-SONET (POS), and Optical Transport Network OTU3 protocols.

To minimize costs, carriers have deployed dual-rate or dual-protocol OTU3/OC-768 modules that are software selectable, enabling them to use one module for multiple applications. Both OTU3 and OC-768 are based on a 40-Gbps NRZ modulation format, and their optical specifications are nearly equivalent. Now carriers would like to add 40GbE to the mix. But the CWDM variance defined by the 802.3ba standard prevents the development of a so-called common tri-rate module.

In a presentation entitled “Economic Feasibility,” delivered in January during the group’s interim meeting, representatives from AT&T, Verizon, NTT, et al., noted, “Carrier opex is proportional to the number of module types that have to be supported.” The development of a common tri-rate module would reduce sparring and simplify inventory management, thus lowering overall operating expenses.

Existing modules for 40G are housed in the 300-pin form factor and support the ITU specifications for SONET/SDH and OTN. Explains Jon Anderson, director of technology programs at Opnext, “For an Ethernet rate, which is 41.25 Gig, basically, the idea is to have that rate supported in the existing 300-pin 40G transceiver and have it be [software] selectable so the operator can select the [SONET/]SDH rate, the OTN rate, or the Ethernet rate using the same piece of hardware.”

Anderson believes the first tri-rate modules should appear in late 2011/early 2012. The hardware effectively exists today, but testing the devices remains an obstacle. “It’s a question of when the specs will be completely solid and made available on test equipment, and then made available to module vendors like ourselves to use for testing the devices,” he says. “I suspect that will probably occur sometime mid-next year.”

By all accounts, the 802.3bg task force is moving swiftly to completion, in part because they are able to leverage work already done by the ITU and the 802.3ba task force. “We delayed the start of this project waiting for the 802.3ba group to finish what it was doing,” says Nowell, “and that gave us a period of time to do a lot of incubation work, to get the proposals hashed out.”

Of course, that doesn’t mean all decisions have been unanimous. In a task force meeting held May 26–27, 2010, in Geneva, the group resolved the key technical challenge of selecting a wavelength operating range for the transmitter (1550 nm), but not without a fair amount of debate.

According to Anderson, who was also a presenter at the task force meeting, the discussion often seemed to fall along geographic lines, with several North American representatives favoring the 1550-nm operating range, while several Asian representatives lobbied for a 1310-nm option.

In the end, the group decided backwards compatibility was its most important criteria. But, says Anderson, “It was an exciting time. Some of the Asian suppliers and some of the Asian carriers—China Telecom in particular—who were looking for a 1310-nm solution for their networks may still have some interest in pursuing a standard in this direction.”

So it seems the conventional wisdom—that 40GbE technology would be limited to computing and network storage applications—will not hold after all. With the ratification of the IEEE 802.3bg amendment, suppliers will be able to develop a common tri-rate module that should drive 40GbE penetration in carrier transport networks.

“As with anything,” says John d’Ambrosia, director of Ethernet based standards at Force10 Networks and chair of the IEEE 802.3ba Ethernet task force, “the market will decide where it’s going to use [40GbE] and where it makes sense to use it. Do I believe that 40 Gig is going to have a home in servers? Yes. Do I believe that 40 Gig will have a home in networking? Yes.”