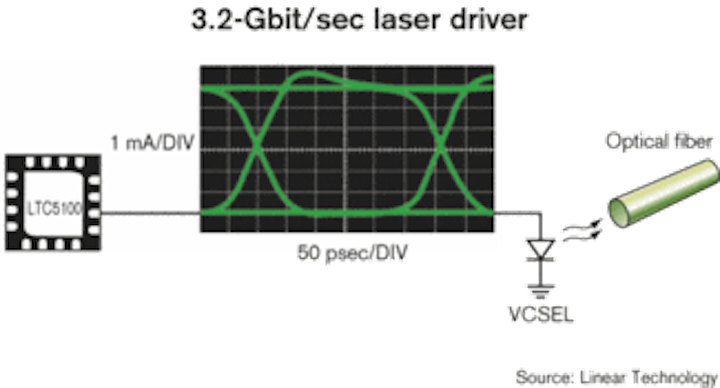 Gone are the days of screwdrivers and soldering irons, say the folks at Linear Technology (Milpitas, CA). With the release of the LTC5100 3.2-Gbit/sec VCSEL driver, the company has moved the laser driver out of the realm of manual control and into the digital era.

A laser driver serves two functions: It electronically drives the laser (and enables the electrical-to-optical signal conversion) and provides the necessary bias conditions for the laser to establish the proper operating state. Typically, a laser requires the application of both a dc bias current and high-speed ac signal current. 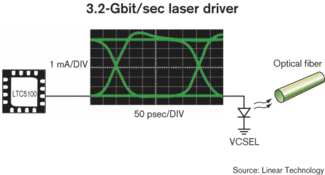 The LTC5100 VCSEL driver contains sophisticated analog and microwave design techniques that enable signal delivery in a very clean form, with minimal jitter and noise, according to Linear Technology.

Thanks to inconsistencies in the manufacturability of lasers, no two lasers are exactly alike; the amount of dc bias current and ac modulation current must be adjusted for each laser. Adjustments must be made for changes in temperature and environmental conditions as well. For traditional analog laser drivers, this adjustment occurs manually.

Linear's LTC5100 includes analog and digital components to provide what the company claims is unprecedented programmability. Unlike traditional analog devices, the 5100 features an onboard digital controller for standalone operation; integrated analog-to-digital and digital-to-analog converters provide continuous closed loop monitoring and control, driving the laser to the necessary optical power levels while compensating for variations like temperature drift.

The LTC5100 laser driver also can be controlled by an external microprocessor via a built-in I2C serial interface. Users can set the desired bias current, modulation current, laser power, peaking characteristics, and first- and second-order temperature coefficients for a particular laser diode, and the device will store this data in an external EEPROM. The user can also select one of two operating modes: automatic power control or constant current control.

"In the old paradigm, people had to fiddle with resistors, but our device is controlled digitally," explains Bob Swartz, general manager of Linear's High Frequency Business Unit. "That's a very significant difference."

Even more significant, the 5100 provides a two-way communications link. It features fault detection, a capability not found in a typical laser driver. The device detects various kinds of failures, including over-power, over-current, under-power, and under-voltage, and notifies the external controller that a fault has been detected. Moreover, "the 5100 can take certain kinds of action itself," adds Swartz, "including shutting down the laser and putting out an immediate fault signal if it feels that the laser has gone out of its normal operating bounds."

"From a system perspective," notes Linear product marketing manager James Wong, "the device incorporates so many integrated functions that the system engineer really ends up with a very compact solution, especially in a backplane type of environment where you have very-high-speed communications gear jammed into a very small cabinet or a very small package."

The LTC5100 is optimized for Gigabit Ethernet and Fibre Channel links, short-reach SONET links, and short-haul backplane interconnect systems. The device delivers 60-psec rise and fall times and 10-psec deterministic jitter. It operates from a single 3.3-V power supply and draws 5-mA of current when transmitting. Several manufacturers are currently working with the device and designing it into their systems, according to Swartz.

Linear hopes to tap into what appears to be an expanding market for VCSEL technology. In the past year, several laser manufacturers, including Infineon Technologies and Picolight, have introduced 1310-nm VCSELs suitable for intermediate links. When used with standard singlemode fiber, 1310-nm VCSELs can transmit between 2 and 10 km, making them appropriate for campus and local loop applications, a space now dominated by edge-emitting lasers.