by Mark Donovan and Keith Conroy

With new data and video applications driving massive increases in Internet traffic, service providers and telecom and datacom OEMs have been under pressure to provide lower cost-per-bit transmission services. Consequently, the extension of Ethernet directly over the MAN/WAN has become a major objective. However, achieving this objective is fraught with new technical challenges and compromises. The WAN-SONET/SDH environment is circuit-based and is extremely reliable, whereas the LAN/Ethernet environment is packet-based and best-effort reliable. The LAN/Ethernet environment has traditionally lacked the quality of service (QoS), protection, and management services found in the WAN-SONET/SDH environment. In addition, the LAN environment has non-deterministic latency issues that are relatively absent in the WAN environment.

For some time now, the low cost and simplicity of Ethernet have made it the protocol of choice in the enterprise, home, and mobile infrastructure for transporting IP data, voice, and video over LANs. Ethernetâ��s attractive cost structure is driving the technologyâ��s extension into next-generation MANs and WANs. There is strong evidence of growth of carrier-grade and metro Ethernet services over the last two years. The transformation is taking place over multiple network layers (PSTN, Frame Relay, ATM, IP) via SONET/SDH, as the transmission protocol over WDM networks migrates to a simplified IP/MPLS/Ethernet-based service platform using OTN for transmission over non-WDM or WDM optical networks. This transformation is resulting in a cost-effective architecture with high reliability and optical capacity. An example of the structure of this transformation is shown in Fig. 1.

To address the concerns of reliability, latency, and QoS, the Metro Ethernet Forum (MEF) and the IEEE 802 standards organization have been working to provide a set of standards for carrier-grade Ethernet services that offer many of the feature sets of SONET/SDH, but without the cost-per-bit transmission penalty. Key features are QoS and operations, administration, maintenance, and protection (OAM&P) capabilities that include performance monitoring and predictable performance; localization of faults (isolate and troubleshoot problems), defect detection, and reporting; and network availability and protection.

Although the work of the MEF and IEEE 802 is helpful, there are still technical issues that have yet to be resolved and that cannot be achieved only through data management protocol changes. One key issue involves the actual optical transport of Ethernet frames directly over metro and long-haul distances with multiple huts.

When traditional WDM equipment is merged with Ethernet equipment, optical noise and signal impairments become a significant problem in the transporting of Ethernet frames directly over optical lambdas. These impairments include

These optical impairments need to be addressed for a Carrier Ethernet network to be effectively deployed.

The ideal approach for providing Carrier Ethernet services is to employ the OTN framing structure around the Ethernet frame prior to transporting it over an optical link. This technique mitigates the optical impairments issue and addresses the OAM&P requirements. The OTN framing structure, defined by ITU-G.872, G.709, and G.795 specifications, includes FEC technology along with EDC that can attenuate the optical impairments sufficiently to enable the Ethernet traffic to be transported over metro and long-haul optical distances.

In addition, the OTN framing structure is a narrowed-down version of the SONET/SDH protocol that can enable a cost-effective deployment of next-generation data services with many of the same QoS, management, and protection features of SONET/SDH. OTN also has several advantages over SONET/SDH-based transport services, including the following:

The ITU standard allows for two kinds of FEC code used at the 7% channel expansion rate. The standard FEC code, or GFEC code for G.709 FEC code, provides 6.2 dB of gain at 10-15 BER. The other 7% overhead code is a strong FEC code as defined by the standard. An enhanced FEC (EFEC) code fits in this standard definition and provides 8.6 dB of coding gain at 10-15 BER. 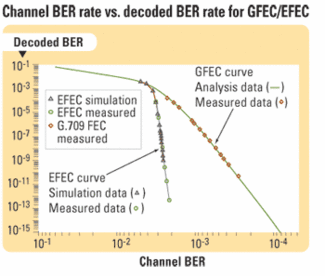 A key benefit of OTN FEC is that it provides increased gain to an optical transmission line. This translates into fewer huts or sub-connections required between a source and destination address. MANs/WANs have singlemode fiber transmission spans that can range up to 640 km and in some cases 1,000 km. In most of these spans, electronic regeneration is not used. The spans are broken into multiple 70- to 80-km links feeding into fiber huts that have dispersion compensated fibers (DCFs) to compensate for and mitigate CD, and EDFAs to amplify the optical signal before re-transmission. 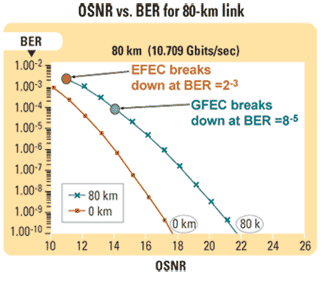 Figure 3 is an example of a graph showing OSNR versus BER for an 80-km link. The data was taken using a zero-chirp modulator running at 10.709 Gbits/sec. The receiver side used an avalanche photodiode with EDC circuitry. As shown in this graph, using GFEC would allow an OSNR link budget as low as 14 dB. For EFEC, the OSNR budget could go as low as 11 dB.

The advantages of FEC is one of the key benefits of using OTN for transporting Ethernet in a MAN/WAN. Without it, the OSNR link budget through multiple EFDA huts would need to stay above 23 to 24 dB OSNR to achieve a 10-12 BER. For fiber spans greater than 600 km that have PMD or additional optical noise, EFEC and EDC provide added margin in the link budget as Fig. 3 illustrates.

Finally, the integrated ITU GFEC and EFEC not only help overcome CD and PMD. They also compensate for nonlinear inter-channel impairments such as cross-phase modulation (XPM) and four-wave mixing (FWM), which allows for a narrow channel spacing of 25 GHz for DWDM systems.

OTN with FEC and EFEC functionality is relatively straight forward to implement. By front-ending an OTN framing function with FEC or EFEC support onto a traditional 10GbE physical layer integrated circuit, a metro Ethernet platform, such as an edge switch router, could directly interface to an optical metro network. The IC could be designed to bolt seamlessly to a MAC, network processor, or switch fabric device.

Ideally, this IC is a 10GbE mapper device with a rich suite of integrated 10GbE-to-OTU2 mapping modes, EDC, FEC, and XAUI and serial 10-Gbit/sec interfaces. These features enable a cost-effective implementation of metro Ethernet for optically based metro and long-haul transport networks. Designers looking to build systems based on this technology require a device that enables the direct connection between 10-Gbit/sec MACs and XFP/SFP+ optical modules as seen in Fig. 4. Optimizing a system for the cost-effective migration to these services will require a single device to take the place of up to three devices: a FEC/framer/mapper device, an SFI4.1 to serial 10-Gbit/sec physical layer device, and a bridge device to connect the MAC to the FEC/framer/mapper device.

A 10GbE mapper is ideally suited for metro Ethernet switch/router and DWDM systems only if it supports pure 10GbE LAN metro Ethernet networks as well as WAN and OTN networks via a set of 10GbE over WAN and OTN mapping modes. With an integrated serial 10-Gbit/sec PHY XFI/SFI interface and provisional G.709 GFEC/EFEC features, the device will provide a seamless interface to XFP and SFP+ optical modules. These devices should be specifically designed for carrier-grade metro Ethernet switch/router cards, OTU2 DWDM client tributary and line cards, and 10GbE/OC-192/STM-64 multi-service provisioning platform client tributary and line cards. 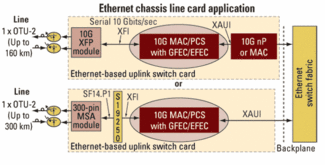 With an integrated FRACn synthesizer, a single low-cost external oscillator is all that is required for a 10GbE mapper device to support 10-Gbit/sec line rates from 9.954 Gbits/sec up to 11.32 Gbits/sec, while meeting SONET/SDH and OTN jitter requirements. This device should also support loop timing for SONET/SDH, OTH, and Synchronous Ethernet applications. In addition to this timing flexibility, the device should support a variety of 10GbE mapping modes, such as bit-transparent mapping, GFP mapping, WIS framing, and 10GbE LAN pass-thru mode.

The ability to support loop timing (bits timing) is a fundamental requirement of Synchronous Ethernet. A 10GbE mapper device can support Synchronous Ethernet applications by providing a demapped clock signal from the line receive OTN signal. This demapped clock signal represents the native 10GbE clock signal that was transmitted over the line OTN interface. This clock signal can then be used to feed a common timing card that can generate a TX reference clock to feed both the receive system interface and the line transmit interface, effectively providing loop timing based on the received native 10GbE signal.

By employing OTN with FEC and EDC technology into next-generation metro Ethernet equipment, large capital and operating cost savings can be realized. Besides the cost per bit transmission savings by maintaining Ethernet throughout the LAN/MAN/WAN infrastructure, edge WDM equipment could be outright eliminated in many cases, as future metro Ethernet boxes could connect directly to metro and long-haul WDM networks. In addition, fewer huts would be required for transporting Ethernet over metro or long-haul networks, which would save both equipment and maintenance costs.

The integration of OTNâ��s FEC and EDC technologies into 10GbE mapper devices offers the potential for greatly improving the cost-effective deployment of next-generation data services and transport technologies such as metro and Carrier Ethernet.