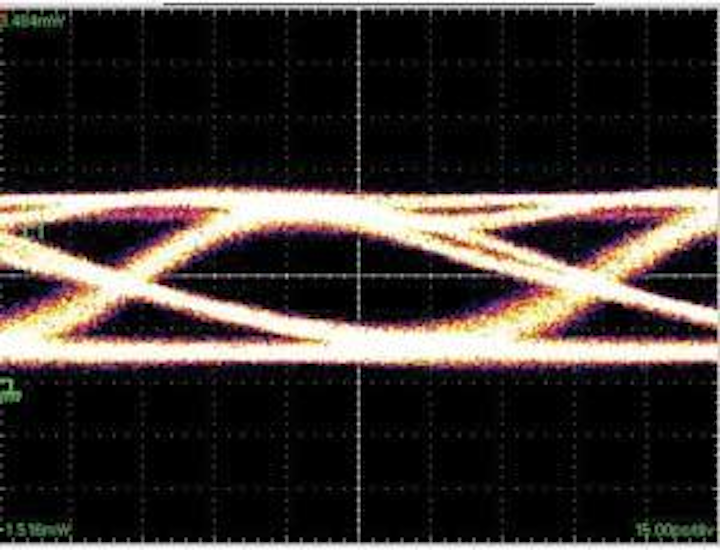 Although 2.5-Gbit/sec and 1/2/4-Gbit/sec optical communications devices have been readily deployed in harsh thermal environments (-20°C to +85°C is common), 10-Gbit/sec technology has lagged behind. The demand for operation over an extended temperature range at this higher speed is clear. The density of line cards has increased to 80 Gbits/sec, and 10-Gbit/sec line rates are being deployed closer to the local access point where controlled conditions are not always available. In addition, the adoption of new pluggable transceiver multisource agreements (MSAs) such as XFP poses more stringent thermal environments. 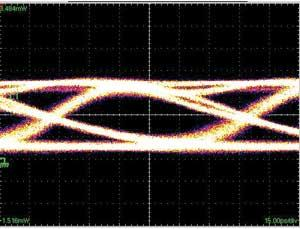 Figure 1. The eye diagram of a typical 10-Gbit/sec DML shows the asymmetry inherent in the laser�s rise and fall times. This asymmetry varies with temperature.

These three factors demand that physical-layer component vendors develop 10-Gbit/sec devices with extended temperature performance. However, the right combination of technology to meet both environmental and data-rate requirements has only recently appeared.

Directly modulated lasers (DMLs) have been the component of choice for uncooled 1310-nm performance in short-reach (10 km) applications over singlemode fiber. Distributed feedback (DFB) configurations have been particularly popular. These lasers have enjoyed success in this application for some time, particularly for 10-Gigabit Ethernet.

However, DMLs face challenges when pushed to extended temperature ranges or to SONET performance. As with every DML, the light-to-current transfer curve (L-I curve) changes over temperature and time. This effect is compounded by the asymmetry of the laser.

Figure 1 shows the difference in the rise time versus the fall time. Again, this asymmetry changes over temperature. The most common method to compensate for these effects is the use of a lookup table filled with data from characterizations across multiple laser and temperature production tests.

Another way to combat these laser efficiency and asymmetry issues is to leave the laser on all the time and incorporate an external modulator, a configuration otherwise known as an externally modulated laser (EML). In this case, an EML based on an electroabsorption (EA) modulator is the best fit for both its size and modulation drive requirements. The EML, whose RF performance is dictated by fast absorption in the EA section and not by the dynamic characteristics of a laser, delivers robust RF performance that is independent of the operating temperature.

Traditionally, EMLs have been used for 1550-nm applications with distances of 40 km or longer, where the EA modulator operation is optimized to exhibit low or negative chirp and consequently follows a linear extinction curve for small voltages. DMLs also exhibit a linear behavior in which the modulation current operates on the L-I curve. Care of the modulation range is also a concern because DMLs experience adverse lasing effects when the “0” level is close to the lasing threshold. For both cases, these linear electro-optical transfer functions require stringent RF design on the entire RF path from the driver to the device. The end result is that the design must maintain strict control of the modulation amplitude to maintain proper output performance.

The introduction of the uncooled 1310-nm EML has changed this. The design of one such transmitter features the two optical functions of lasing and modulation integrated in separate, vertically coupled waveguide elements. By vertically coupling these elements, each can be independently optimized for uncooled operation without the costly regrowth steps normally seen in EML fabrication. The DFB laser element is aluminum-based to generate excellent power during uncooled operation. The EA is designed to have an inverted S-shaped transfer curve, which is considerably different from the linear curves described above. The EA design can now be driven into saturation because it operates in a limiting nature at both the optical “1” and optical “0” level.

The advantage of the limiting EA modulation curve is that it allows the uncooled 1310-nm EML to operate over the entire temperature range with consistent performance in an open-loop configuration (see Figure 2). The result is that the RF output swing of the modulator driver does not need to be adjusted over temperature or life to guarantee the desired optical extinction ratios (ERs). This simplifies the characterization and manufacturing test of modules using these uncooled EML TOSAs to DC-level testing, since the RF settings are not dependent on temperature and life.

The ER obtained is also significantly greater than the 6-dB specification for SONET links, enabling the module manufacturer to assemble a transmit chain that can be used for both 10-Gigabit Ethernet and SONET/SDH applications. Given that power dissipation is always a concern, the module manufacturer can also take advantage of an uncooled EML characteristic in which the ER actually increases with temperature, so a lower RF swing can be used at high temperatures to reduce power dissipation. 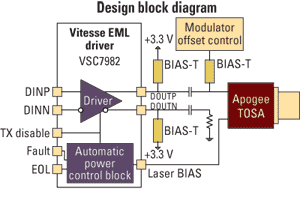 Figure 3. This block diagram, based on a reference design that features Vitesse's VSC7982 EML driver and Apogee Photonics' 10T3081 extended-temperature 1310-nm uncooled EML TOSA, offers an example of a design that will fit XFP and similar small form factors.

For 10-km 1310-nm applications, in particular the 10GBase-LR and OC-192 SR1 specifications, the uncooled 1310-nm EML TOSA design is less complex because of the open-loop modulation control; it also offers improved performance. The use of an uncooled 1310-nm EML also enables deployment of a similar transmitter technology at longer-reach 1550-nm applications, which allows the designer to leverage one modulator driver across multiple designs.

The right choice of modulator driver for this application can further reduce the design effort and time-to-market of the module. Given that the laser’s average power output will still vary over temperature, the uncooled 1310-nm EML will require the same DC control loop that is used with DML designs. However, most drivers to date only incorporate the RF modulation function, thus requiring external components to support the DC control loop for the laser and the eye-safety requirements. While these circuits are simple, many module manufacturers are having problems fitting their older designs into small form factors such as XFP due to the large number of external support circuits.

To address this problem, a modulator driver with an integrated automatic power control (APC) loop is required. This feature reduces component count, resulting in a footprint that fits all of the commercially available 10-Gbit/sec module form factors. The integration of the point fault safety and laser control timing required for these applications further reduces chip count and footprint.

As mentioned previously, the uncooled EML operates in an open loop with a constant modulation amplitude, which requires a modulator driver with excellent RF swing stability over temperature, supply voltage, and data rate. Such performance can be achieved with careful setting of the control voltage with a simple resistor divider. As a result, the designer can be assured of having enough output swing at all the corners, thus reducing the characterization effort and number of production tests.

Figure 3 illustrates the layout of a 1310-nm uncooled EML with its associated modulator driver electronics. The illustration is based on a commercially available reference design. With increasing time-to-market concerns, cost pressures, and workforce reductions over the past five years, more design teams are relying on reference designs to prove out components before they integrate them into their own designs. These reference designs usually come with the full schematics and layout for the board design, including the laser driver and TOSA controls that interface to a microcontroller, as well as the critical design of the RF interface from the driver to the TOSA flex circuit. Three-dimensional modeling of the RF interface is critical to ensure proper match to the flex circuit. A properly constructed reference design combined with test data allow designers to start from a point of confidence and quickly move directly from a lab evaluation to an end-product design for 10-Gbit/sec module form factors, including XFP, X2, XENPAK, and 300-pin.

Optical data eyes for SONET/SDH OC-192 data rate (as shown in Figure 4) and 10GBase-LR (as shown in Figure 2) clearly show the benefits of the proper RF match of the components as well as the bandwidth independence of the electrical and optical components, with performance well within specification.

The highest volume requirement for singlemode-fiber optical modules continues to be for 10-km applications. The fact that system designers are pushing line-card densities up to reduce cost and carriers are driving 10-Gbit/sec links outside of the central office have driven the need for components with robust thermal behavior for temperature ranges larger than 0°C to 70°C. This is a natural progression of the industry and will become more important in the coming years, just as it was for the 2.5-Gbit/sec suppliers in the 1990s. The technology necessary to develop such modules is now available, paving the way for module designers to meet this burgeoning need.