The next generation of coherent interfaces, including both DSPs and optics, will offer significant improvements in performance, density, and power, and will have the flexibility for optimization so that both Metro-Telecom and Metro-DCI operators can increase their capacity while driving down cost/bit. 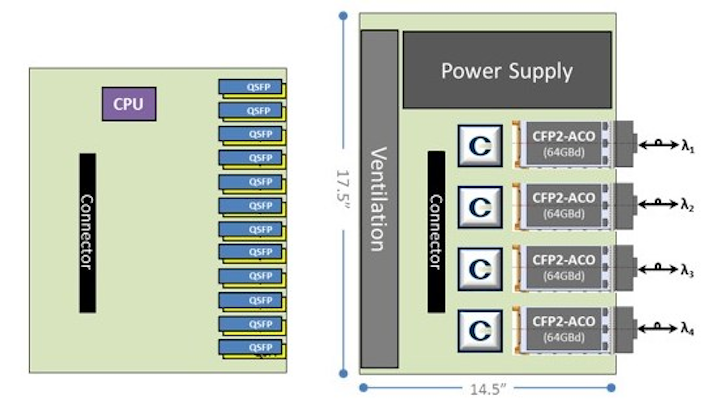 Coherent technology has completely transformed optical transmission since its introduction in 2009 and has enabled a widespread upgrade of DWDM networks to speeds of 100 Gbps (100G) per wavelength. To date most coherent deployment has occurred in long-haul and submarine networks, but in the coming years, metro networks will compose the dominant segment of a surging coherent market. IHS Infonetics Research predicts that metro coherent deployments will grow from 36% of the total in 2016 to 58% of the total in 2019, over which time the overall market will grow from 170,000 ports to 720,000 ports.1

This surge has come because operators must track exponential growth of nearly 25% per year in total IP traffic and over 50% per year in mobile data, according to the Cisco Virtual Networking Index, on relatively fixed capex and opex budgets. These factors require operators to dramatically reduce their cost per bit per second (simply, cost/bit) of data transport, and next-generation coherent technologies will help make that happen. As an example, Verizon has announced a massive upgrade of its metro network based on coherent and ROADM technology.

There are many elements that drive the total cost (both capex and opex) of transport in a metro DWDM network. Figure 1 shows these elements in a generic configuration:

The relative impact of these elements varies according to the type of network, and each operator must optimize cost in a way that best serves its network architecture and applications, as we will see later in this article.

Coherent modulation drives down cost/bit because of its spectral efficiency and management simplicity. Much of the cost of a network (fiber, line systems, facilities, management system) is fixed and largely independent of data rate; therefore, the higher the data rate, the lower the cost/bit. Over the past several years, the industry has taken advantage of this dynamic by upgrading long-haul networks from 10G direct detect to 100G coherent transmission, achieving a 10X increase in capacity on the same 50-GHz DWDM physical plant and driving down cost/bit accordingly.

Future advances in coherent transmission will reduce cost further, particularly in metro networks where there are opportunities to optimize the tradeoff between spectral efficiency and reach. These advances include:

As the volume of coherent deployment increases dramatically in the coming years, manufacturing economies of scale in both coherent DSPs and optics will further reduce cost. Coherent will become the universal transmission technology for DWDM networks of all reaches, overwhelming niche direct-detect technologies such as PAM4 or discrete multitone (DMT) with its performance, cost, flexibility, and ubiquity. In metro networks, the architecture will determine how best to take advantage of the benefits of coherent.

While metro networks around the world take various forms, we can divide them into two primary types: Metro-Telecom and Metro-DCI (data center interconnect).

Metro-Telecom is the traditional metro architecture incumbent telecommunications carriers such as Verizon and AT&T use. The next-generation coherent Metro-Telecom network will leverage a highly configurable mesh ROADM architecture in which wavelengths can be routed from point A to point B over multiple ROADM hops and fiber segments.

Figure 2 shows an example. Because of the optical loss and re-amplification inherent in a ROADM, this architecture places a premium on the optical signal-to-noise ratio (OSNR) performance of the coherent link. (The better the OSNR performance, the more ROADMs can be traversed by a wavelength without regeneration.) Furthermore, the facility component of the cost equation is paramount — coherent terminal equipment often resides in huts and other real estate with constrained space and power resources. Finally, to enable maximum flexibility in routing through the mesh, the channel grid should be fixed, either across the C-Band (e.g., 88 channels at 50-GHz spacing) or in segments (e.g., 44 channels at 50-GHz spacing and 22 channels at 100-GHz spacing).

These characteristics suggest a reconfigurable coherent solution based on ultra-high density, low-power 100G QPSK transmission. Such an approach provides the best OSNR characteristics and supports the most ROADM hops, with the option for 200G 16QAM to enable higher capacity over routes with fewer hops.

The advent of CFP4-ACO modules will enable line cards with 16 DWDM ports (or even 32, in a belly-to-belly configuration populating both sides of the card) and densities of up to 3.2 Tbps (or 6.4 Tbps). Figure 3 shows the front end of such a card; in actual use the wavelengths would be a mix of 100G and 200G. These densities can only be achieved with a next-generation coherent DSP and optics that drive power to well below 10 W per 100G.

An important aspect of next-generation Metro-Telecom networks will be interoperability, i.e., the capability for line interfaces from different vendors to communicate with each other (see for example, www.openroadm.org). While interoperability will be limited to shorter-reach connections (because the standard hard-decision forward error correction has lower coding gain than proprietary soft-decision alternatives), when combined with pluggable CFP2-ACO modules it will drive significant economies of scale and cost reduction for operators. Next-generation coherent DSPs will be able to switch (via software command) between interoperable and higher performing non-interoperable transmission modes.

Meanwhile, the Metro-DCI network has grown out of a new breed of carrier, the webscale operator. Think Microsoft, Google, Facebook, and more — these are companies with a worldwide network of data centers that deliver massive amounts of content to their customers. Webscale operators run global DWDM networks to interconnect these data centers, including both submarine and long-haul terrestrial links. But the majority of their traffic runs between data centers less than 100 km apart, typically in metro areas.

Figure 4 shows a Metro-DCI network, which differs from the Metro-Telecom architecture in many respects. First, the links are point-to-point, not mesh based, since routing is done at the IP layer within the data center, and the DWDM pipes simply connect one data center to another. Because of this, and the shorter distances typically involved, Metro-DCI links have a higher OSNR budget and hence can support higher-order modulation such as 64QAM. Webscale operators often lease their fiber, putting a premium on spectral efficiency and again emphasizing to a higher-order modulation approach. On the flip side, physical space may not be at as much of a premium, since modern data centers have huge scale and the space and power requirements of the DWDM equipment are dwarfed by those of the data center servers, switches, and routers.

The optimal next-generation coherent approach for Metro-DCI networks (in terms of minimizing total cost/bit) will leverage both high-order modulation (64QAM) and high symbol rate (64 GBaud). The high-order modulation maximizes fiber capacity (and thus minimizes the cost/bit of the fiber) to achieve more than 70 Tbps per fiber if both C and L bands are used. The high symbol rate reduces the component count and hence cost. The best implementations will contain "backoff" modes at lower-order modulation (from QPSK to 32QAM) that provide the operator with a software-programmable tradeoff between reach and data rate. Such a feature will enable operators to use the same equipment for metro links and for long-haul and regional links.

Metro-DCI platforms will support seamless interfaces to 100 Gigabit Ethernet clients coming from data center switches and routers, with full termination and packet monitoring capabilities. Figure 5 shows an example of a disaggregated implementation in a "pizza box" form factor, which provides the webscale operator with a convenient way to build capacity on a modular basis.

The next generation of coherent interfaces, including both DSPs and optics, will offer significant improvements in performance, density, and power, and will have the flexibility for optimization so that both Metro-Telecom and Metro-DCI operators can increase their capacity while driving down cost/bit.