Despite having a similar acronym and emerging at roughly the same time, the CFP and CXP form factors are markedly different in terms of size, density, and intended application. 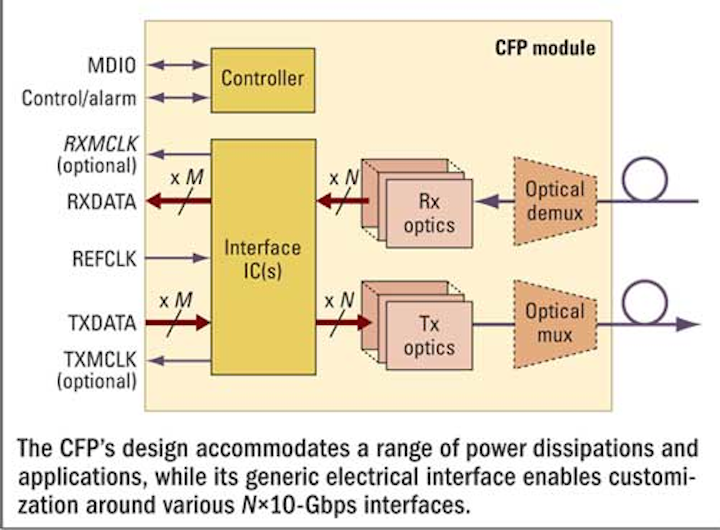 Despite having a similar acronym and emerging at roughly the same time, the CFP and CXP form factors are markedly different in terms of size, density, and intended application.

The CFP and CXP optical transceiver form factors are hot pluggable, both feature transmit and receive functions, and both support data rates of 40 and 100 Gbps. But the similarities begin and end there. Aimed primarily at 40- and 100-Gigabit Ethernet (GbE) applications, the CFP supports both singlemode and multimode fiber and can accommodate a host of data rates, protocols, and link lengths. The CXP, by contrast, is targeted at the clustering and high-speed computing markets. The two are therefore complementary, not competitive, according to several sources.

The CFP form factor, as detailed in the MSA, supports both singlemode and multimode fiber and a variety of data rates, protocols, and link lengths, including all the physical media-dependent (PMD) interfaces encompassed in the IEEE 802.3ba Task Force, which is expected to ratify its standard in 2010. At 40GbE, target optical interfaces include the 40GBase-SR4 for 100 m and the 40GBase-LR4 for 10 km. There are three PMDs for 100 GbE: 100GBase-SR10 for 100 m, 100GBase-LR4 for 10 km, and 100GBase-ER4 for 40 km.

There are several design features that enable the CFP transceiver to support this range of distances as well as various power dissipations. First, its size is optimized for longer-reach interfaces and single-mode fiber applications; it is 120 mm long and 86 mm wide, which is the same length but twice the width of a 10GbE XENPAK.

Finally, the CFP also features a new concept known as the riding heat sink, in which the heat sink is attached to rails on the host card and "rides" on top of the CFP, which is flat topped. The heat sink can be included or omitted depending on the thermal requirements of the host system. When included, the heat sink presses down on the module, providing a good conductive surface that is also low friction, says Traverso, making it very easy for the operator to insert the module into the host board.

Traverso says Opnext has just begun sampling its CFP transceivers and expects to go into production early next year to coincide with the completion of the IEEE 802.3ba standard. The company displayed its 100GBase-LR4-compliant CFP device at OFC/NFOEC in March.

Finisar also used OFC/NFOEC to display its 40 and 100GbE CFP form factor. Rafik Ward, vice president of marketing at Finisar, confirms that his company is developing "a whole host of different CFP form factors," each of which will have a different availability timeframe. "But in general," he says, "I think you'll start to see CFP modules, certainly from Finisar, available in production in 2010."

Other companies currently developing CFP modules include Avago Technologies, which is now a member of the CFP MSA, and Santur Corp., which is not a member of the MSA but demonstrated a 100-Gbps transceiver platform running over 40 km of single-mode fiber at OFC/NFOEC 2009. (Editor's Note: NeoPhotonics purchased Santur in 2011; see "NeoPhotonics agrees to acquire Santur.")

Technically, the CFP will work with multimode fiber for short-reach applications, but it is not really optimized in size for the multimode fiber market, most notably because the multimode fiber market requires high faceplate density. The CXP was created to satisfy the high-density requirements of the data center, targeting parallel interconnections for 12x QDR InfiniBand (120 Gbps), 100 GbE, and proprietary links between systems collocated in the same facility. The InfiniBand Trade Association (www.infinibandta.org) is currently standardizing the CXP.

The CXP is 45 mm in length and 27 mm in width, making it slightly larger than an XFP. It includes 12 transmit and 12 receive channels in its compact package. This is achieved via a connector configuration similar to that of the CFP. "The CXP actually has two such arrangements with high-speed connections on two different levels," notes Traverso. "They kind of folded it, so they are able to make the module much narrower and still have space for up to 12 data lanes."

For perspective, the CXP enables a front panel density that is 9× greater than that of an SFP+ running at 10 Gbps.

In addition to its targeted InfiniBand applications, the CXP may also supplant the existing SNAP-12 module, which is also 12 channels but features separate transmit and receive modules, requiring customers to buy the SNAP-12 in pairs. "I see CXP being a potential replacement for SNAP-12," says Ward, "just in the fact that it's pluggable and much, much smaller and thus higher density than the SNAP-12."

Of the trio that launched the CFP MSA, only Finisar has a CXP offering, and it is currently in the sampling stage. Sumitomo Electric Device Innovations USA is in the R&D phase on an active cable using the CXP form factor, reports Iwadate, who adds that his company is still weighing the market opportunity.

Ditto for Opnext. Says Traverso, "We're actually getting most of the pull in the market from our customers on the 10-km reach, which is a singlemode fiber variant. The CXP is not in a position to be able to deliver 10 km of reach. Most of our customers are very anxious to have that 10-km link product on their boxes as soon as possible, so we see that being a more interesting market in the near term."

"We'll be sampling customers this year with the CXP cable," says Ward, "and I expect to be in full production in 2010."

By all accounts, the CFP and CXP form factors are complementary, with the CFP likely gaining traction in applications like Ethernet switches, core routers, and optical transport equipment, and the CXP covering the data center market.

"Now, that's not to say there won't be some designs that use CFP for multimode fiber, and in that sense, they could compete there," Traverso admits. "But it becomes more of a choice for system vendors. Do they need to build a box that can adapt to any interface? If so, they would probably use CFP. If it's a box that is just focused on the short-reach market, then they would probably use something more like CXP."