The rise and rise of XFP 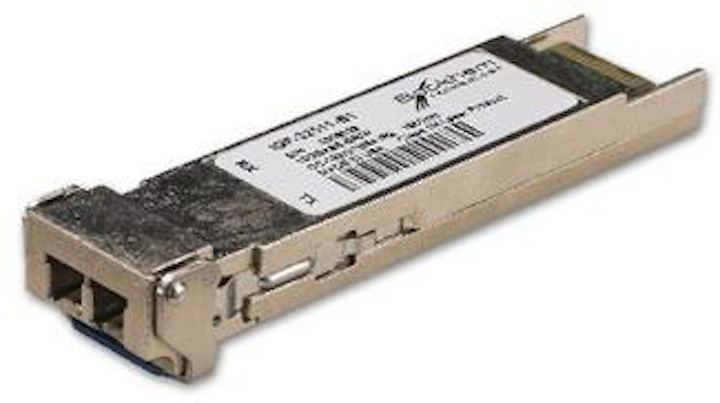 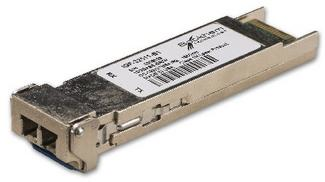 XFPs like this 40-km transceiver are rapidly being designed into both telecom and datacom applications.

XFP, the latest of the standardized form factors for 10-Gbit/sec optical transmission modules, has come a long way quickly. Many carriers have deployed XFP devices in the field to successfully carry growing amounts of live traffic. These initial deployments are primarily for client-side short-reach applications, but second-generation XFP devices are now appearing that will go on the metro line side to handle longer reaches and DWDM. The deployment of these long-reach XFP devices is likely to occur very rapidly.

Multi-source agreement (MSA) form factors for 10-Gbit/sec optical transponders and transceivers have evolved along two separate paths that are now converging on XFP as a universal long-term solution. On the telecom side, the long-established 300-pin transponder module was adapted for SONET OC-192 and SDH STM-64 protocols. On the datacom side, three additional hot-pluggable form factors were introduced: XENPAK, XPAK, and X2 for 10 Gigabit Ethernet (see Table). But both the telecom and datacom markets are now starting to migrate to XFP, bringing about a reconvergence that embraces core switching/routing applications -- with enterprise applications soon to follow.

The XFP module is an ultra-small, hot-pluggable, 10-Gbit/sec optical transceiver form factor that was standardized by the XFP MSA Group to help drive cost and power consumption out of 10-Gbit/sec optical networking applications, while enabling rapid advances in port density.

XFP specifies transceiver operation, so the electrical and optical data are both serial. 300-pin, XENPAK, XPAK, and X2, in contrast, are transponders and have an integral SERDES to map several lower-rate parallel electrical streams into a higher-rate serial optical stream, and vice versa. So XFP separates the cost of the SERDES chip from the optical module, allowing independent optimization and lower-cost optical sparing. Even better, SERDES chips that drive multiple XFPs are now emerging, further reducing the cost per XFP port.

In general, XFP costs approximately 30% to 40% less than other MSA form factors, and is far more compact, giving two to three times the density. As it is multiprotocol and hot-pluggable, it's not surprising that the industry is lining up behind it. But there is still controversy over the very practical questions of how fast each application will move to XFP -- and therefore how quickly it will displace the other MSA form factors.

XFP applications have taken a few twists as the transceivers have moved from concept to deployment. Many people thought that the storage market would be a key early adopter; instead, most Fibre Channel-based SANs are not moving directly to 10-Gbit/sec, but are making a detour via the intermediate speed of 4 Gbits/sec, and then perhaps to 8 Gbits/sec. It turns out that early adoptions of XFP have been in SONET/SDH, core switching and routing, and nontraditional Gigabit Ethernet applications, such as DSL extension.

It is also interesting to note the changing value proposition as the XFP moves from the client to the line side. Capital expenditure (capex) savings from higher port densities and lower prices are very important here, as they are on the client side, so XFP will have a big impact on metro networking in terms of lower costs. But as carriers continue to look for ways to cut costs beyond today's capex rates, operating expense (opex) savings have suddenly sprung to prominence.

And even here there is a twist. Hot pluggability clearly leads to lower opex by simplifying network reconfiguration and maintenance, but this is not the most important factor. The key point is that in today's competitive and volatile environment, carriers' link capacity forecasts are often inaccurate. With XFP, discovering three days before a network is due to be turned up that a 40-km link needs to be replaced by an 80-km link on a different wavelength is not a problem -- it's the same slot, just plug in a different wavelength or reach. This reduced sensitivity to forecasting errors is a fundamental advantage for line-side XFP applications.

300-pin devices dominate the current installed 10-Gbit/sec module base, but will now begin to face replacement by XFP. Although XENPAK deployments are also growing, XENPAK is not multiprotocol, being specific to 10-Gigabit Ethernet -- and, as Table 1 shows, it is very bulky and power-hungry compared to XFP. XPAK and X2 aim to fix some of XENPAK's limitations and allow support of the OIF's new SFI-4 Phase 2 interface in place of the XAUI interface, but they are still larger and more complex than XFP. Most industry observers expect XENPAK, XPAK, and X2 to play a transitional role until XFP becomes dominant.

In telecom, virtually all new client-side designs are now using XFP. So XFP is effectively displacing 300-pin modules at the rate at which existing 300-pin designs become obsolete -- in fact, a little faster because there are also cost-reduction redesigns going on.

On the metro line side, Bookham believes that in 2005, XFP will become widely deployed for 40- and 80-km reaches and XFP-based WDM deployments will begin. In 2006 we will see >80-km replacements as we start to put longer-reach technologies in XFP. These advances include a combination of technologies such as III-V modulators and electronic dispersion compensation (EDC); they mark an increased erosion of the 300-pin module metro market. One area that will hold on to that 300-pin form factor for a longer period will be long-haul devices.

XFP will also be able to exploit large new opportunities in enterprise networks, especially the forthcoming IEEE 10-Gigabit Ethernet standard 10GBase-LRM that operates on FDDI-grade multimode fiber for links of several hundred meters. This is an ideal capacity upgrade for existing 1-Gigabit Ethernet (1000Base-SR) links between a wiring closet and a data center, because the existing fiber plant can be reused. This is expected to be a very large application, involving large module volumes.

In summary, XFP is expanding in both directions from its initial deployments as 2- to 10-km client-side links, with metro applications demanding longer reaches and DWDM on the high side, and enterprise applications optimized for short, multimode fiber spans on the low side. Its versatility, low cost, and small footprint are making XFP the form factor of choice for an ever-growing set of 10-Gbit/sec communications applications.

Steffen Koehler is vice president of marketing for transceivers at Bookham Technology. He can be reached via the company's website, www.bookham.com.