Optical transceiver sales to shrink less than 3% in 2018: LightCounting

LightCounting, in a newly released “Optical Communications Market Forecast Report,” predicts that sales of optical transceivers to mega data center applications will nearly offset declines in demand from telecom systems applications. As a result, overall transceiver sales declines in 2018 will be limited to less than 3%. Looking ahead, LightCounting also identifies opportunities for growth in the near term. 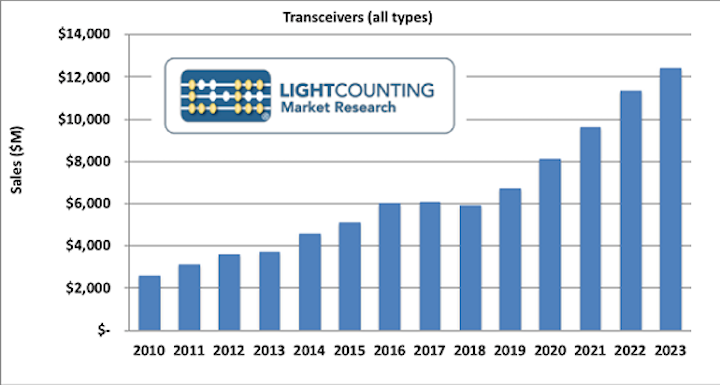 LightCounting, in a newly released “Optical Communications Market Forecast Report,” predicts that sales of optical transceivers to mega data center applications will nearly offset declines in demand from telecom systems applications. As a result, overall transceiver sales declines in 2018 will be limited to less than 3%. Looking ahead, LightCounting also identifies opportunities for growth in the near term.

The market research firm points to weakened demand from such Chinese systems houses as Huawei and ZTE for the softness telecom module demand has experienced over the past two years. Both companies burned through excess inventory in 2017 but optical module vendors report that they haven’t seen the pickup in demand one would expect once those inventories lessened. Of course, ZTE’s troubles with the U.S. Commerce Department didn’t help matters (see “ZTE back in business as Commerce technology ban suspended”). LightCounting estimates the technology ban ZTE suffered reduced its optical transceiver spending for the year by 20% to 30%. Meanwhile, the ban had a ripple effect on network build outs across the world as operators waited to see how the scandal would end, LightCounting believes.

The market research firm notes that, at least partially in reaction to the issues ZTE has experienced, both systems houses and the Chinese government have made it a policy to create and nurture in-country sources of optical technology (see “New 5-Year Optical Component Plan from China’s MIIT spells trouble for foreign suppliers: Cignal AI”). Such policies naturally don’t bode well for optical transceiver vendors looking for a major rebound from China.

However, cloud network and major data center operators should continue to be a strong source of revenue, says LightCounting. Demand for 100 Gigabit Ethernet (GbE) modules remains strong (although prices have declined), while some operators have already begun to deploy higher-speed devices. For example, Google has begun to roll out 2x200GbE optical transceivers and should continue these deployments next year. Overall, LightCounting predicts sales of 200GbE, 2x200GbE, and 400GbE optics to cloud operators will grow from $2.3 billion in 2018 to more than $6.8 billion in 2023. Broadcom’s announcement of mass production of Tomahawk 3 Ethernet switches, nearly a year ahead of expectations, is a catalyst for this trend, the market research firm points out.

There are other areas of potential growth as well. LightCounting is bullish on access optics for FTTx and wireless as well as optical interconnects. Applications such as 5G should promote demand of 25G “grey” and WDM fronthaul optics; in fact, sales of such devices have already begun to increase this year. Meanwhile, WDM in general is a growth application, and LightCounting says it has increased its sales forecast for CWDM and DWDM modules in 2019-2023, in part as shipments of 10G CWDM transceivers this year have exceeded the company’s expectations this year. Meanwhile, volume shipments of 600G DWDM modules should begin early next year.

Helping the WDM market is what LightCounting perceives as a new DWDM system upgrade cycle. The company points to reports from suppliers of strong sales in pump lasers for applications in fiber amplifiers since the second half of 2017 as evidence of this potential event. Adding to LightCounting’s confidence is reported sharp increases in wavelength-selecting switch (WSS) module sales so far this year. Taken together, these factors should put optical transceiver sales back on a growth path beginning next year, as the figure above illustrates.