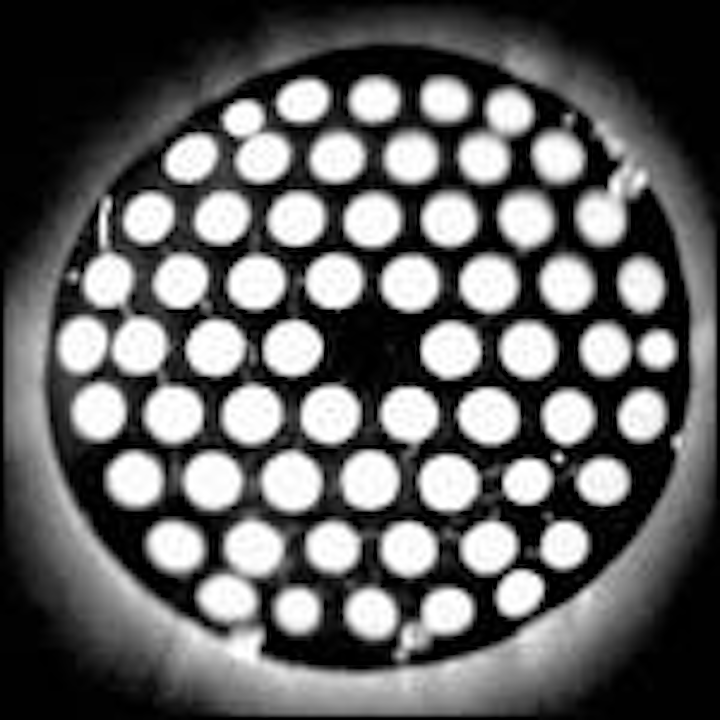 With economics and performance continuing to drive new-product development, fiber manufacturers have left no stone unturned in the quest for specialty fibers that could help improve transmission speeds and distances. Micro structured fibers-fibers with "holes" that run along the core or in some cases substitute for the core-represent an ongoing area of research in this vein. Recent announcements suggest that these fibers have moved further from being exotic topics of research to achieving a status closer to application. 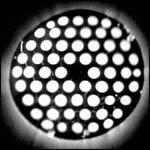 The array of micro structures provides a significant change in refractive-index versus conventional fibers. The polymer can be doped for specialty applications. (Source: Redfern Polymer Optics Pty. Ltd.)

As reported previously (see Lightwave, August 2000, page 1), microstructured fibers attempt to take advantage of the fact that air, with a refractive index of 1, presents the perfect "cladding" medium to ensure that the fiber core retains the light injected into it. Thus, such fibers promise to accommodate higher-power transmissions. In addition, dopants can be added to the microstructures to change the optical properties of the fiber, either to improve performance in the field or perform specialty functions within components and subsystems.

While lab tests have shown micro structured fibers (also called "crystal fibers") offer good performance, they are extremely difficult and expensive to produce. Generally, hollow glass tubes are placed around a preexisting fiber core, then melted together into a preform before drawing. The task of creating the preform and drawing the fiber while maintaining the desired shape and size of the air gaps has proven to be the major hurdle in deployment.

In addition, Maxwell says that the use of polymers opens the door to the advantages touted previously by the advocates of "plastic optical fiber." These advantages include the accommodation of a wider effective area, easier material handling and installation, and the ability to accommodate dopants more readily than silica.

However, Maxwell concedes that Redfern's new manufacturing process (de tails of which he declined to reveal, other than to say it does not involve the use of free radicals) does not overcome the limitations found in other applications of polymer fibers. High attenuation represents the primary drawback to the use of polymer fibers, and Maxwell anticipates that Redfern's first customers will likely look to apply the fibers in short-distance or component and subsystem applications, including dispersion compensation. Maxwell says his company is looking to partner with potential customers to help set the direction of future development.

While researchers pursue further refinements in the use of microstructures surrounding a light-bearing core material, the use of microstructures as the core also has attracted interest. These fibers, known as "bandgap" fibers, attempt to use air as the light-guiding medium, with the goal of removing material-based dispersion and attenuation from the power and distance equation.

OmniGuide Communications (Cambridge, MA), a startup out of the Massachusetts Institute of Technology, has based its business plan on the development of such fibers. According to Uri Kolodny, co-founder and director of marketing, the company's technology involves a hollow core surrounded by alternating layers of two materials, then the cladding. He would not reveal the nature of the materials, but he says the materials absorb only 1% of the light that enters the core.

Kolodny claims that the bandgap fiber exhibits only 0.01 dB/km of attenuation across a 200-nm window, plus as much as 10,000 times the non-linearity of silica-based cores. The use of such fiber would accommodate WDM at zero dispersion. Also, the fiber exhibits no polarization-mode dispersion, making it ideal for very-high-speed transmission. The fiber will not require special transmitters or receivers and will use industry-standard connectors, Kolodny says.

The main hurdle remains manufacturability, Kolodny admits. However, he promised "exciting results" within the next several months.