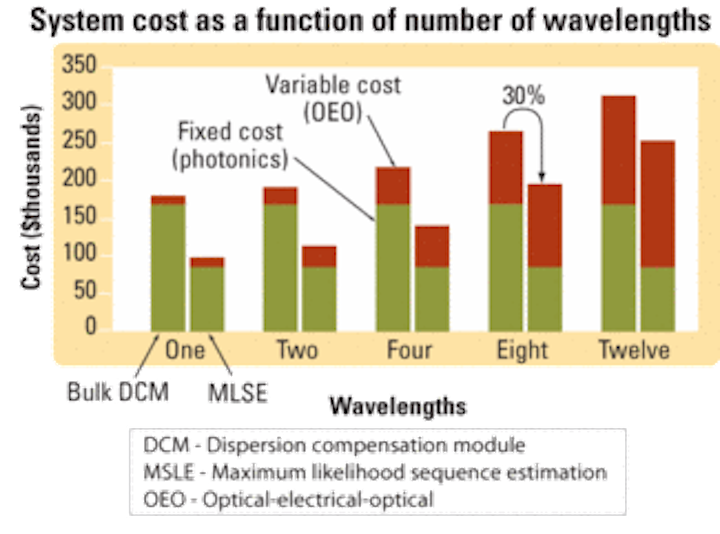 As an equalization technique, digital EDE replaces optical bulk dispersion compensation modules (DCMs) with electrical processing in silicon. Silicon has a lower cost compared to bulk DCM, which is a spool of negative-dispersion fiber. Such fiber is expensive to manufacture, with few economies of scale possible for volume production. Silicon, on the other hand, requires significant design investment up-front, but once that investment is made, high-volume manufacturing dramatically reduces recurring costs.

Bulk DCM is not only expensive, but also it adds extra loss on top of the usual fiber loss, which must be compensated with extra amplification. That in turn adds noise, reducing the optical signal-to-noise ratio (OSNR) of the signal and hence reducing the distance achievable before regeneration is needed. Bulk DCM further reduces system margin because the technique increases the risk of polarization mode dispersion (PMD) and four-wave mixing (FWM).

Digital EDE can be used to achieve a 30% reduction in capital expenditures (capex) across point-to-point networks. Let’s use a typical metro transmission system-a 4×80-km-span network (320 km total), populated with eight 10-Gbit/sec wavelengths (out of a typical maximum of 32 wavelengths)-as a benchmark for examining the relevant costs. When used with a typical 10G transponder, bulk DCM is able to extend the reach of a 10-Gbit/sec wavelength beyond its typical dispersion limit of 100 km.

EDE/MLSE, by contrast, completely eliminates bulk DCM from the network and removes the need for second-stage amplifiers. MLSE-transponder optical-electrical-optical (OEO) costs are slightly higher to account for the extra MLSE components, but the net effect is a large cost savings combined with a greatly simplified network configuration.

Additional cost savings can be achieved over multiple spans. For a single span, EDE/MLSE and bulk DCM approaches cost the same since the elimination of bulk DCM is balanced by the extra cost of the MLSE transponders. For multiple spans, however, the MLSE solution is always the lowest-cost approach.

After four spans (i.e., 320 km), the use of low-cost metro transponders and filters requires a bank of regenerators in both models. The use of higher-performance long-haul system modules would increase the distance before regeneration but at the penalty of a higher initial cost. 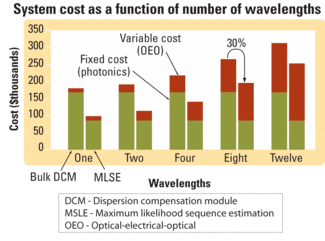 Another reason that EDE/MLSE-based system costs are more attractive for service providers than bulk DCM is that the variable cost is related to incremental revenue per service (i.e., on a per-wavelength basis). Thus, system deployment and growth is easier to account for when compared with the one-off initial build cost of bulk DCM. In fact, the greatest cost savings are obtained when the wavelength count is small, thus facilitating low first-in costs. In the example shown in Figure 1, even though each MLSE wavelength has an incremental cost due to additional receiver silicon, MLSE continues to deliver cost savings up to a total capacity of 40 wavelengths.

EDE also achieves a 24% reduction in capex across ring networks. Consider a five-node regional ring network, populated with eight 10-Gbit/sec wavelengths (out of a typical maximum of 32 wavelengths). The nodes comprise a single hub or headend, two optical add/drop-multiplexer (OADM) nodes and two intermediate line-amplifier nodes. The 400-km circumference is determined by four 80-km spans (i.e., 320-km total from the hub to the last node) and the closing span of 80 km (see Figure 2). 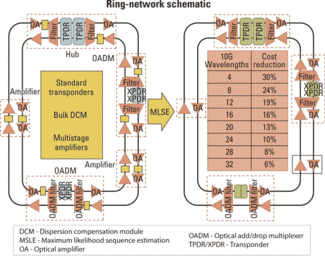 Figure 2. The use of MLSE significantly simplifies ring architecture and lowers cost.

In a ring configuration with optical add/drop functionality, it is difficult to plan and deploy bulk DCM. All wavelengths must be compensated, and many constraints come into play. For example, it is important not to place too much loss at one node, which becomes an issue at OADM nodes where both a DCM and an OADM filter are required. The receiver margin also must be good, which is not always possible, resulting in a non-optimal expensive network design.

Digital EDE also can be used to achieve an 80% reduction in capex across a ring network when upgrading an existing 2.5-Gbit/sec ring network to carry 10-Gbit/sec wavelengths.

For many service providers, it is simply not economical to deploy a new 10-Gbit/sec overlay, since their existing 2.5-Gbit/sec infrastructures are not yet fully utilized, nor is it economical to upgrade using the bulk DCM approach. Such an approach would necessitate the interruption of live traffic to add DCM, swap amplifiers for dual-stage units, and test and commission, making it both expensive and extremely impractical.

The alternative is to make use of the increased dispersion tolerance and 10-Gbit/sec link distance afforded by EDE/MLSE. Thus, new 10G wavelengths may be added to a network previously engineered only for 2.5G wavelengths. 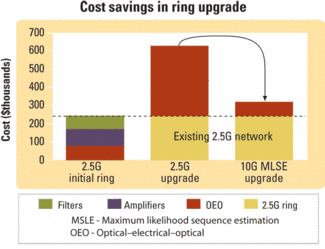 Figure 3. The fact that MLSE enables a carrier to use its existing topology dramatically reduces the cost of upgrading from 2.5 to 10 Gbits/sec by 80%.

The dramatic reduction in costs shown in Figure 3 arises from using 1:4 and 4:1 inverse multiplexing functions plus associated 10G interfaces in the case of the 2.5G upgrade approach. The 10-Gbit/sec MLSE approach incurs only the cost of a set of 10G transponders.

In the above cases, digital EDE enables more flexible wavelength networks by providing complete flexibility of optical switching, routing, or add/drop and reducing the network costs of extending a fiber to the end user.

Indeed, networks based on reconfigurable OADMs (ROADMs) are practically unmanageable unless the system has a high degree of adaptive tolerance to path-dependent dispersion characteristics. EDE/MLSE provides this capability within its total distance/dispersion capability. Unlike bulk DCM, MLSE works on each wavelength individually and thus provides optimum compensation even as different wavelengths take different routes.

For example, the network designer doesn’t need to trade off OSNR and dispersion to position high-loss bulk DCM at OADM nodes, and there is no need to pre-plan a dispersion map for all possible OADM locations or for all add/drop route combinations.

Systems are planned today that will enable the use of add/drop branching or extending a fiber from an OADM or ROADM site to a customer site. That’s important for many regional networks, where the regional backbone fiber may pass along a railway or gas pipeline and is not close enough to the end user, who may be in the central business area of a town (see Figure 4). 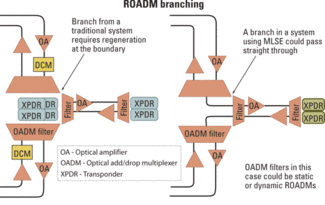 Without MLSE, the challenges of planning for both dispersion and an acceptable OSNR in a flexible ROADM network would make this impossible without a regenerator at the boundary. Such an architecture is more expensive and increases provisioning time. EDE/MLSE provides increased flexibility and delivers a more elegant and cost-effective network.

As a final example, digital EDE enables simpler and lower-cost plug and play network links across different fiber domains. In general, operators deploy metro, regional, and long-haul networks in different build phases, often over an extended number of years. As a result, heterogeneous links composed of different fiber must be used to provide a given end-to-end connection.

To address this issue, some system vendors break the network into separate spans so that the different dispersive regions are isolated from each other. While this approach does work, it requires a lot of expensive electrical regenerators at intermediate nodes, hardly an ideal situation for the network provider.

The open tolerance of EDE/MLSE enables the network designer to be less concerned with the specific characteristics of each link. Provided that the total link is within the capability envelope of the MLSE transponder, it will adapt to the wavelength-specific conditions that it encounters while operating.

Digital EDE using MLSE is the most cost-effective approach for building flexible and tolerant metro core and regional networks. Intelligent electronics is the cornerstone for converged DWDM networks, and digital EDE has a key role to play. When integrated into receivers and transponders, EDE/MLSE immediately benefits systems houses and network providers by providing increased performance, margins, and tolerance to impairments.

Dramatic economic benefits can be achieved across a wide range of metro- and regional-network scenarios and applications. Incurred on a per-wavelength basis, the deployment costs scale in the most beneficial way for network providers since low first-in cost is a key advantage in today’s economical DWDM networks.