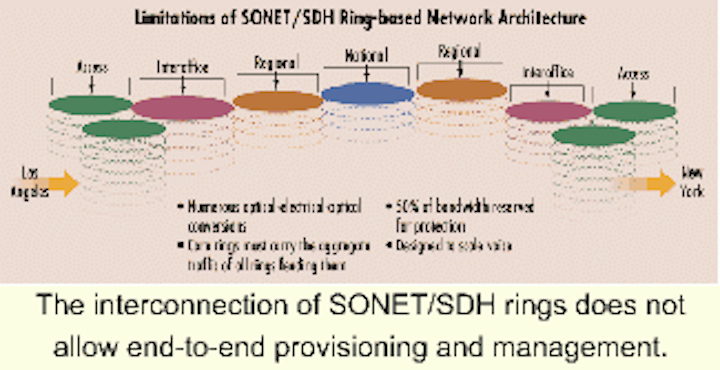 Switching software that can manage millions of light paths in a mesh architecture is a key challenge of intelligent optical networks.

What's in a name?" asked an article that ran in Lightwave's supplement, Fiber Exchange (March 25, 2000, p. 13) some months ago, as the author explored the industry confusion regarding the differences between optical crossconnects (OXCs) and optical switches, terms frequently used interchangeably. Vendors, carriers, and analysts all weighed in on their preferred terms for these devices, which redirect light from optical input and output points.

The tentative consensus was that the term "crossconnect" generally depicts the old-fashioned or first-generation patch panels, while "switch" refers to the newer technology, which offers routing and management functions and is designed for use in a mesh architecture. The line between the two terms is not completely drawn, however.

What's clear is that the debate over these terms is arising from a change in communications networks, as crossconnect/switching technologies evolve to relieve the strains of an overloaded public network. Defining the differences between OXCs and optical switches will help to explain where these new technologies fit in next-generation networks.

The new crossconnect/switch technologies will be used for different applications. Some of these devices will serve as digital-crossconnect replacements, which assumes the network will continue to be built as it has been in the past. Others will be used as "intelligent" optical switches to address the new challenges of the optical core.

This year is pivotal for optical switching. Intelligent optical switching has moved from a concept on PowerPoint slides to products and now early deployment. The major challenge ahead is to develop switching software that can control and manage thousands of switches and millions of light paths as a single network that provides continuous availability.

These new devices can extend the life of SONET/SDH rings, but will not help carriers evolve their infrastructures toward service-ready network architectures, since this equipment lacks networking intelligence and end-to-end point-and-click provisioning capabilities. While this strategy may offer an interim solution for carriers that have invested heavily in SONET/SDH ring architectures, it will eventually become untenable, as there are serious limitations to the SONET/SDH architecture with respect to efficiency and timely provisioning of revenue-generating services.

SONET/SDH ring architecture works well as the voice infrastructure it was designed for with its strong failure-protection mechanisms, namely the concept of rings. But that essentially cuts in half the available bandwidth for working traffic. In the SONET/SDH model, there must be protection bandwidth equal to the bandwidth for working traffic available on the same ring. With organizations pushing the need for multiple OC-3/STM-1 (155 Mbits/sec) and OC-12/STM-4 (622 Mbits/sec) at the access of the network, protection bandwidth quickly becomes a limiting factor in the available capacity of a carrier network. 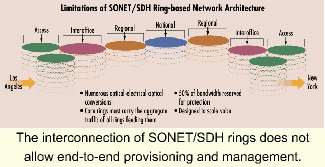 The interconnection of SONET/SDH rings does not allow end-to-end provisioning and management.

In addition, when traffic increases on a SONET/SDH network to meet these demands, every ring in the network must be upgraded, resulting in a costly and time-consuming process. As a result, there is no mechanism for automatically provisioning and managing a circuit from end-to-end in the ring architecture. The connection must be manually mapped at each point where one ring is connected to another. Management frames must also be mapped from one ring to another. This task is labor-intensive and needs to be done carefully to make sure the proper connections are made. Because digital- crossconnect replacements maintain the SONET/SDH architecture, these devices do nothing to alleviate these architectural problems.

The intelligent optical switch, on the other hand, solves both problems by serving as transition equipment in legacy infrastructures and offering true mesh capabilities. Generally, intelligent optical-switch applications focus on the migration from a static environment to a flexible mesh architecture. In these applications, service providers want to deliver dynamic bandwidth services ranging in speeds from STS-1 to OC-192 (10 Gbits/sec) today and moving to higher data rates in the future. An Ethernet hierarchy must also be supported. The word "intelligent" before the optical switch refers to the sophisticated routing and signaling software used to create and manage a flexible mesh infrastructure to deliver services in real time. Today's intelligent optical-switching applications utilize electro-optical switching products. Optical bandwidth is deployed and re-deployed in a moment's notice to meet changing customer demand. In effect, creating "fluid bandwidth" and delivering true services on demand.

The next-generation of intelligent switches add routing and management software to automate provisioning, routing, and restoration of light paths, along with integrated SONET/SDH functions. That enables any-to-any node connectivity and multilevel, nested protection schemes on a port-by-port basis. The goal is to provide the most efficient use of wavelengths and fiber through subrate grooming, Express Trunk association (efficiently packing subrate services onto wavelengths), and network optimization advice.

Used in intelligent optical networks, intelligent optical switches provide data-like networking in the optical domain and traffic engineering at the wave level, which allows carriers to optimize light paths. The result is scalable networks that can expand as IP traffic grows and offer better performance due to the minimization of hot spots and failure points.

Service providers are building large networks composed of many elements of varying sizes. The larger the network becomes, the more intelligence it requires for smooth operation.

Each of the network elements must be aware of the other elements' bandwidth characteristics and how that bandwidth interconnects with the network's switches. This is the only way services can be delivered end-to-end over an intelligent optical network.

However, the transition to these optical mesh networks will not happen overnight. The Table offers a transition timeline based on the emergence and commercial availability of next-generation optical-switching solutions. Many networks must evolve from pure SONET/ SDH to fully meshed architectures. Service providers have invested heavily in current platforms and need a migration path that allows the use of existing infrastructure, while laying the groundwork for the mesh architecture. During this migration, the switching devices will be used to connect the underlying optical transport network to IP routing devices.