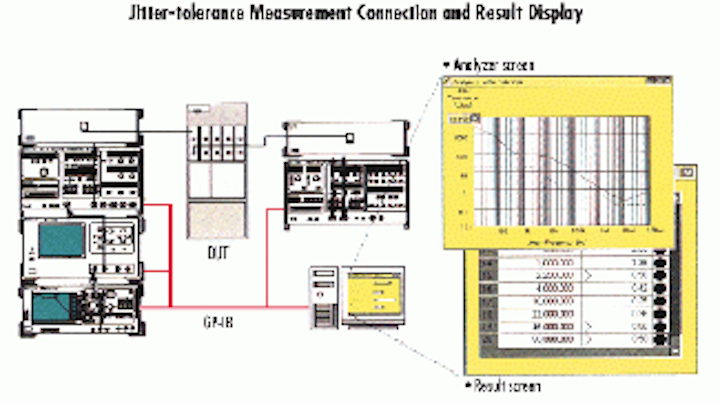 In the decade since the International Telecommunication Union-Telecommunication (ITU-T) approved recommendations on the use of synchronous digital-transmission systems, the fiber-optics industry has undergone major advancements. One has been increased transmission speed, leading to the development and implementation of oc-192/stm-64 (10-Gbit/sec) transmission systems. These systems overlay another major advancement, that of dense wavelength-division multiplexing (DWDM) technology, used to attain high-capacity transmission on a single fiber. These technologies are required to meet the increasing capacity requirements in today's competitive communications networks.

A tremendous amount of effort is put forth to further develop DWDM technology because of its great potential. DWDM offers carriers many options to achieve terabit transmission capacity on a single fiber through a combination of increased channels (up to 128) and higher data rates (up to 40 Gbits/sec or OC-768). Field deployment of 40-Gbit/sec rates is a ways off, however. Today, the industry is tackling 10-Gbit/sec deployment; these rates will play a major role alongside the existing OC-48 (2.4- Gbit/sec) transmission systems. In support of this, there is much interest in 10-Gbit/sec measurements, both in manufacturing and in the field.

As larger data packets move through fiber lines at faster rates, there is a dramatic increase in transmission-line jitter, a phenomenon in which the transmission signal phase fluctuates vis-à-vis the ideal time position. The type of data and traffic now carried over fiber is very diversified, which puts much more emphasis on the effects of jitter.

Recognizing the challenges jitter has created for both system manufacturers and test equipment companies, the itu-t 0.172 recommended standards on how to measure jitter. In March 1998, those standards were approved for 10-Gbit/sec carrier rates.

It is becoming increasingly necessary to do jitter measurements on components and transmission equipment to ensure system integrity. In a digital network, the noise and transmission pattern on a transmission line can disturb the timing of signals and shift pulse edges out of phase before and after their average position. The resulting effect is the closing of the eye opening, referred to as jitter or wander, depending upon the transition frequency of 10 Hz (phase-change frequency/phase-modulation frequency). If it is below 10 Hz, it is considered wander. If it is above the 10-Hz threshold, it is called jitter.

In a transmission network, jitter accumulates according to the jitter generation and jitter-transfer characteristics of the components being interconnected. An adverse amount of jitter will affect both digital and analog signals. To ensure that the interconnection of digital equipment does not accumulate jitter that exceeds the network limits, the jitter generation and transfer of individual network elements are defined.

In order to accurately conduct jitter analysis, a number of tests must be performed. Jitter tolerance evaluates to what extent a device under test (DUT) operates without causing an error when the input signal to the DUT is a sinewave jitter modulation (sinewave phase modulation) and the jitter amplitude is increased.

Jitter-transfer characteristics measurement evaluates to what extent the jitter amplitude is transferred to the output side when a sinewave modulation (sinewave phase modulated) signal is input to the DUT. This measurement is very important for restricting jitter accumulation.

Another measurement, jitter generation, requires that the DUT generate quantity a pre-defined amount of jitter--for example, 0.01 UIrms or less--at all OC-1 (51.84 Mbits/sec) to OC-XXX bit rates. Other important measurements include mapping jitter and combined jitter.

For each component there are specific jitter-measurement requirements. As an example, for a clock recovery module in a submarine transmission system, it is necessary to check the jitter-transfer characteristics to analyze to what extent the DUT attenuates the jitter component of a jitter modulated data signal at each jitter frequency.

A jitter-tolerance measurement is suitable for applications such as performance evaluation in a research and development department, whereas a jitter-sweep measurement is appropriate for applications such as shipment inspection during mass production of DUT in manufacturing. All of these components appear in today's networks and will reside in future networks as well in large quantities as a result of the multiple channels that accompany DWDM. The following list provides examples of important DUT measurements:

Using the standards as the foundation, new test instruments are being developed that will assure proper jitter measurement. As fiber-optic transmissions become more complex and network traffic increases, the need to measure jitter becomes paramount. In pre-WDM systems, there was much less traffic, which in turn produced less jitter. The effect of jitter on a signal was not as great due to the lower data rates.

In today's systems, there is much more jitter within a fiber-optic line due in part to the sheer volume of data. Because of the sensitivity of the signals being transmitted, jitter can create a fatal transmission error, burst errors, and long-term error, if it isn't properly measured and controlled.

The ITU-T standards outline test instrument requirements so jitter analysis can be conducted properly. Instruments need the ability to measure up to 80-MHz jitter bandwidth on jitter generation and measurement, and up to 3200 UIp-p of maximum jitter-modulation amplitude. A jitter analyzer should also have a clock with a 10-Gbit/sec bit rate. In fact, with the application of FEC in future optical systems, other clock rates are necessary. FEC (out of band) will play an important role in the future as it allows more inherent noise in the system to support the deployment of optical amplifiers as well as optical add/drop multiplexers (OADMs). With FEC incorporated in the system, degraded optical signal-to-noise (OSTN) is acceptable in the system design.

It remains a difficult task, but with ground rules in place, accurate testing of the jitter characteristics of oc-192/stm-64 high-bit-rate transmission systems is possible. To properly evaluate the effect of jitter on transmission signals, analysis of jitter tolerance and transfer characteristics is required. As a result, international standards, such as those of the ITU-T, regulate the amount of jitter generated and the required suppression characteristics for multivendor intersystem connections.

Using the ITU-T standards as a basis, it is possible to develop a test system that transmission system manufacturers can use with a great deal of confidence. At the core of this system is a 10-GHz jitter analyzer with up to 80-MHz jitter bandwidth. The analyzer has a jitter measuring function that works with OC-48/STM-16 (2.5-Gbit/sec) to OC-192/STM-64 systems. A single instrument with these specifications and features can accurately measure an OC-192/STM-64 transmission system. 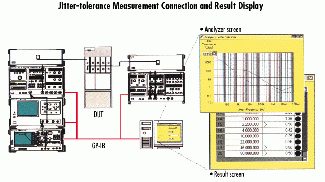 With the addition of software, the jitter analyzer can be integrated with a 12.5-GHz error detector and network analyzer to create a jitter tolerance measurement system (see Fig. 1). The integrated system can "automatically" determine the jitter-tolerance point of a DUT with the press of a button. After the button is pressed, the software controls the output level of the network analyzer to change the amount of jitter. At the same time, the error detector monitors the error occurrence to automatically determine the jitter tolerance point. All of the system functions can be controlled via a PC, with the results clearly displayed on a computer monitor and stored for analysis or archiving. 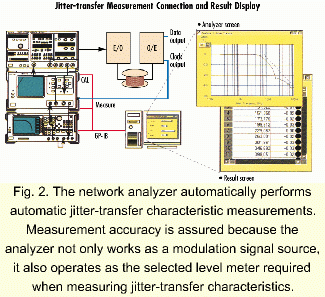 The jitter analyzer can also be combined with an OC-192 SONET analyzer Jitter-transfer analysis is just as easy. The network analyzer performs automatic jitter-transfer characteristic measurements (see Fig. 2). Measurement accuracy is assured because the network analyzer works as a modulation signal source, and as the selected level meter required when measuring jittertransfer characteristics.

While standards have been approved for accurate measurement of OC-192/STM-64 transmission systems, the ITU-T is still reviewing recommendations for 10-Gbit/sec-circuit analysis.

The described jitter analyzer is also useful for measuring 10-Gbit/sec circuits. Because it supports up to 80-MHz jitter bandwidth and has an internal clock corresponding to 10-Gbit/sec bit rates at its core, the system can perform jitter measurements with much greater accuracy than existing systems. Therefore, despite the lack of approved standards, accurate jitter measurements can be performed on high-speed circuits. To include FEC, other clock rates would be used at its core.

The evolution of jitter-test instrumentation will certainly continue as transmission systems increase in capacity and speed. As the wavelength transmission window in DWDM systems is extended to the long- (L-) band, and carrier rates reach OC-192 and OC-768 (40 Gbits/sec), a single fiber will have the ability to support a phenomenal level of traffic. The final recommendations expected by the ITU-T on jitter standards for STM-64, the European equivalent to OC-192 transmission systems, will hasten this evolution. The ITU-T continues to conduct meetings in an effort to finalize its recommendations.

In addition to jitter measurements at OC-192, there is a need to do SONET analysis, bit-error-rate testing, optical performance OSNR, and wavelength measurements. Analyzers will have to support jitter evaluation up to 80 MHz. Indeed, jitter evaluation may become the most important testing parameter for WDM and DWDM systems because of their high capacity, diverse traffic, and speed. It's still hard to accept that all those e-mails, files, and Web traffic is transmitted over a single fiber that is 10 microns in diameter.

Graham Sperrin is marketing manager for Anritsu's North American operation based in Richardson, TX. He earned a BS degree in electrical engineering and is a chartered engineer of the Institute of Electrical and Electronics Engineers (IEEE).