March 25, 2003--The demise of OMM Inc. does not bode well for optical Micro-electromechanical Systems (MOEMS) vendors, particularly those targeting the telecom market. Their future success may depend on devising subsystems for use in other applications and market sectors. 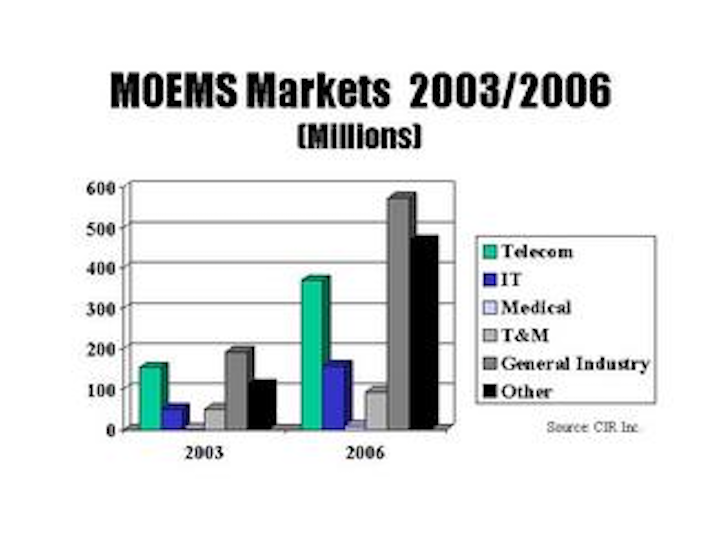 March 25, 2003--The demise of OMM Inc. does not bode well for optical Micro-electromechanical Systems (MOEMS) vendors, particularly those who develop subsystems for the telecom market. In a teleconference held last week, Lawrence Gasman, president and chief components analysts at CIR Inc. (Charlottesville, VA), asserted that the vendors' focus on the telecom sector "was not only misguided, but should be abandoned completely now." Their continued success may depend on devising subsystems for use in other applications and market sectors.

MOEMS were first tapped for their potential to enable highly scalable optical switches. At the height of the telecom bubble, some predicted the optical switch market could net billions, but that market never materialized. Only a handful of optical switches are actually shipping today--and only to a very limited number of service providers, admits Gasman.

There was also hope that the Reconfigurable Optical Add/Drop Multiplexer (ROADM) market would take off and that MOEMS would be one of the platforms on which those devices would be built. However, the ROADM market has been hurt by the overall telecom slump, the decline of the CLECs--ROADMs had been used to pass traffic to alternative carriers--and the relatively slow growth of wavelength services. As such, service providers are only deploying ROADMs in very limited quantities.

MOEMS were also expected to play a key role in tunable lasers and tunable filters, but again, predictions of billion-dollar markets have not come to fruition.

Finally, says Gasman, the demise of OMM Inc., the brand leader in MEMS-based optical switching, is "not an encouraging development."

So what is a MOEMS subsystem vendor to do? "A lot of companies are talking about diversifying out of telecom, and I think that makes sense to an extent," asserts Gasman. "The only thing that I'd say is that sometimes it's easier said than done. It's not just a matter of technology; it's also a question of marketing and business characterization issues. It's a long way from knowing how to get your laser through the Telcordia specs to getting through the health regulations with regards to surgery and related applications," for example.

That said, the folks at CIR believe there will be increasing opportunities in the following sectors:

Product diversification will be a competitive advantage in the future. "The MOEMS industry is and will continue to be highly fragmented in a number of ways," explains Gasman. "That puts the onus on companies at all levels of the value chain to think about how they can squeeze more volume out of what they have--which will lead to thinking about technology platforms that can be applied across several different industries. Perhaps you have a product that can be used in telecom but can also be used in some kind of sensor device or some kind of display device," he suggests. "That seems like the kind of thinking that's going to have to occur before volumes can be achieved and prices pulled down."

For vendors who are already established or are hoping to enter the telecom market, CIR analysts have a few suggestions. One area that has received a lot of attention but has yet to be commercialized is the integration of MOEMS and Planar Waveguide Circuits (PLCs). Unfortunately, says Gasman, some of the more visible experiments have failed--but not necessarily because the technology is unsound. The collaboration between Nanovation and Motorola, for example, came to an end when Nanovation went out of business and Motorola moved in other directions. And the partnership between OMM and Lightwave Microsystems has been dissolved now that both companies have exited the market. That said, it remains an idea worth exploring.

Packaging is another area that deserves attention. "Depending on who you talk to and on particular applications, packaging can account for up to 90% of the cost of a MOEMS device," reports Gasman, "so anything that can be done to reduce the cost of packaging will have an enormous impact on the cost of the MOEMS device. The potential for pushing up volume by proven packaging is very significant. Also, packaging is pretty much where all the problems occur in MOEMS devices; so again, it's another way of making MOEMS more reliable. What's been suggested is that one way to deal with this issue is standardization--but standardization within certain groups of applications," he explains. "I think we're going to see more and more emphasis on standardization and MSAs for MOEMS in the next few years."

The cost of the typical MOEMS subsystem will also have to fall substantially. "What we're finding in telecom is that you have to offer a fairly significant reduction in prices to get customers to switch over to new products and new suppliers," says Gasman. "You can't just come in and say, 'I'm 5% less than your current supplier.' There are so many design and redesign issues that need to be dealt with that 5% isn't going to be enough to motivate the customer. You're going to have to see about 30-35% price reductions before you can break into new accounts."

Finally, companies should try to avoid the PR hype so prevalent during the optical heyday. "PR will have a role in the future of the MOEMS industry and in optical more generally, but hopefully not such a hyped up role," says Gasman. "At this point, PR has a useful role to play--basically to signal that you intend to treat the MOEMS market seriously and you plan to stay in the market. That signals to your competitors that they can expect a fight, but it can also inform your customers that you are a serious player--and in the long term, that might help you win accounts." 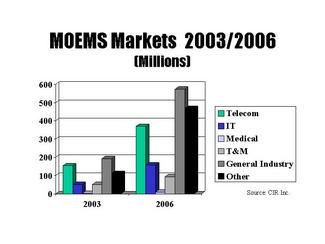