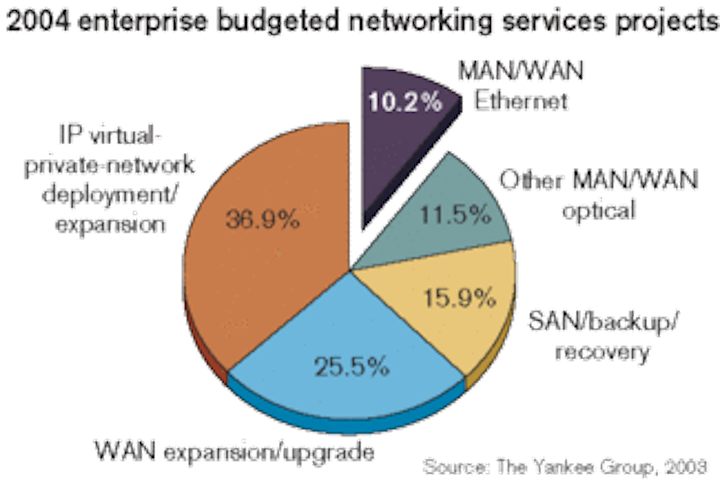 Metro- and wide-area Ethernet services are capturing wallet share in this year's enterprise budgets. A recent Yankee Group survey of U.S.-based enterprise communications spending found that 30% of respondents in the study have networking services projects budgeted for 2004. Of those same respondents, 10% specified MAN/WAN Ethernet as a budgeted networking services project this year (see Figure 1). 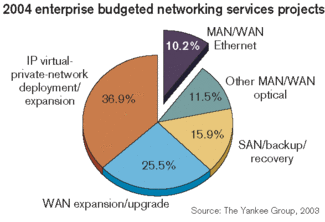 Figure 1. A survey of U.S.-based enterprise communications spending finds that 30% of respondents have networking services projects budgeted for 2004. Of those respondents, 10% specified MAN/WAN Ethernet as a budgeted project this year.

The Yankee Group forecasts U.S. MAN/WAN Ethernet '04 service revenues at $504 million with a CAGR of 58.2% by the end of 2007, which values the Ethernet services market at 8.9% of the combined '07 $22.4-billion forecasted revenues of its primary competition: Frame Relay (FR), ATM, and private line (see Figure 2). 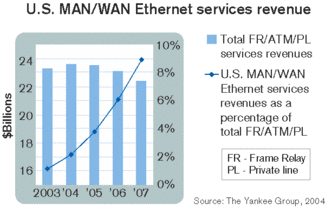 Figure 2. The Yankee Group forecasts U.S. MAN/WAN Ethernet 2004 service revenues at $504 million with a CAGR of 58.2% by year-end 2007. The Ethernet services market is expected to represent 8.9% of the combined '07 $22.4-billion forecasted revenues of its primary competition: Frame Relay, ATM, and private line.

Although service revenues for MAN/WAN Ethernet are still small compared to other traditional data-networking solutions, many carriers experienced double-digit Ethernet revenue growth over the last two years and some estimate triple-digit growth this year. Verizon, for example, saw its Ethernet revenues double from 2002 to 2003 and expects this trend to strengthen.

The Yankee Group's "2003 Metro Ethernet Survey" found that Ethernet is cannibalizing a wide range of traditional data-networking alternatives, most notably private line. Of the 150 current metro Ethernet users surveyed in the study, 57% have used Ethernet to replace a private line service. Since Ethernet services are typically priced at a 25%–35% discount to private line, they are an attractive low-cost-per-megabit solution in high-bandwidth environments.

Ethernet cannibalization of traditional data-networking alternatives is not the only factor contributing to its growth, however. In fact, a large portion of today's Ethernet consumption is to augment existing networks by supporting increased bandwidth requirements and connectivity between sites.

Much of this trend is driven by demand for network convergence and support of new business applications, including voice over IP and IP virtual-private-network (VPN) access. In addition, industry regulation for data replication, archiving, and network resiliency specified by legislation such as the Health Insurance Portability and Accountability Act of 1996 and Sarbanes-Oxley are key drivers for Ethernet within specific vertical segments.

These drivers are evident in Ethernet's success within healthcare and financial markets. Con Edison Communications, for instance, is experiencing 30% of all new sales originating from Ethernet, and 80% of those sales are to banks and financial institutions.

In healthcare, the explosion of new applications such as picture-archiving and communication systems, physician order entry, and electronic patient records that require high performance, large bandwidth, and increased connectivity play a key role in this market's Ethernet demand.

Orlando Regional Healthcare, for example, is just one of many healthcare organizations that have implemented a metro Ethernet solution to augment their FR network, which was unable to support digital-imaging applications and business continuity and disaster recovery requirements.

Education is also an important vertical segment for Ethernet services. Verizon, for instance, has gained significant traction with their Transparent LAN Ethernet Service in the K-12 public school systems. Distance learning, Internet access, and content-sharing are top applications deployed over Ethernet within this market. 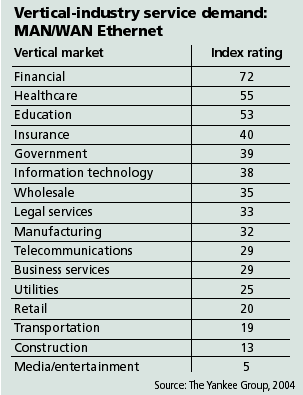 A market trend occurring with Ethernet is its transition from a best-effort service to a service with high reliability and carrier grade service-level agreements such as those available with emerging Ethernet over SONET solutions. As this trend continues, vertical markets like finance, healthcare, insurance, government, education, and legal services will continue to leverage Ethernet to support more of their networking needs, increasing its cannibalization of other services.

A second trend with Ethernet is its use as access to a request-for-comment RFC 2547 IP VPN service. The onslaught of Layer 3 MPLS VPN products on the market from every major carrier introduces the ability to deliver an access-agnostic solution to the enterprise. That allows the use of Ethernet as an onramp to an IP VPN at sites with high-bandwidth requirements while still providing other sites access to the VPN via FR, ATM, DSL, or other methods. This capability broadens the addressable market for Ethernet in the enterprise.

Although Ethernet is cannibalizing its traditional data-networking counterparts, primarily private line, it is predominantly being used to augment existing networks in support of new applications and business requirements. But as Ethernet continues its evolution into a carrier grade service with increased features, functionality, product availability, and service reliability, its cannibalization of FR, ATM, and private line revenue streams will deepen.

The big question for Ethernet: Will its role in the enterprise be primarily network access for Layer 3 services rather than as a standalone Layer 2 solution?