Optical-networking mergers and acquisitions: Is the timing right? 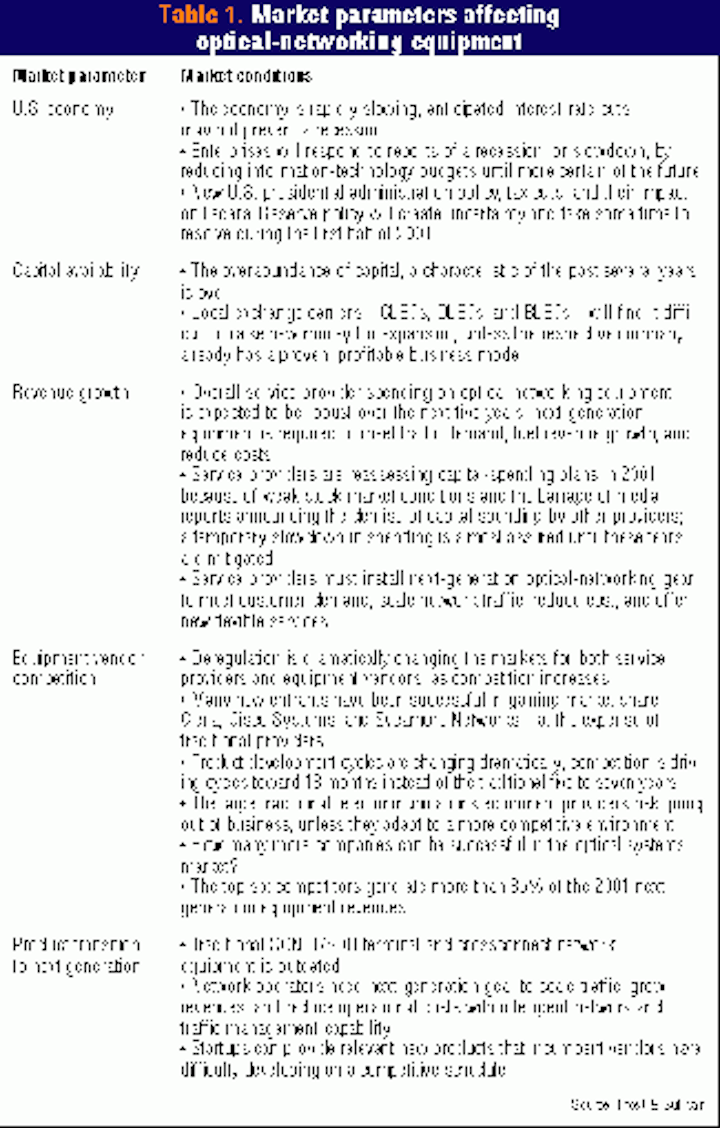 In the current financial and product market environment, established companies and startups can benefit from strategic mergers and acquisitions.

Venture capitalists have been pouring money into optical-networking startup companies, anticipating new-product acceptance within this rapidly growing market. These investors are encouraged by the need for revolutionary design and architectural changes in next-generation optical-networking equipment because it provides an opportunity for companies to develop innovative products and capture market share against slower-moving competitors. The relative timing of three events makes now a good time for many companies to consider strategic changes such as mergers or acquisitions.

Optical-networking products are rapidly changing. The transition of optical-networking equipment from traditional SONET/SDH gear to next-generation systems is underway. Thus, the architectures and functionality of future networks is being redefined. This climate offers the opportunity for startup companies to provide innovative new products on accelerated schedules. Larger established companies may fail in their product transitions. These traditional equipment providers must convince customers their company and products will be relevant in the future as well as generate profits in the near term. New entrants are capturing significant market share of next-generation optical-networking equipment at the expense of traditional telecommunications providers. Enterprise equipment providers are successfully migrating vertically into service-provider equipment markets, which is particularly true in the metropolitan-area networks (MANs) and access networks.

Established companies need new feature-rich products and access to more optical engineering talent. Startup companies need access to customers and capital to survive and benefit their shareholders. Under current conditions, many startup companies will become affordable for stock-based acquisitions this year. While established companies have seen their market values decline 40% to 60% off their year 2000 highs, startups are likely to experience a much greater discount due to waning investor interest, weak market conditions, and the vast number of companies wanting to have an IPO. 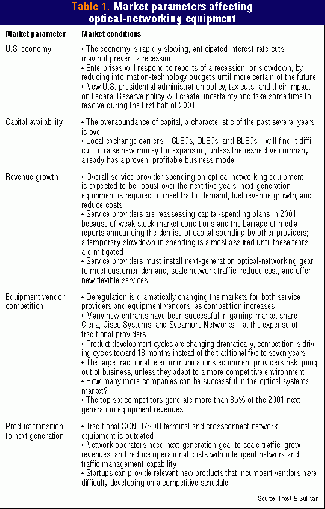 The current environment makes mergers and acquisitions very attractive for both parties. The financial and market conditions creating this opportunity are identified in Table 1.

Revenue for optical-networking equipment has been increasing 25%-30% per year over the past several years. The global strength in equipment spending mirrored the robust U.S. economy, which had 3%-4% growth in gross domestic product (GDP). Low inflation gave enterprises and networking companies confidence that strong sustainable growth could continue.

This confidence has been undermined now that the economy is decelerating at a dramatic pace. Spending on capital equipment will slow in 2001 until an economic "soft landing" appears and GDP expansion is accepted as the general trend. Economic recession is also a real possibility for 2001. Indeed, economic deceleration, a falling stock market, and the erosion of consumer confidence are now established trends. 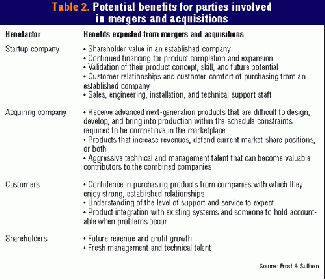 The financial markets must also digest the changes implied by a new U.S. presidential administration. The market has become accustomed to the predictability of the Clinton administration's policies, a Republican Congress, and their interaction with the Federal Reserve. The policies of President George W. Bush must be stated, the prospects and impact of expected proposals and tax cuts digested, and the Federal Reserve interest-rate policies understood within the context of an economic slowdown. While nothing harmful is expected, financial markets prosper when economic trends and policy are predictable. It will take a little time for financial markets to establish a consensus vision of the future.

Until market enthusiasm returns, IPOs will be very difficult, if not impossible. Investors must decide if continued financing of late-stage companies is warranted considering the spending slowdown, competitive environment for customers, and stock market weakness. Their alternative is to find a buyer that best positions their company's product to succeed. It is likely that full-term vesting schedules will be required. A strong acquiring company is advisable in this environment.

The optical-networking equipment market mirrors the newly deregulated service-provider market. Traditional vendors are struggling to maintain market share against an onslaught of competition from new entrants and enterprise crossover vendors- companies migrating vertically into service-provider markets. Nortel Networks has been successful so far in transitioning its corporate culture, decision-making processes, product mix, and product cycles to maintain a market-leading position in next-generation systems. Lucent Technologies is struggling to maintain its leadership position in the systems market. New entrants such as Ciena and Sycamore Networks are capturing market share, as are enterprise crossover companies such as Cisco Systems and Redback.

While the next-generation equipment market is young, the "800-pound gorillas" are beginning to emerge. So far, European companies such as Alcatel and Marconi are maintaining their market positions.

As such, it's going to be difficult to convince investors that late-stage startups can capture a large percentage of revenues in the core transport and metro/regional transport and access markets. Investors are already beginning to have second thoughts about how large revenues can grow for Corvis, the hottest optical IPO of 2000. The perception of future company size and growth is what drives a startup's stock valuation.

In spite of economic concerns, service providers must deploy next-generation optical-networking equipment to defend-and expand-service revenues. Installing traditional SONET/SDH equipment locks in high network cost and needless complexity and does not scale. Even if information-technology spending increases are scaled back or flat, network traffic growth will remain substantial. Service providers that do not purchase gear may need to turn away customers.

Operators must continue to install optical-networking equipment and obtain the capital to do so. Generally weak financial markets will restrain this trend in 2001. Service providers will extend procurement schedules where possible until economic confidence is restored. 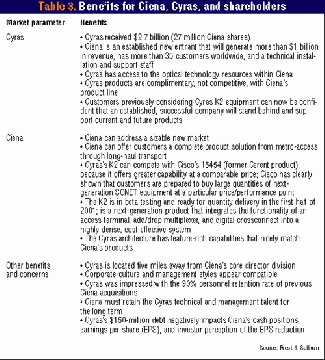 Service providers are transitioning from voice to data-dominated revenue models. This rapid change provides opportunity for startups to produce innovative products and be rewarded for their extraordinary efforts. Startup companies by their nature are innovative and aggressive; they can attract premier technical and management talent and are capable of 18-24-month product cycles.

While operators tolerate and encourage startups to a degree, most want to purchase equipment from established companies. They are motivated to purchase from startups and new entrants only if they can offer substantially superior products compared to incumbent vendors.

The net result of a merger or acquisition is ideally a win-win-win situation for shareholders, the acquirer, and the startup company. Table 2 identifies several of the primary benefits required for an attractive deal. The difficulties of mergers and acquisitions-culture clashes, management and technical distrust, bureaucratic control issues, talent retention, and other related challenges-will not be discussed. Short-term dilution of the acquirer's stock is likely while the startup's product is rolled out. Long-term dilution will result if new revenues and profits never materialize.

A recent example of an acquisition that should substantially benefit all parties concerned is Ciena's acquisition of Cyras. Ciena is a new entrant that grew to $1 billion in 2000 within the core and metro transport markets. The company lacked a metro access/edge product, which limited Ciena's ability to offer large customers a comprehensive edge-through-core solution. The company was also missing out on an exploding market opportunity.

With the Cyras acquisition, Ciena is well positioned to repeat the success Cisco had with its Cerent acquisition. Just as Cisco was able to finish Cerent's next-generation SONET product (now the Cisco 15454) and generate $700 million in revenues last year, Ciena hopes to integrate Cyras's K2 into its product line and capture a large share of Cisco's near-monopoly in this emerging market segment. The Cyras K2 is a carrier-class metro-access product that operates in SONET/SDH networks, offers DS-3 (44.736-Mbit/sec) to OC-192 (10-Gbit/sec) capability, and is competitive with the Cisco 15454. The K2 is a more capable "leapfrog" product, specifically designed for large customers of regional Bell operating companies.

Ciena's acquisition makes sense strategically because it fills a product need. The company also increases its addressable market by $15 billion over the next five years. Table 3 lists the primary benefits of the acquisition for both companies and shareholders.

This acquisition also avoids a challenge that large traditional telecom vendors must often overcome: Ciena does not need to integrate or support any legacy metro-access products. In many merger-and-acquisition scenarios, vendors must stitch together products with completely different architectures and heritage.

Cyras is joining a successful company with a fresh product portfolio. Ciena and Cyras have the opportunity to integrate their development staff. The stock vesting schedules for both the technical staff and management were not accelerated, meaning that Cyras shareholders financially benefit the most if they remain with Ciena until the stock options mature over the next several years. That provides the continuity required to complete and launch the K2 and future products.

Mark Storm is an analyst and program leader for Frost & Sullivan's optical-networking market service (San Jose, CA). He can be reached at mstorm@frost.com.