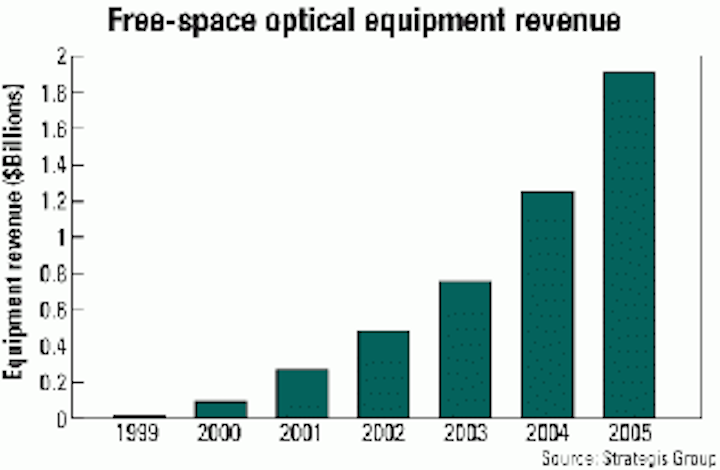 Free-space optics (FSO), an emerging technology that transports information from point-to-point and multipoint via beams of light, is expected to become a strong niche player in the telecommunications industry over the next five years, says a new report from the Strategis Group (Washington, DC). Worldwide FSO equipment revenues are expected to increase from under $100 million in 2000 to $2 billion by 2005 (see Figure).

James Mendelson, a Strategis Group analyst and lead author of the report, believes that the technology has a definite place in the market. Its benefits, including fast deployment time and high capacity, should appeal to both new and established carriers.

"Carriers like Allied Riser and XO Communications may use FSO in conjunction with other technologies to expand their current networks while others, such as Terabeam, see the technology as a means to break into the broadband market," he explains. 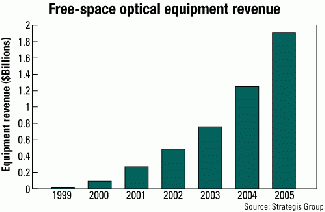 FSO is currently used for a variety of applications, including last-mile connections to buildings, mobile network assistance, network backup, and emergency relief. Last-mile access appears to be the biggest opportunity for FSO, however, as it eliminates the expense of laying fiber to the end user. By 2005, say Strategis analysts, last-mile access will comprise two-thirds of the total FSO equipment market.

The technology still has hurdles to overcome before its widespread deployment. The laser links require a direct line of sight from one to the other, and inclement weather often degrades or prohibits transmission. The biggest obstacle, however, may be convincing people that FSO is a viable technology.

"Many people just don't know or trust the technology," says Mendelson. "With other fixed wireless technologies, such as LMDS and MMDS, people had a strong understanding of radio-frequency technology, because of the wide use of mobile phones. However, lasers still remain somewhat of a mystery. In order to be successful, FSO vendors must first educate the market. Then, they must quickly deliver on their promises of fast, reliable, high-bandwidth connections."

For more information or a copy of the report, "Free Space Optics: Fixed Wireless Broadband," call (202) 530-7600 or visit the company's Website at www.strategisgroup.com.