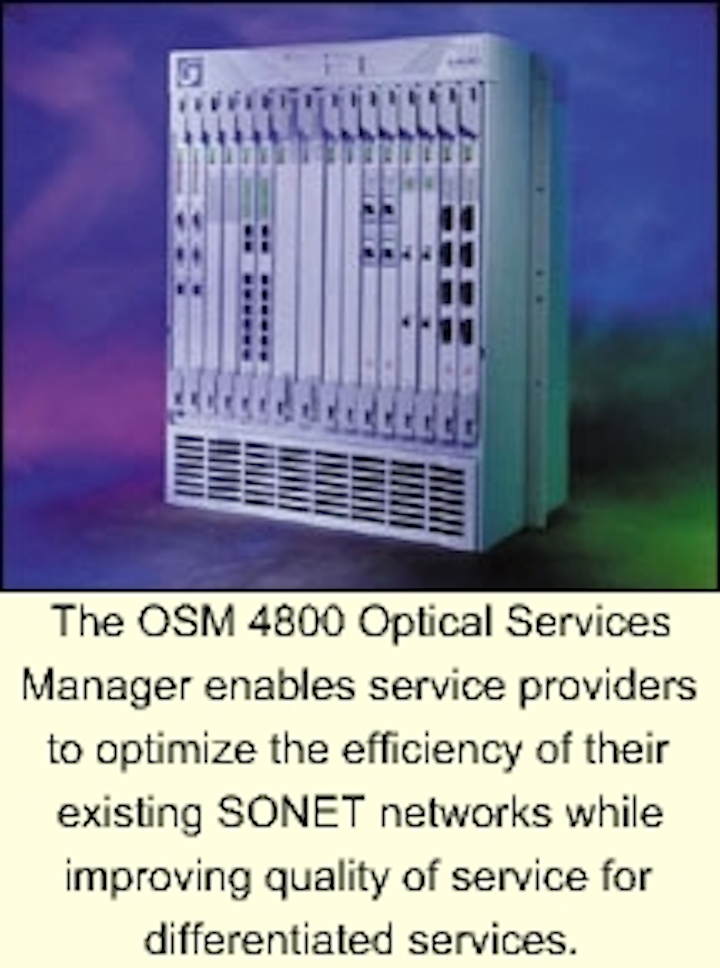 Optimized for time-sensitive voice traffic, widely deployed SONET has fallen short of carriers' demands in today's data-centric world. Given the cost and effort of deploying new fiber, metro carriers require a solution that will optimize their existing SONET infrastructure for bursty data traffic without compromising the quality of service (QoS) they have come to expect from SONET systems. 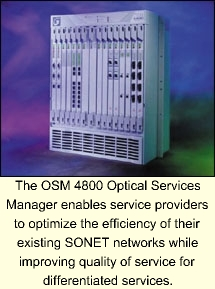 The OSM 4800 Optical Services Manager enables service providers to optimize the efficiency of their existing SONET networks while improving quality of service for differentiated services.

To the rescue is startup Geyser Networks Inc. (Sunnyvale, CA), whose single, integrated platform offers the same functionality currently found in a variety of network elements-including digital crossconnects, SONET add/drop multiplexers, QoS-aware Internet Protocol (IP) routers, Multiprotocol Label Switching (MPLS) routers, Ethernet switches, ATM and frame relay aggregators, integrated access devices, and DWDM. At the heart of the OSM 4800 Optical Services Manager is the company's proprietary FlexBand technology, which provides deterministic traffic control and QoS with the same bandwidth utilization characteristics achieved with packet or cell technology and the traffic management capabilities associated with circuit-switched technology. According to the company, the FlexBand technology transcends the either/or scenario that had been the norm-previously, a carrier could opt for network efficiency, which results in wasted bandwidth, or QoS, which creates dropped packets. The OSM 4800 eliminates that dilemma.

Because the SONET frame format is optimized for time-sensitive T1, T3, and OC-3, -12, -48, and -192 traffic, it is inadequate for bursty data traffic, which cannot be defined in such granular increments. When data traffic is carried over a SONET frame, the total bandwidth waste is "enormous," according to Geyser's vice president of marketing, Kent Novak, and much of the traffic ends up in what Novak calls "the bit bucket." The first part of the twofold FlexBand technology, NxVT1.5 Virtual Concatenation, eliminates this waste by assigning bandwidth to a packet flow in 1.5-Mbit/sec increments, enabling the OSM 4800 to deliver only those network resources needed, both when and where they are required.

Explains Novak, "What we're offering is the ability to take the granularity of those 1.5-Mbit virtual tributaries and concatenate those, so we can make a data pipe of essentially any size you need, within the 1.5-Mbit increments." When the NxVT1.5 pipe is established, it has all the QoS associated with traditional SONET technology, including reduced overhead, jitter, and delay.

The second part of the FlexBand technology, dynamic bandwidth allocation, allows Geyser to change the size of the concatenated virtual tributaries in real time, in 2 to 3 msec. A minimum, average, and peak bandwidth is established for each service. For example, a service with a minimum bandwidth requirement of 2 Mbits/sec will work, on average, at 6 Mbits/sec, with a maximum or peak bandwidth of 10 Mbits/sec. Geyser Networks then sets up the service at 6 Mbits, and when the burst comes through and 10 Mbits are required, the pipe will instantaneously expand to accommodate 10 Mbits. When traffic subsides and 10 Mbits are no longer needed, the pipe constricts to 6 Mbits.

Asserts Novak, "The difference between our solution and others' solutions is that any IP solution can give you that minimum, the average, and the peak, but they cannot, in real time, adjust the size of that pipe."

The OSM 4800 also allows service providers to track the traffic, adjust the amount of bandwidth required, and access this information via the Internet-which results in a tenfold increase in the number of customers and amount of traffic an existing SONET infrastructure can handle, says the company.

"If you think about some of the value propositions being put forth by Enron, Williams Communications, and most recently Aerie Networks, you're really talking about bandwidth as a commodity, and you should be able to broker it and provide it where you need it when you need it," asserts Novak.

At the helm of Geyser Networks is Wu-Fu Chen, whose success rate with startups is enough to inspire confidence in even the most skeptical. Geyser is the only company in his portfolio in which he serves as acting CEO. "What I find sort of interesting," asserts Jennifer Pigg, executive vice president of market research firm Yankee Group (Boston), "is that [the Geyser solution] seems to be a departure from the Wu-Fu Chen strategy of making baby steps." When attempting to break into the carriers' market, she contends, the best strategy is to give them incremental improvements in the way they currently do business; don't provide too dramatic a departure from the way they currently run their networks. "I'm not saying that the Geyser strategy is a very fundamental change, but it is something new to the carriers. It is something that they really haven't heard a lot about before," she says.

Will the majority of vendors transition to this type of strategy? "It's hard to say," admits Pigg, who does acknowledge that Geyser is ahead of the curve. "I am just now beginning to see vendors who are emerging with a strategy of this nature," she says, citing Dynarc and NetInsight, whose Dynamic Synchronous Transfer Mode technology has "more similarities than dissimilarities to what the [Geyser] people are doing." Cisco Systems also has a similar technology, Dynamic Trunking Protocol, which it uses for MPLS QoS mapping.

Despite being ahead of the curve, Geyser's OSM 4800 is not so radical a departure from other metro and core strategies that it would immediately render them obsolete. As Pigg contends, at least for the next two to three years, carriers will continue to deploy a combination of different solutions.