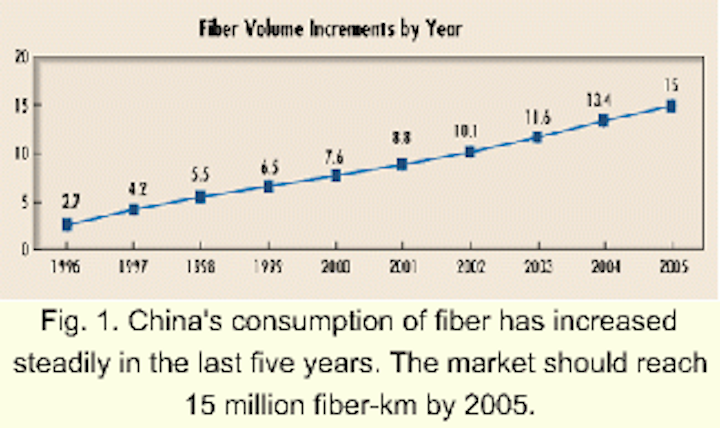 A new commitment to upgrading its telecommunications infrastructure has made China an attractive market for fiber. Local manufacturers are racing to keep pace with demand.

With a gross national product growing at a rate near 10% and a population of more than 1.2 billion, China represents vast market potential for optical communications. The dramatic changes underway in the country's telecommunications market are spurring demand for significant increases in capacity per fiber and for the rapid provision of bandwidth, which will continue to drive demand for optical fiber and fiber-optic cable.

China's fiber-optic industry is expanding rapidly; in fact, the fiber-optic market in China has been on an upward growth path for over a decade. The Internet is the main driver of this traffic increase. By the first half of 1999, the number of Chinese Internet users had exceeded 4 million. It is estimated that the figure had reached 8-10 million by the end of the year. 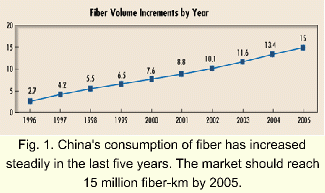 Fig. 1. China's consumption of fiber has increased steadily in the last five years. The market should reach 15 million fiber-km by 2005.

By the end of 1999, China had deployed over 2 million route-km of fiber-optic cable and more than 20 million fiber-km of optical fiber. Over 220,000 km of the installed fiber-optic cables are national and interprovincial backbones. The 1999 annual demand for optical fiber is projected to have been over 6 million km. Figure 1 shows the steady growth of optical-fiber deployment over recent years.

In the past several years, the market share of domestic fiber producers has risen steadily. In 1999, these manufacturers have captured more than 40% of China's optical-fiber market. Growth forecasts indicate that local product will increase its market share over the next few years. Table 1 represents an overview of China's fiber-optic industry, outlining the 1998 production capacity of the main domestic fiber-optic manufacturers as well as a forecast of 1999 activity. 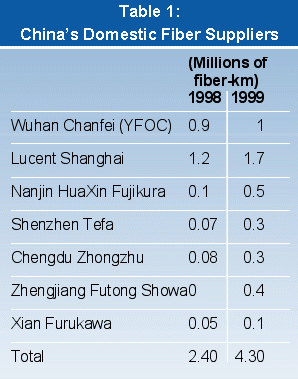 In 1998, China imported 53% of its optical fiber (about 3.2 million km). Even as domestic output grows, nondomestic fiber still takes a large market share. Thus, China still offers tremendous opportunities for foreign companies especially those who make large-effective-area fibers for dense wave length-division multiplexing (DWDM) applications. That said, market share for local optical fiber will rise from 40% to 60% at the current speed. Forecasts show that the market share for imported fiber will decrease to 20%.

As mentioned previously, the optical-communications market in China is growing significantly. Deregulation is boosting the telecommunications industry in China. The demand of the Internet market will lead to the sustained growth of the optical-fiber market in China in the next decade. The Ministry of Information has decided to upgrade communication capacity for trunks by adopting the most advanced DWDM technology in the world. The brand new G.655 fiber optics will be deployed for new-build long-haul national trunks in eastern China. Figure 2 shows high-growth segments in fiber deployment over recent years. 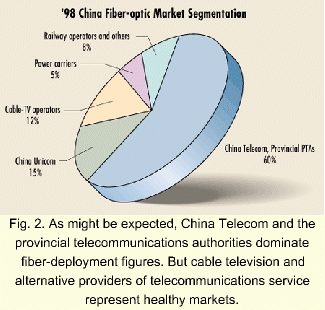 The market for optical fiber and fiber-optic cable in 1998 reached $200 million and $600 million, respectively. The demand for optical fiber is expected to have reached 6.5 million fiber-km in 1999 and should climb to 7.6 million fiber-km this year. Fiber-optic cable made in China can nearly meet the domestic market demand, and thus imports are declining. The market share of imports in 1999 is expected to have been 5% (versus 10% in 1998 and 15% in 1997). However, most of the country's submarine optical fiber and OPGW, as well as part of its ADSS cabling, continue to come from offshore suppliers.

Expanding China's optical infrastructure with OPGW and ADSS technology in the power grid has been placed on the agenda. Today, OPGW and ADSS are widely adopted around China, and their association with optical fiber provides the potential to create high-capacity, reliable optical-communication networks. Power utilities need more telecommunication to manage and monitor the power networks. The demand for OPGW and ADSS cabling will increase to 10% of the total fiber-cable market. 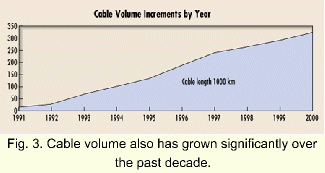 Fig. 3. Cable volume also has grown significantly over the past decade.

Figure 3 shows the trend of fiber-optic-cable deployment in China during 1991-2000. By the end of 1999, China will have finished the construction of over 200,000-km trunks. Available undersea routes include Sino-Japan, Sino-Korea, FLAG, and sea-me-we3. Other undersea networks, such as China-US, APCN, and Project Oxygen, will add to the amount of available capacity. This growth will enable China to be connected with a global telecommunications network.

China Unicom plans to expand its capacity by establishing 10 cable trunks by this year, with a total length of 22,000 km. Among these projects, the China West-Pacific Submarine Cable Project (CWPC) launched by Unicom is the largest telecommunications-line project in China's history. The line starts from Liaoning Dandong in the north to Guangxi Beihai in the south and connects with Beijing in the center. CWPC will link 27 major coastal cities in China, covering China's golden economic zones, with a total length of 7050 km. CWPC will dramatically strengthen China's telecommunications network.

Meanwhile, the Tianjin-Dalian (Yan Tai) submarine cable project also has been put on the agenda, which will set up two direct information channels, one between Beijing-Tianjin and the other with the development zones of the eastern coastal area.

With the advent of innovative optical-networking technology, China is well positioned to accommodate its growing traffic and the demand for an increasing variety of services.

China is paving the way for a next-generation optical network infrastructure to serve the country's customers. The network will blend Internet, data, voice, and video technologies on a scale never before experienced. Undoubtedly, this expansion will provide optical-fiber and fiber-optic-cable manufacturers a huge potential new opportunity.

Zhou Chun is active in China's fiber-optic market, most recently as purchasing supervisor at Alcatel Shanghai Optical Fiber Cable Co. Ltd. He can be reached at zhouchun@shtel.net.cn.