We take a look back

Lightwave published its first issue in January 1984, which means we've now reached the ripe old age of 30 (which, in these days of the Internet, is about 150 in magazine years). 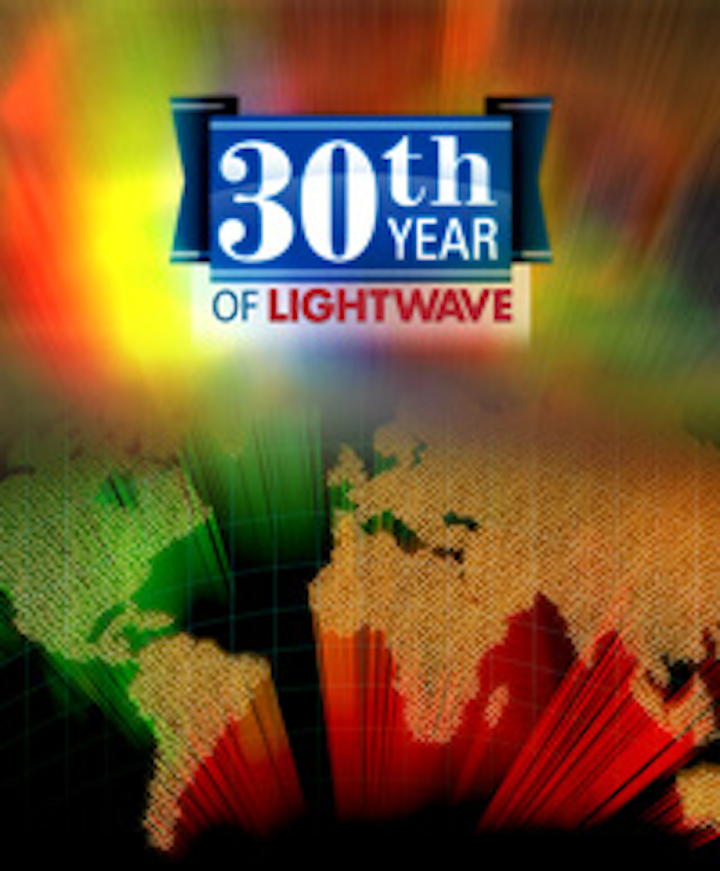 Lightwave published its first issue in January 1984, which means we've now reached the ripe old age of 30 (which, in these days of the Internet, is about 150 in magazine years). That makes us old enough to know we're not supposed to carouse all night, but young enough to do it on occasion anyway (like, say, during the Networking Reception at the upcoming inaugural Lightwave Optical Innovation Summit July 14–16 in Austin, TX; see you on 6th Street). It also makes us old enough to wax nostalgic about the high points we've experienced and to be rueful of our missteps, both of which are addressed in the following pages of this special section.

"Divestiture: new opportunities for Lightwave" proclaimed the headline of that first issue, which no doubt referred to the potential of a bright future for both the fiber optics industry and the magazine itself in the wake of the breakup of AT&T. The late Howard Rausch founded the publication, with Dr. John P. Ryan as editor-in-chief. Ryan used the editor's chair as a springboard from which to launch Ryan, Hankin, Kent, one of the premier market research firms of the bubble era. (The business is now part of Ovum, while Ryan is CEO of LCD designer Pixel Qi.) Rausch, meanwhile, managed to keep the new venture afloat before selling it to PennWell Publishing Co., now PennWell Corp., in 1990. He died in 2005.

Numerous people have filled the publisher and editor chairs since Rausch and Ryan. The way we engage our audience has changed significantly over the years as well – our printed publication has been replaced by an e-zine, supplemented with the website, newsletters, videos, podcasts, editorial guides, and our first major event shamelessly plugged above. But regardless of the names on the door or whether we're producing ink or electrons, the staff at Lightwave has done its best to chronicle what the optical communications industry has done with the opportunity described on the very first page Lightwave published. We look forward to the future, but first let's take a look back…