Sales of optical network hardware slipped 10% sequentially in the third quarter of 2015, according to the most recent tally from IHS (NYSE:IHS). Gains in North America were not enough to offset declines in the Europe/Middle East/Africa (EMEA) and Central America/Latin America (CALA) regions, according to the market research firm. 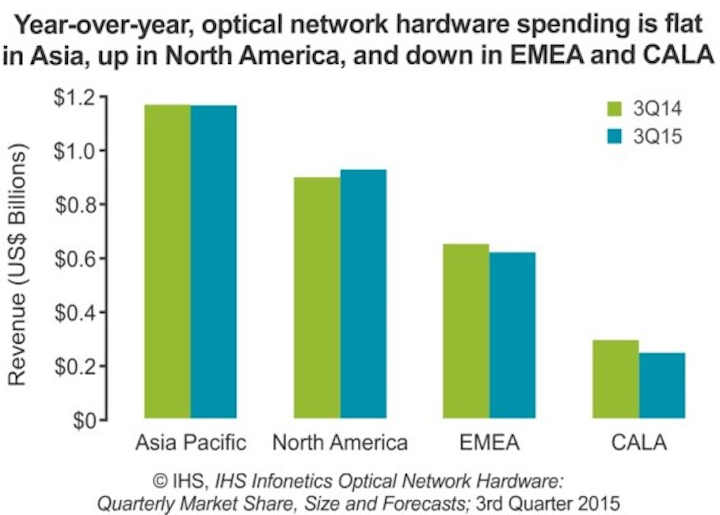 Sales of optical network hardware slipped 10% sequentially in the third quarter of 2015, according to the most recent tally from IHS (NYSE:IHS). Gains in North America were not enough to offset declines in the Europe/Middle East/Africa (EMEA) and Central America/Latin America (CALA) regions, according to the market research firm.

The quarter's shrinkage to $2.95 billion dollars also put it behind the year ago quarter by 1.7%. The disappointing results followed a 21% jump in fiber-optic network hardware sales in the second quarter (see "Optical network system spending increases sequentially in second quarter 2015: IHS").

Sales in North America grew 3% sequentially, while Asia Pacific's spending was essentially flat. The slowness in EMEA may be short-lived, IHS believes.

"The previous three quarters' results for EMEA indicated the first reversal of poor optical spending since 2009. However, third quarter results are less favorable, with a 5% year-over-year decline. We assume this is a short-term setback and the recovery will continue. However, we will monitor this closely," said Alex Green, senior research director for IT and networking at IHS. Green, apparently, is filling in for Andrew Schmitt, former research director for carrier transport networking at IHS, who has left the company to start his own firm, Cignal AI.

Looking forward, any growth the optical network market enjoys this year will come largely thanks to WDM sales, IHS predicts. Spending on WDM equipment grew 4% year-on-year in 3Q15, and will exceed $6.8 billion annually by 2019.

The demand for SONET/SDH gear will continue to head in the other direction, meanwhile, with sales declining from $2.17 billion in 2014 to just over $500 million by 2019.