LightCounting says in a newly updated report on "High-Speed Datacenter Optical Interconnects" that mega-scale data center operators began volume deployments of 100 Gigabit Ethernet (100GbE) optical transceivers in the first half of this year. The market research firm expects strong demand in the second half -- and even stronger pull in 2017. 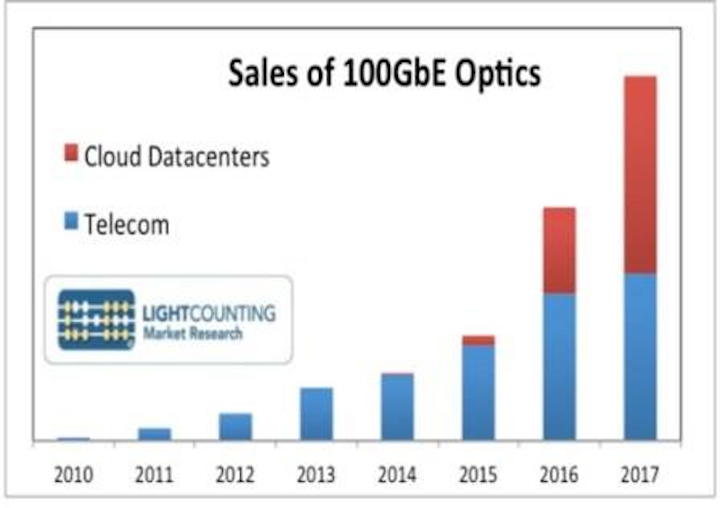 LightCounting says in a newly updated report on "High-Speed Datacenter Optical Interconnects" that mega-scale data center operators began volume deployments of 100 Gigabit Ethernet (100GbE) optical transceivers in the first half of this year. The market research firm expects strong demand for such optical modules in the second half -- and even stronger pull in 2017.

The hunger for 100GbE optics has created shortages of such high-end optical components as EML and DFB laser chips, LightCounting notes. Such constraints could limit 100GbE market growth this year.

The demand for 100GbE in telecom applications remains robust as well. As the figure above illustrates, such applications had provided the primary demand engine in previous years, with large telecom equipment suppliers such as Huawei dominating the supply chain. However, data center requirements should soon eclipse those of telecom operators, LightCounting believes (see also "Web 2.0 companies will buy a lot of optical modules says LightCounting").

That said, shipments of 40GbE data center modules also remain strong. Leading cloud companies reduced purchases of such transceivers late last year – but 40GbE demand rebounded in the first half of 2016. LightCounting believes 100GbE supply constraints may be a cause.

The success of 40GbE, which was denigrated in some quarters as an intermediate step from 10GbE to 100GbE, bodes well for future "intermediate" data rates as 200GbE, LightCounting expects. In fact, the market research firm says it has just increased sales projections for 200GbE optics in 2018-2021.

The updated report leverages historical data on shipments of Ethernet and Fibre Channel interface modules as well as market analyst research to make projections for sales of these products in 2016-2021. The report provides forecasts for more than 50 product categories, including 10GbE, 25GbE, 40GbE, 50GbE, 100GbE, 200GbE, and 400GbE transceivers, sorted by reach and form factors. It also provides a summary of the technical challenges faced by 100GbE transceiver suppliers.