MARCH 4, 2008 -- Investment in new broadband technologies such as FTTx and DOCSIS 3.0 and the growing breadth of broadband entertainment content are key market drivers. 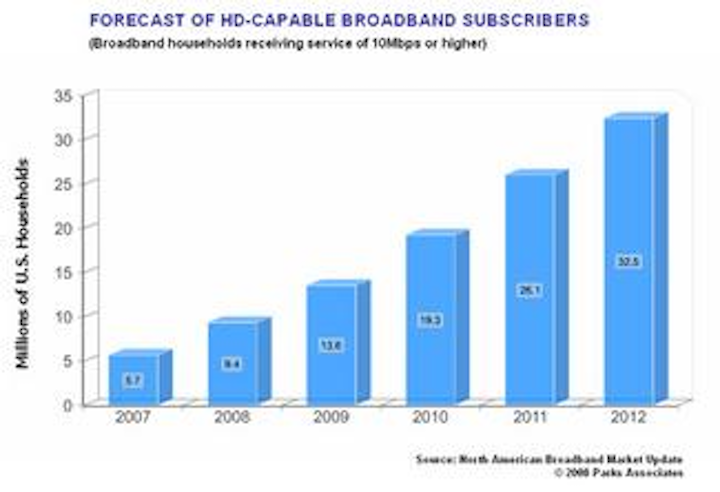 MARCH 4, 2008 -- By 2012, close to 33 million U.S. households will have broadband services with speeds of 10 Mbits/sec or higher, capable of streaming high-definition video, reveals Parks Associates' (search for Parks Associates) "North American Broadband Market Update." At year-end 2007, 5.7 million or 9% of U.S. broadband households had such speeds.

"Until recently, telecom operators' aggressive deployment of deep fiber services and the competitive reaction from cable MSOs fueled the growth of high-bandwidth broadband services," explains Yuanzhe (Michael) Cai, director of broadband and gaming at Parks Associates. "As consumer excitement over pure bandwidth subsides, however, service providers will have to deliver appealing, bandwidth-intensive, value-added services such as HD video streaming and content placeshifting in order to retain customers and increase ARPU," he adds.

Investment in new broadband technologies such as FTTx and DOCSIS 3.0 and the growing breadth of broadband entertainment content are key market drivers. However, service providers' missteps in bandwidth management practices, uncertainty around "network neutrality," and the contentious relationship between facility-based broadband service providers and over-the-top Internet companies may slow progress.

"If high-bandwidth broadband services fail to reach mass-market consumers, the United States may lose its competitive edge in the next round of technology innovation," Cai cautions. "Such a scenario would be unpleasant." 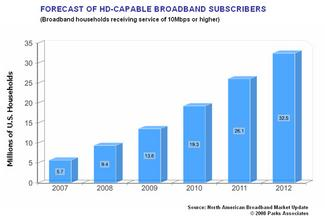 By 2012, close to 33 million U.S. households will have broadband services with speeds of 10 Mbits/sec or higher.
Latest in Market Research