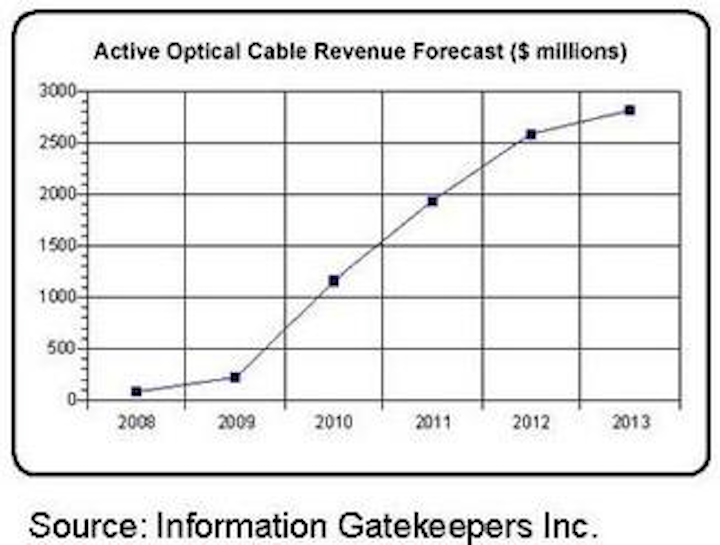 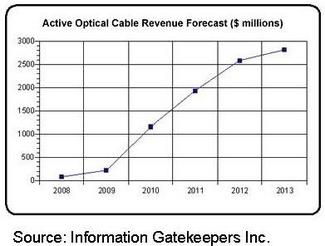 DECEMBER 16, 2008 â�� According to Information Gatekeepers' (IGI; search for Information Gatekeepers) new report, Active Optical Cables Market Analysis 2009, cumulative active optical cable (AOC) revenue is expected to exceed $8.5 billion from 2009 through 2013 just for the application segments the report tracks. Single-year revenue is expected to grow from the present-year level of less than $100 million to over $1.1 billion in 2010, then up to over $2.6 billion by 2013. As additional application segments are included in the overall market, the total revenue numbers can be expected to increase substantially over these conservative figures, the company suggests.

Total AOC counts identified in this report should exceed 2 million units in 2009, growing to over 75 million units by 2013. Growth in the overall AOC forecast should generate better supplier cost efficiency both at the AOC OEM cable providers and with their underlying material supplier communities, the research firm suggests.

Emphasis was given to ones with products using digital electronic interfaces running either at or above 5 Gbps, as well as those demanding extended cable lengths beyond 2-5 meters at this speed, according to IGI.