Sales strength in Asia and the Europe/Middle East/Africa (EMEA) region battled unexpected softness in North America to determine the fate of optical hardware systems vendors in 2017, according to the latest "Optical Hardware Report" from Cignal AI. The former won out, as optical network systems sales tallied just over $13 billion in 2017, up 3% from 2016. 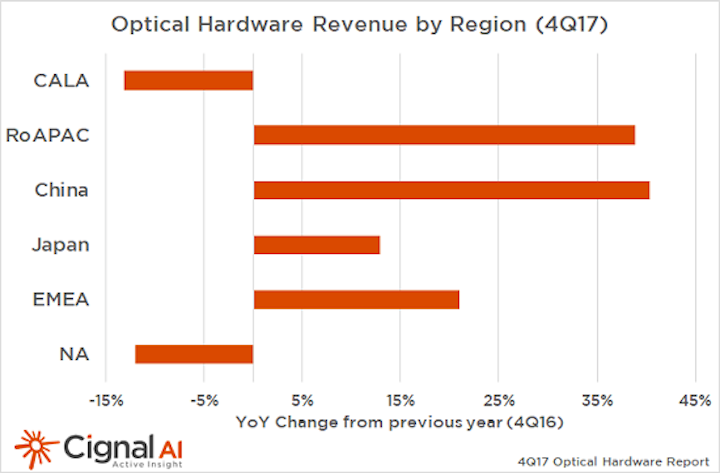 Sales strength in Asia and the Europe/Middle East/Africa (EMEA) region battled unexpected softness in North America to determine the fate of optical hardware systems vendors in 2017, according to the latest "Optical Hardware Report" from Cignal AI. The former won out, as optical network systems sales tallied just over $13 billion in 2017, up 3% from 2016.

"One of the biggest surprises in 2017 was massive spending growth in China. Despite slumping purchases from component manufacturers, Chinese optical vendors Huawei and ZTE reported record levels of revenue. A strong component sales rebound should be expected if this divergence was a result of excess inventory," said Andrew Schmitt, lead analyst for Cignal AI.

Conversely, declines in spending by incumbent, cloud, and colocation service providers (see "Cloud and colo optical spending takes a 1H17 dive: Cignal AI") as well as what the market research firm described in a press release as "brutal" pricing for 200-Gbps ports combined to depress the North American market. Cignal AI pointed to lower spending by AT&T and Level 3/CenturyLink as salient in this context. That said, "the sustained weakness in the North American market should reverse in 2018 as pricing pressure stabilizes," Schmitt added.

The fourth quarter of 2017 saw significant strength in the EMEA market, Cignal AI reports. Huawei, Nokia, Ciena, Cisco, and Infinera reaped the most benefits in this region, according to the report. Alongside Huawei and ZTE, Nokia and Ciena enjoyed a strong quarter overall, thanks in large part to the popularity of their metro WDM systems and submarine line terminal equipment (SLTE).

Cignal AI's quarterly "Optical Hardware Report" covers optical equipment revenue across all regions and equipment types. The report includes shipment information and guidance from individual equipment companies; it also forecasts spending trends in each region and for each equipment type.