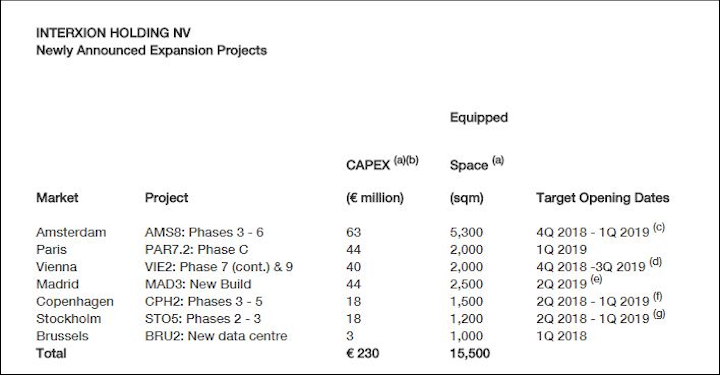 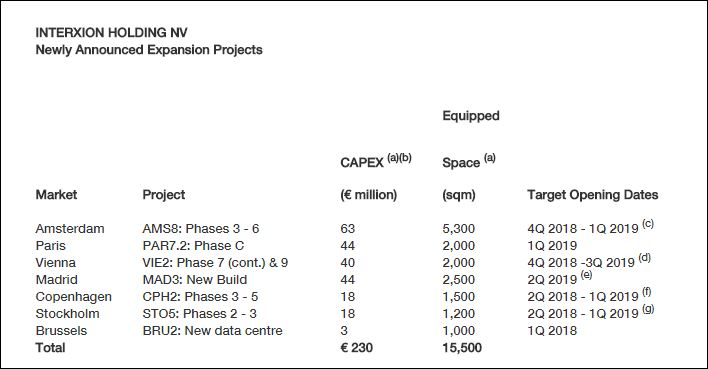 Details of the Interxion capacity expansion in seven European cities

The European provider of carrier and cloud-neutral colocation data center services says it has added to its Amsterdam land bank and opted to acquire the MAD3 property to support its expansion in those two markets. All of the expansion projects will be funded through a combination of existing and internally generated cash, along with committed credit facilities, says the company.

The Amsterdam real estate deal netted approximately 22,000 square meters of land adjacent to Interxion's AMS8 facility, as well as the associated power, the company says. Interxion now will finish the remaining four phases of AMS8, for a total of about 5,300 square meters of equipped space and 10 MW of customer available power when the build-out there is complete. According to the company, the opening of the first two phases is scheduled for 4Q 2018, and the opening of the final two phases is scheduled for 1Q 2019. The capital expenditure associated with the remaining phases of AMS8 is expected to be nearly 63 million euros.

Meanwhile, Interxion will finish the remainder of PAR7.2 in Paris by adding 2,000 square meters of equipped space and 4 MW of customer available power, along with upgrading the existing PAR7 power infrastructure. The opening of the new space is scheduled for 1Q 2019, and the company plans to spend about 44 million euros in capital expenditures on the cumulative expansion in Paris.

Interxion says it will add approximately 2,000 square meters to the 1,600 square meters under construction in Vienna, the latter of which is scheduled to be delivered by 3Q 2018. Delivery of the additional space is scheduled for 3Q 2019, and Interxion expects to spend about 40 million euros in capital expenditures on the incremental capacity.

Interxion will construct its third Madrid data center in one 2,500 square-meter phase with 5 MW of customer available power when the build-out is complete. MAD3 is located near Interxion's current campus on land that it plans to purchase in 1Q 2018, the company says. Interxion anticipates an opening in 2Q 2019, and plans to connect MAD3 redundantly to the existing and proprietary campus fiber ring to offer access to over 80 carriers, ISPs, CDNs, and the ESpanix and DE-CIX internet exchanges. Including the property purchase, Interxion expects capital expenditures associated with MAD3 to be nearly 44 million euros.

Interxion says it will expand CPH2 in Copenhagen, with 900 square meters scheduled to open in 2Q 2018 and 600 square meters in 1Q 2019. The capital expenditure associated with these builds in CPH2 is expected to be approximately 18 million euros.

In Brussels, Interxion will add BRU2, including approximately 1,000 square meters of equipped space and 1 MW of customer-available power. Availability of the new facility is scheduled for the first quarter of 2018, and connects directly to the existing facilities at BRU1 through dedicated fiber to deliver access to over 100 connectivity providers, and the BNIX, NL-ix, AMS-IX, LINX, and DE-CIX internet exchanges. The company plans to spend about 3 million euros in capital expenditures on BRU2.

"The increased pace of cloud adoption combined with an improving economy in Europe continues to drive broad-based demand for our colocation services across our entire footprint," said David Ruberg, Interxion's chief executive officer. "With continuing demand from multiple communities of interest, these investments will allow us to meet the needs of our expanding customer base by adding approximately 15,500 square meters of equipped space. When combined with previously announced expansion projects, Interxion now has active expansion projects across its entire 11 country footprint totaling over 33,000 square meters which will increase the company's equipped space by over 25% compared to the end of 3Q 2017."