Manufacturers of plastic optical fiber and related technologies have long touted the medium as an alternative not only to copper but glass for wired communications applications. Yet, despite some success in aircraft, automotive, and industrial applications, plastic optical fiber hasn't made much of a dent with service providers. Telefónica, however, recently announced the successful completion of gigabit home network trials with the technology. The confluence of factors that led to these trials may signal that network operators may finally see a role for plastic in their networks. 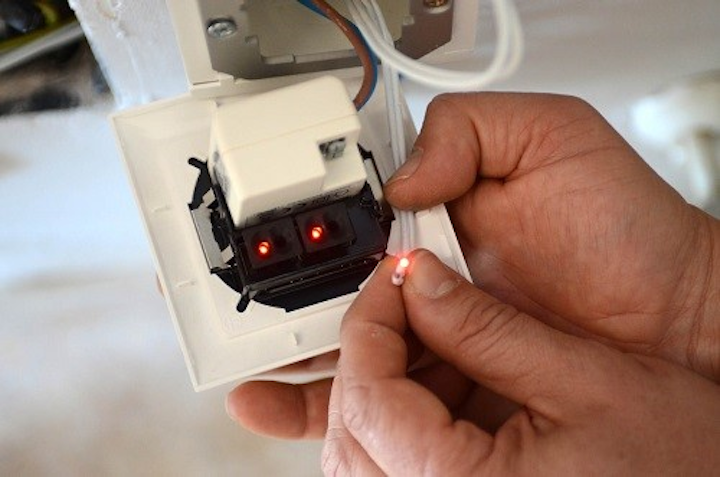 Manufacturers of plastic optical fiber and related technologies have long touted the medium as an alternative not only to copper but glass for wired communications applications. Yet, despite some success in aircraft, automotive, and industrial applications, plastic optical fiber hasn't made much of a dent with service providers. Telefónica, however, recently announced the successful completion of gigabit home network trials with the technology. The confluence of factors that led to these trials may signal that network operators may finally see a role for plastic in their networks.

Almost as good as glass

Plastic optical fiber (or "POF," as many of its backers call it) aims to address many of the same applications as glass fiber, albeit via a different material. Step-index fiber made from polymethylmethacrylate (PMMA) is the most commonly discussed approach for communications applications, although there has been work on graded-index fibers based on other polymers as well. (POF also has been touted for lighting and signage requirements, as well as for use inside consumer devices and in sensing applications.)

The technology also has deployment advantages over glass fiber, its makers have insisted. For example, the fiber has a core area typically of 1 mm, larger than glass, which makes coupling easier; the fiber also is simpler to handle and requires less complex tools. It has been less bend sensitive than glass as well, although the advent of bend-insensitive glass fiber has diminished this advantage in recent years. POF typically works with LEDs in the 650-nm window, which makes it eye safe – an advantage that would better enable self-installations at the customer premises. The overall system generally doesn't require as much power as glass-based networks as well.

However, POF doesn't offer the same reach/capacity benefit as glass fiber, which is why operators have shunned the technology for the outside plant. Until recently, POF transceivers generally topped out at 150 Mbps over 50 m in Ethernet applications and 250 Mbps with proprietary approaches. And, until recently, most in-building applications haven't required fiber-scale capacity; copper (frequently coax) and WiFi have met most needs.

These factors have left POF adherents to focus on in-building networks where copper isn't an option and where WiFi falters – mainly, where the building's materials deaden WiFi signals and prevent full coverage, while limited duct space and interference issues prevent technicians from snaking copper communications cables alongside existing electrical wiring. Such environments are more common in Europe than the U.S., which is why most of the prominent trials of POF in the West, including those conducted by Telefonica, Swisscom (which invested in a POF transceiver vendor), Orange, and Telecom Italia, have occurred on that side of the Atlantic. The European Community also has funded research projects such as "Plastic Optical Fibre for Pervasive Low-cost Ultra-high capacity Systems" (POF-PLUS) in 2008 to further expand POF's capabilities.

Two factors have led to a recent increase in interest in POF for home networks. One is the gigabit broadband phenomenon, which has exceeded the performance limits of many existing in-home copper and wireless networks. The other is a new IEEE Ethernet specification that provides a pathway toward POF support of gigabit transmission rates.

Of course, WiFi has advanced to accommodate gigabit speeds, and new technologies and specifications efforts for copper infrastructure, from Gfast to MoCA Access, promise to do the same for such media. Still, the problem of what to do with troublesome buildings in Europe remains – which is where the Telefónica trial comes in.

Telefónica paired POF with gigabit WiFi, using the POF as a backbone to connect wireless access points and a WiFi amplifier around the house to circumvent potential WiFi interference obstacles. The service provider says the cabling can be deployed through a variety of conduits within the home "without connectors and at a cost considerably lower than glass fibre."

What Telefónica didn't say was when, if ever, it would use the technology in mass deployments. Nevertheless, the advent of 802.3bv should provide incentive for other operators in Europe and elsewhere (Latin America is sometimes cited as an appropriate market) who have tested POF at lower transmission rates to look at the technology again. The time may finally have arrived when POF takes its place alongside glass fiber in broadband services delivery.