Virgin Media, which earlier announced a significant upgrade in its use of fiber to the home (FTTH) technology as part of its Project Lightning infrastructure upgrade effort (see "Virgin Media plans UK FTTP deployment"), has unveiled a list of 10 communities in which it will roll out FTTH this year. 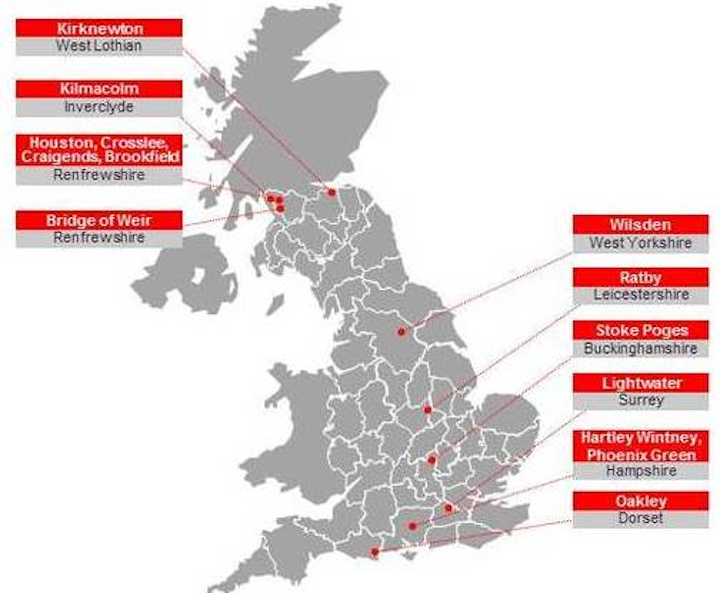 Virgin Media, which earlier announced a significant upgrade in its use of fiber to the home (FTTH) technology as part of its Project Lightning infrastructure upgrade effort (see "Virgin Media plans UK FTTP deployment"), has unveiled a list of 10 communities in which it will roll out FTTH this year.

Virgin Media selected the 10 locations, four of which are in Scotland, via its ‘Supercharging Local Communities' initiative. The service provider opened an online program at the end of this past February through which residents interested in receiving FTTH could register. More than 7,000 people registered between February 29 and April 29, Virgin Media said.

The 10 communities that came out on top include (see map above):

"This is fantastic news for the communities who will now be able to benefit from all that ultrafast broadband offers. I'm particularly pleased to see almost half of them are in Scotland," said Digital Economy Minister, Ed Vaizey. "Continued commercial investment like Virgin Media's ‘Project Lightning,' together with the rollout being delivered by the UK Government and local authorities, means more UK homes and businesses will benefit from faster speeds, whether they're in the remote countryside or in city centers."

The company says its "narrow-trenching" FTTH deployment technique, which reduces the width of the cable trench from around 40 cm to 10 cm, enables its engineers to deploy up to 100 m of fiber-optic cable in a day.

Virgin Media says it will reopen the registration process to help prioritize the next wave of FTTH deployment.