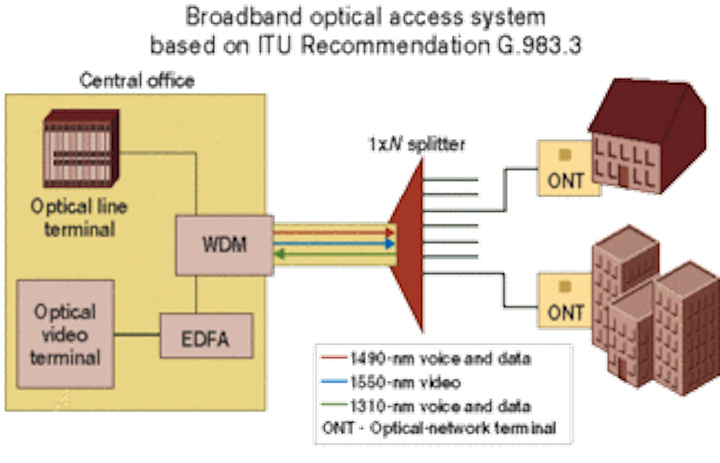 The imminent challenges faced at the installation stage of the fiber links and passive components in passive optical networks (PONs) require a new look at the standard testing technology. Among other challenges, a transmission wavelength at 1490 nm creates particular difficulties for an optical time domain reflectometer (OTDR), the equipment traditionally used to test and characterize fiber-optic links. OTDRs must now face high loss and difficult signal recovery conditions when testing through splitters. Here's a look at the major testing challenges during PON installations and some testing procedures.

Many network equipment and component vendors have accepted ITU G.983.3. As such, optical access systems composed of an optical line terminal (OLT), optical-network terminal (ONT), WDM coupler, and 1×N splitter are being installed today by many fiber-optic-network operators (see Figure 1). 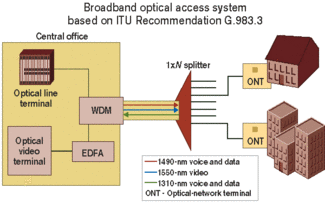 Many in the industry believe that 1550-nm testing is enough to cover the 1490-nm region. That is generally true for newer fiber that was installed in the late 1990s or more recently, especially the G.652C low water peak fiber. However, this practice is questionable for older fiber deployed in the early '90s, prior to the existence of G.652C when the water peak (E-band) was not attracting so much interest. For this reason, many fiber-optic test equipment manufacturers now offer 1490-nm testing functionality on their products developed for PON testing. The main optical tests performed during PON installation include:

Ideally, the PON should be tested after each segment is installed. For example, once the cabled fiber is installed, end-to-end tests should be performed between the fiber end and OLT in the central office (CO). This segment, the inside plant, is important to characterize because it includes many closely spaced events such as connectors, tie cables, mechanical splices, or fusion splices. The tests should be performed bidirectionally, if possible. Bidirectional testing is important because it allows the averaging of loss values and because several events such as mismatched core size generate different loss levels depending on whether the light comes from one direction or the other.

Traditionally, power meter and source have been used to characterize the inside plant because the OTDR's dead zone was not good enough to measure all the closely spaced events. Now, test manufacturers offer OTDRs with an event dead zone of 1 m and an attenuation dead zone of 6 m, thus allowing the location of every event as well as any macrobends that might have been induced during deployment. Macrobends are usually unwanted events generated when a fiber is bent above its bend radius (tie-wrap too tight, etc.), and can be easily detected by comparing the loss at 1310, 1490, and 1550 nm. Indeed, macrobends will have more significant losses at higher wavelengths (1550 nm) than at lower ones (1310 nm).

Testing through splitters is not a problem with a PON-tuned OTDR. In fact, traditional OTDRs identified losses as high as those of end-of-fibers—between 3 and 7 dB, depending on the user's settings. By modifying the OTDR analysis and tuning the OTDR signal recovery after the splitter loss, as well as the end-of-fiber loss limit, OTDRs can test through splitters with losses up to 20 dB.

It is also recommended to test from the CO toward the splitter(s), all the way to the ONTs, which can be accomplished by performing a point-to-multipoint OTDR test. However, the point-to-multipoint test is only possible if drop fibers from the splitter to the ONTs are all different from one another. Otherwise, the test is useless because reflections and backscattering from each ONT branch will appear in the trace (see Figure 2).

Figure 2. An optical-time-domain-reflectometer test from the central office to the splitter all the way to the optical-network terminals (ONTs) is recommended when installing passive optical networks. However, this test is only possible if the drop fibers are separate from one another. Otherwise, the test is useless because reflections and backscattering from each ONT branch will appear in the trace.

After splicing the coupler to the fiber from the CO, it is recommended to characterize the coupler for loss and backreflection to make sure these measurements are in accordance with manufacturer specifications. Characterization is performed using an OTDR combined with a bare fiber adapter and pulse-suppressor box. This combination of tools is used to test the fiber from the coupler output ports toward the OLT in the CO to characterize the losses of the splitter ports' first events at 1310, 1490, and 1550 nm for each port. Only the use of a pulse suppressor will allow that; otherwise, the losses of the splitter would be within the OTDR dead zone and won't be able to be characterized. The reflectance of the coupler ports should be –35 dB or better, as per ITU-T G.983.1.

The total loss budget requirement for the PON, based on ITU Recommendation G.983.4, is 22 dB for Class B PON and 27 dB for Class C PON. (Class B and Class C are differentiated by laser power and optical-component quality.) This loss budget is really tight, especially when high-port-count splitters are used in the design. The splitters in a PON cause an inherent loss because the input power is divided between several outputs. Splitter loss depends on the split ratio and is about 3 dB for a 1:2 splitter, increasing by 3 dB each time the number of outputs is doubled. A 1:32 splitter has a splitter loss of at least 15 dB. This loss is seen for both downstream and upstream signals. Combine the losses of the WDM coupler, splices, connectors, and fiber itself, and it is easy to understand why a precise bidirectional measurement of end-to-end optical loss at the installation is a must.

In addition to the optical loss, the end-to-end link ORL is very important to measure. Undesirable effects of ORL include interference with light-source signals, higher bit-error rate in digital systems, lower system optical-signal-to-noise ratio, strong fluctuations in the laser output power, and permanent damage to the laser.

Some optical loss test sets (OLTSs) include loss measurement and ORL functionalities in the same unit. This type of test equipment can best perform loss and ORL measurements on each transmission link of a PON (see Figure 3).

Figure 3. This total loss budget for ITU Recommendation G.983.3-based passive optical networks (PONs) is 22 or 27 dB, which is tight, especially when high-port-count splitters are used in the design. It is critical, therefore, to perform bidirectional optical loss and optical return loss (ORL) measurements on each transmission link of the PON during installation. New optical loss test sets offer both optical loss and ORL functionalities in the same unit.

Finally, the pursuit of significant technology development in the area of PON testing is underway. OTDR and OLTS instruments fit the testing needs at the installation stage. New test equipment is also being developed for use at the ONT turn-up and maintenance stage. Stay tuned.