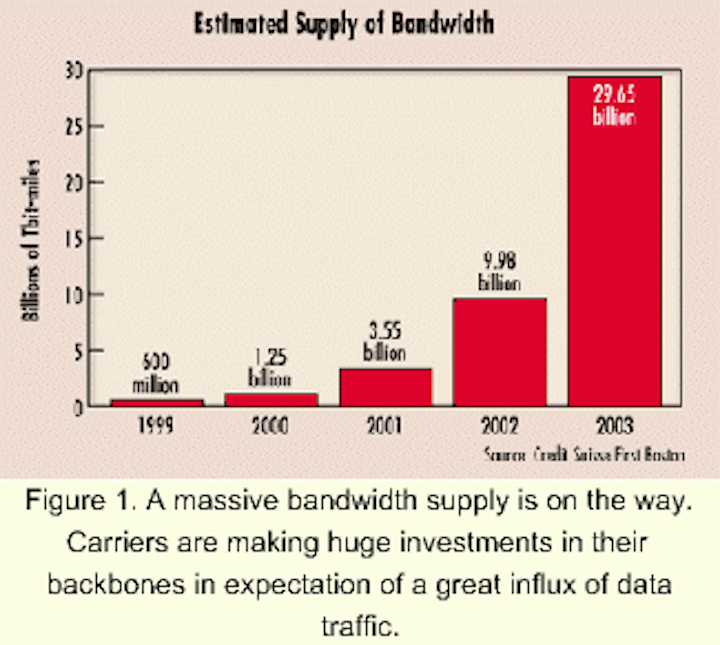 To migrate from overlaid networks to a single multiservice architecture, carriers will need a new edge routing platform.

As Internet Protocol (IP) traffic increases, the communications industry continues to invest heavily in high-capacity optical networks. This vast build-out and the availability of cost-effective IP switches to support an extremely efficient IP routing infrastructure are collapsing existing networks' multiple layers. It's no longer necessary to run IP over ATM over SONET over the optical layer. Instead IP over SONET, or directly over DWDM, eliminates this overhead. In the new network-also known as the optical Internet-IP/Multiprotocol Label Switching (MPLS) transport is emerging as a convergence layer that will improve performance and simplify the infrastructure. 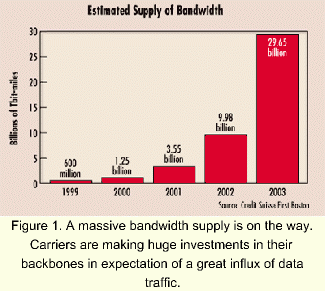 Figure 1. A massive bandwidth supply is on the way. Carriers are making huge investments in their backbones in expectation of a great influx of data traffic.

Service providers must focus on ways to utilize this abundant capacity and the flexibility of their IP/optical backbones as a common transport infrastructure for all network services. For services such as ATM, frame relay, and time-division multiplexing (TDM) private lines, the IP/optical backbone is being fortified with carrier-class quality-of-service (QoS) capabilities. Carrier-class IP networks must also attain the same SONET-grade levels of service availability that today's overlay networks exhibit. To this end, a new class of fault-tolerant edge routers is emerging to transform services for delivery on IP/MPLS networks.

By 2002, IP traffic will represent more than 90% of total public-network traffic, according to RHK Inc. (see Figure 2). While IP traffic is growing at an explosive rate, service-provider investments in optical technology and ultra-high-speed IP routers are growing faster than service revenue. Service providers will have invested more than $70 billion in core- routing and transmission equipment by 2003, reports RHK. Yet, revenues from IP services will only approach $25 billion in 2003, just 30% of the potential market. 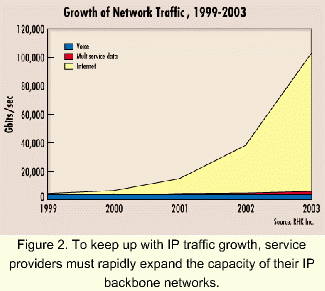 Figure 2. To keep up with IP traffic growth, service providers must rapidly expand the capacity of their IP backbone networks.

This revenue shortfall needs to be rapidly supplemented. The most promising source of additional revenues will come from delivering traditional services such as ATM, frame relay, and TDM private-line services over these new IP networks. These traditional services are expected to earn $50 billion in revenues in 2003, reports RHK. By migrating these services to the IP infrastructure, service providers have an opportunity to address the full $75-billion market for ATM, frame relay, IP, and TDM services to bridge the revenue gap.

To take advantage of this revenue opportunity, service providers need to upgrade their IP/optical networks for the carriage of additional services by focusing on the following areas: 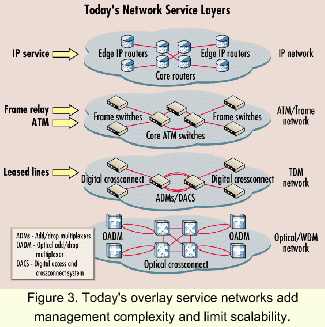 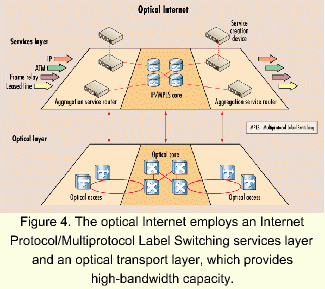 The IP/MPLS core consists of ultra-high-capacity switching/ routing devices from companies such as Avici Systems, Cisco Systems, and Juniper Networks. The development of these core gigabit and terabit IP/MPLS switch/routers continues to focus on increasing the delivery rate of packets and enhancing the QoS capabilities needed for multiservice IP-based transport.

Aggregation service routers are a new class of edge device designed to terminate a large volume of multiservice traffic (ATM, frame relay, IP, and TDM) and transform it for routing over the IP/MPLS core. Located at the carrier's point-of-presence (POP) or super-POP, these next-generation devices replace traditional IP edge routers to give the optical Internet a scalable, high-performance multiservice capability.

Within the aggregation service router, ATM, frame relay, and TDM services are transformed into IP packets for transmission over the IP/MPLS backbone. To adapt these services, the aggregation service router performs wire-speed packet processing to classify and transform the traffic in real time, even on high-speed optical links. Using emulation, non-IP packets, circuits, and virtual circuits are encapsulated within IP streams that are tunneled across IP or IP/MPLS networks.

Carrier-class aggregation service routers must support a vast number of connections and subscribers, while measuring up to the five-nines of service availability evidenced in the public-switched telephone network.

A robust optical transport layer provides the required high-speed network capacity. At the edges, the optical access network consists primarily of SONET/ SDH add/drop multiplexers and an emerging class of multiservice provisioning platforms (MSPPs) that may also integrate DWDM technology. The function of an MSPP is to groom service feeds into optical payloads with the emphasis on payload efficiency; MSPPs have limited service intelligence. The optical edge platforms, in turn, connect to the metropolitan/interoffice infrastructure or the optical core.

The optical core consists of optical crossconnect systems and long-haul DWDM systems. Within the optical core, the emphasis is on low-cost transport, payload efficiency, and efficiency of bandwidth management.

Carriers have built fault tolerance into their traditional telephone networks using redundant facilities and fault-tolerant telephony switches. Dial tone is a prime example of maximum network reliability in voice networks. For the optical Internet to become the backbone for the carriage of all services, including mission-critical services such as private leased lines, every element of the architecture must be resilient. It must achieve the same level of fault tolerance that exists in today's voice network. 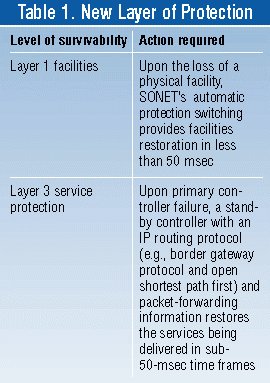 In the rush to expand their IP networks, carriers have deployed enterprise-grade routing equipment. These products are not particularly fault-tolerant. Traditional IP edge routers represent a single point-of-service failure. However, with IP services in such demand, service providers have accepted these limitations.

When an enterprise-class router loses its primary control circuitry and operation falls back to its redundant controller, the impact on end users is typically an outage of 5-15 minutes, the time it takes to re-converge at the IP layer. Restoring the service requires synchronizing the routing states and packet-forwarding tables to reflect the status of the service before the failure. Thus, the failure of a single router can devastate service availability. As IP-based services become mission-critical, several-minute outages are no longer acceptable.

If the optical Internet is to succeed, fault tolerance must be brought to the service edge. A new class of fault tolerant routers is needed to provide protection at the service layer and support redundancy of routing states and tables. This capability is essential to restore services with SONET-like speed of less than 50 msec to eliminate a point of failure (see Table 1). 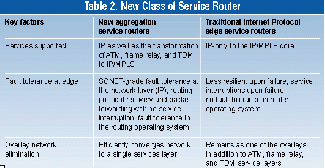 As carriers migrate to the optical Internet architecture, the new aggregation service routers will address many of the limitations of existing IP routers. It is designed for multiservice transport and providing protection at the service layer (see Table 2).

Bringing resiliency to IP routers is not a trivial task. It requires a ground-up approach to router system design, including a resilient hardware architecture and fault-tolerant operating system that together provide a fast and reliable data infrastructure. Next-generation operating systems must allow routing information to be dynamically mirrored among multiple router control elements.

Alex Dobrushin is vice president of marketing and Danny McPherson is director of architecture at Amber Networks (Santa Clara, CA). For more information, visit the company's Website at www.ambernet works.com.