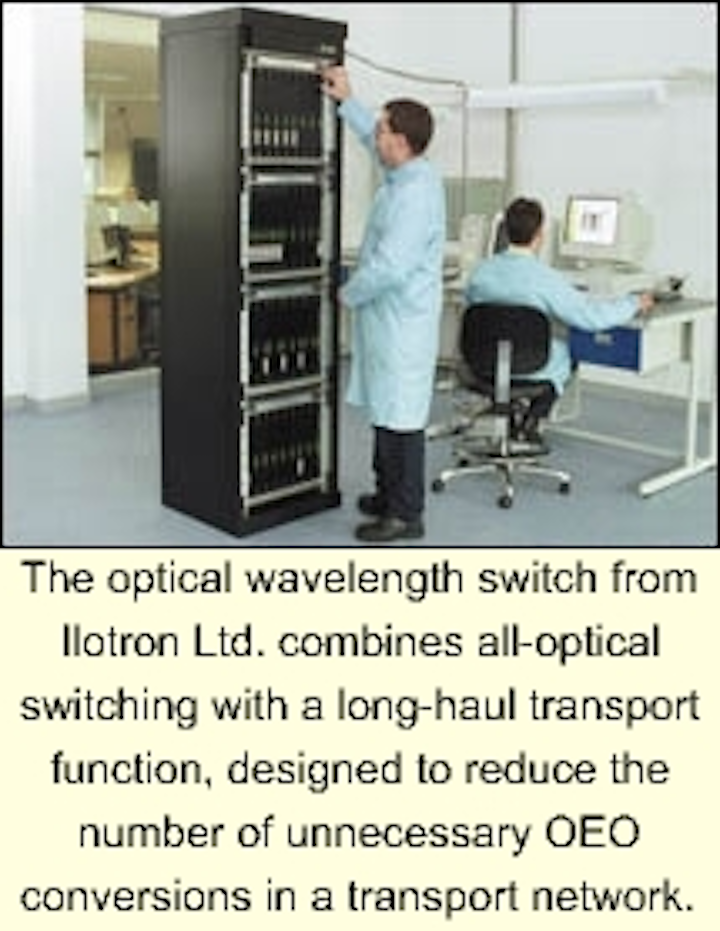 In October 2000, Corvis Corp. (Columbia, MD) announced that it was shipping an all-optical switch that integrates all-optical switching with long-haul transmission. Since then, several startups have announced switches based on a similar model, including Cinta Networks (San Jose, CA), LuxCore Networks Inc. (Atlanta), and U.K.-based Ilotron Ltd., whose optical wavelength switch (OWS) made its U.S. debut at OFC (Anaheim, CA) in March. Currently in the trial stage with British Telecom, Ilotron's OWS is scalable, modular, offers "point-and-click" provisioning, and enables carriers to employ a "pay-as-you-grow" approach. 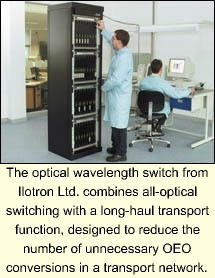 The optical wavelength switch from Ilotron Ltd. combines all-optical switching with a long-haul transport function, designed to reduce the number of unnecessary OEO conversions in a transport network.

Ilotron hopes to differentiate itself based on its pragmatic approach to all-optical switching. "If you go back 12 months, everyone was largely selling religion. It was very much about 'Isn't all-optical networking wonderful?' and 'It's really cool technology,'" explains Scott White, vice president of business development. Scalability, power consumption, footprint size, and, in particular, capital costs are at the forefront of carriers' concerns. Ilotron has designed its switch to meet these real-world parameters.

"While having a nice, dynamic switch is great from an operational perspective," says White, "the only way you can actually affect capital cost, space, and power consumption is by changing the network architecture to reduce the amount of OEO [optical-electrical-optical] conversions in the network."

"But you can't quite get there today," he admits. The reason is two-fold. First, no matter how good an ultra-long-haul solution is, some form of signal regeneration is still necessary when the wavelength is too long or when switching nodes introduce noise that builds up over time and degrades the signal quality. The OWS mitigates this problem via a nonintrusive feature called selective optical regeneration, provisioned on an as-needed basis. Rather than establishing dedicated regeneration points for each wavelength, the OWS enables carriers to regenerate only degraded signals, while the strong signals continue through the system uninterrupted.

"Eighty percent of the traffic at any one node is through-traffic," explains White. "It just needs to be switched on to its final destination, and we can handle that all-optically. The 20% of the traffic that we do need to drop into the electrical domain, we have these shared sets of transponders sitting off to one side that can be dynamically connected. The switching fabric is intelligent enough and flexible enough to connect those trans-ponders dynamically into any particular wavelength on any particular fiber."

The shared transponders are also used for wavelength conversion, which is the second reason why true all-optical networking is not yet a reality. "You can try to make sure each end-to-end wavelength path has its own color of light end-to-end," says White, "but as you add new circuits to the network dynamically, inevitably you start to run into problems. The color of light you want to use halfway through the network is maybe being used by something else, so you would need to change colors." Today, the only commercially viable way to do wavelength conversion is through a tunable laser in an OEO transponder, which is the method Iltron's switch employs.

The core switching fabric that handles all the switching and add/drop multiplexing is currently based on OMM Inc.'s (San Diego) two-dimensional micro-electromechanical systems (MEMS). However, Ilotron has constructed the OWS to support other technologies, including three-dimensional MEMS or Agilent's bubble technology, with a simple card-level change.

This flexibility may prove to be a big advantage, claims Sterling Perrin, senior analyst of optical networking at IDC Corp. (Framingham, MA). "MEMS has the lead right now," he explains, "but these things need to be tested in real-world networks, and another technology could come along that's more advanced, more resilient, less costly, and gets the job done better. If that happens, and you are married to one particular very early-stage technology, then you're in trouble."

While IDC predicts that the market for optical switches and crossconnects will swell from $76 million in 2000 to $5.7 billion by 2005, Perrin warns that the bulk of the revenue will come from electrical core switches during this period. "The electrical core switches have proven that they work and are going to get the job done for the next couple of years," he says. "We really see the all-optical products starting to appear late in 2002 or 2003, first in the core and then branching out closer to the edge as time goes by."

The biggest challenge for companies like Ilotron, then, is patience. "If you're betting on a bleeding-edge market, you've got to have the funds and the system in place to wait for that market to appear," says Perrin. "And that is a risk."

Ilotron, which secured $10 million in initial funding last year, does have a long-range plan. The OWS is just the first in a product line that will also include the optical packet switch, an intelligent optical add/drop multiplexer, and a network-management system.