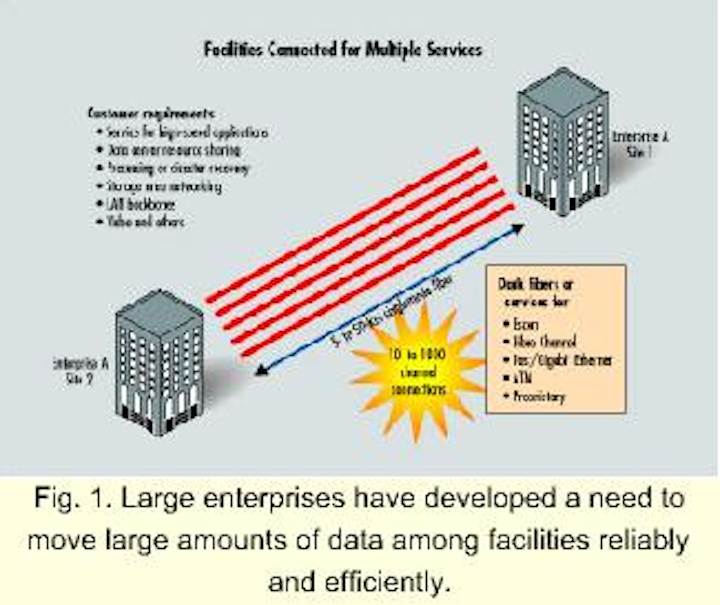 Given the demands placed upon them by today's WDM networks, optical amplifiers can no longer be merely passive gain blocks.

Enterprises need superior network performance, increased bandwidth, and additional capacity to run their day-to-day business applications effectively and maintain competitive advantages in their markets. At the same time, networks that were once thought to provide ultimate scalability have long since run out of capacity. Data traffic will greatly exceed voice traffic in volume, as Internet protocol communications have proliferated to near ubiquity. Video applications are becoming more prevalent as well. The networking transport and access infra structures of metropolitan carriers are stressed to the point of buckling under the weight of heightened, heterogeneous demands on the available bandwidth, and that trend is only going to intensify.

In the early 1990s, large banking and financial institutions in metropolitan cities were the first to seek a solution for high bandwidth in the metropolitan area: leased dark fiber. In 1996, wavelength-division multiplexing (WDM) and dense WDM (DWDM) products were introduced to provide improved bandwidth performance over private dark fiber. These high-performance private networks have been a significant commitment in time and resources from the information-technology (IT) departments of enterprises, but they have moved forward because there has been no other reasonable alternative for high-speed metropolitan services.

Several local-exchange carriers (LECs) have recently identified this need as a significant opportunity for new revenues and a new type of service that will attract new customers. These carriers are now offering "leased wavelengths" using a protocol-transparent optical-networking platform that uses the installed fiber base and provides capacity growth using WDM and DWDM. Such optical-networking solutions, when designed specifically for transport across metropolitan areas, optimize the performance of existing fiber-optic infrastructures and economically deliver a full, varied range of support for mission-critical data applications.

Among the major networking issues facing corporations today are establishing and enabling the growth of systems for disaster recovery, storing data, clustering high-speed computers for parallel processing, handling the facility moves associated with mergers and acquisitions, and implementing multimedia business tools. One way to address these issues is to connect facilities in a seamless metropolitan network that cost-effectively supports the required high-speed data protocols such as enterprise systems connectivity (Escon), coupling link, Fibre Channel, and Gigabit Ethernet. For disaster-recovery applications, the enterprise may require as much as 20 Gbits/sec of dedicated bandwidth (see Fig. 1). 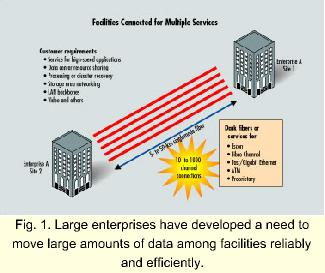 Fig. 1. Large enterprises have developed a need to move large amounts of data among facilities reliably and efficiently.

Traditionally, the LEC has pushed its existing Synchronous Optical Network (SONET) transport or Asynchronous Transfer Mode (ATM) access services as a best and only solution. SONET and ATM are excellent solutions for aggregating multiple low-speed (less than OC-3 155-Mbit/sec) data applications and multiple sites onto one common network that has access to the wide area network (WAN). However, these approaches are too costly, cumbersome, and inefficient for the high-speed applications needed among a few facilities within the metropolitan area (see Fig. 2). 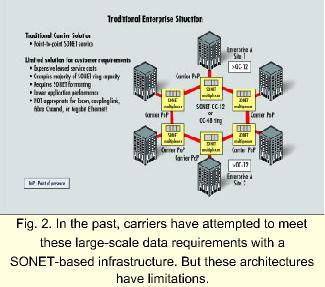 Fig. 2. In the past, carriers have attempted to meet these large-scale data requirements with a SONET-based infrastructure. But these architectures have limitations.

Industry observers have noted this trend. The real push for high-speed, transparent LAN services is originating with the metropolitan enterprises, according to Virginia Brooks, vice president of networking and telecommunications at the Aberdeen Group (Boston). According to Brooks, these enterprises are willing to pay for the high-bandwidth connectivity required to run these applications as long as it is provided at a price-to-bandwidth ratio that is worthwhile. Until the emergence of cost-effective optical-networking solutions, the options available to enterprises had not been compelling, she concludes.

Carriers have long recognized the ability of WDM to multiply fiber capacity and create "virtual channels." Incoming application traffic is converted to specific wavelengths and multiplexed. Multiple channels are transmitted over the same optical-fiber strands. There is no performance degradation or specific protocol requirements because lightwaves of different lengths will not interfere with one another during transmission and are converted back to their original formats at output. The fiber's base bandwidth is multiplied, and if the WDM transport system is designed appropriately, each wavelength can support any protocol.

When the tremendous increase in Internet traffic and the worldwide liberalization of the telecommunications market exhausted fiber infrastructures in 1995, WDM began to be deployed extensively in long-haul SONET networks to alleviate the situation. Today, carriers are focusing on WDM and DWDM to address the explosion of voice, data, and Internet services required by their enterprise customers in metropolitan areas. 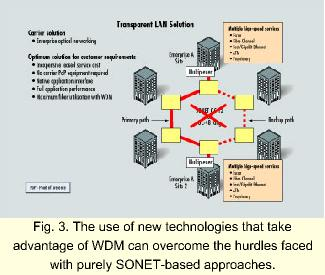 Fig. 3. The use of new technologies that take advantage of WDM can overcome the hurdles faced with purely SONET-based approaches.

Today's typical enterprise wants to operate in a virtual LAN, with resources available consistently across a single, seamless interconnection of all of its facilities. The network should accommodate user moves, additions, and deletions simply. Regular data backups should occur quickly-instantly, in some cases-and encompass an enterprise's entire system. 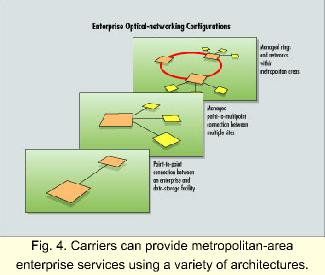 Optical networking can deliver these benefits-and at a price-point that moves them out of the realm of luxury and into one of requirements that are economically justifiable. There are ad ditional benefits for the corporate customer:

The primary benefit for carriers is the opportunity to realize new revenues by cost-effectively introducing high-speed, protocol-transparent data-service offerings to an enterprise market that is highly anticipating them. The emergence of cost-effective optical-networking solutions developed by vendors experienced with the issues facing enterprise network managers stands to create a new, fertile market for both large incumbent carriers and smaller, more narrowly focused service providers. A host of other benefits makes optical-networking service delivery an enticing prospect for carriers:

These are the cost-of-business questions enterprises are already considering, and a consensus is gaining strength as more and more carriers introduce affordable leased WDM and DWDM service offerings for corporate customers. 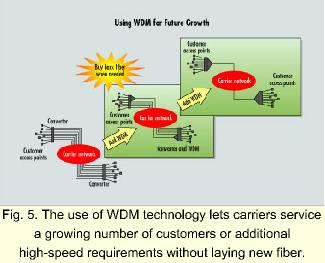 Fig. 5. The use of WDM technology lets carriers service a growing number of customers or additional high-speed requirements without laying new fiber.

But while a new market is waiting for carriers, it won't wait for long, according to Aberdeen's Brooks. The carriers that act quickly to address this demand will position themselves at the forefront of a burgeoning market, she feels, while those who don't will soon find themselves playing catch-up.

The bottom line: With optical-networking solutions designed from the ground up for metropolitan-enterprise transport, carriers are realizing full return on their investments in less than one year. The technology is here. The market has arrived. Enterprise optical networking will flourish, as will the service providers who act now to deliver it. u